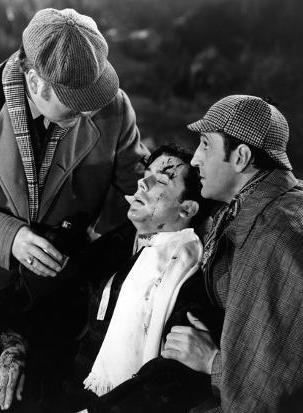 Watson (Nigel Bruce) and Holmes (Basil Rathbone) come to the aid of Sir Henry (Richard Greene) on the Devonshire Moor in director Sidney Lanfield’s 1939 adaptation of The Hound of the Baskervilles..


What one man can invent, another can discover


Born on this day (May 22) in 1859, Arthur Conan Doyle trained as a doctor. Though he practiced medicine for a living, he aspired to be an author. As a result, he is remembered, not for his prescient advocacy of compulsory vaccination — he opposed the anti-vaxxers of his day in an 1887 newspaper article — but for his creation in that same year of a character called Sherlock Holmes. English literature’s best known consulting detective, Holmes made his debut in A Study in Scarlet, the first in a series of “reminiscences” by former British Army surgeon Dr. John H. Watson. Fame followed for Dr. Doyle, who added three novels and 56 short stories to the canon over the next 40 years. Public enthusiasm for Holmes has never waned, and in 2012, Guinness World Records declared him to be the “Most Portrayed Literary Human Character in Film & TV”. (At the time, fans of the undead Dracula, created in 1897 by Doyle contemporary Bram Stoker, argued that their favourite vampire count’s 274 screen appearances clearly beat Sherlock’s then-254.) Tomorrow, Sherlockians will mark Doyle’s 160th birthday by tuning into the season seven premiere of Elementary, the CBS-TV series following the adventures of a 21st century Holmes and his partner, Dr. Joan Watson. Reeling Back celebrates by recalling a Holmesian story set 130 years ago (1889) and filmed 80 years ago (1939): director Sidney Lanfield’s The Hound of the Baskervilles.

THE HOUND OF THE BASKERVILLES. Written by Ernest Pascal. Adapted from Sir Arthur Conan Doyle's 1901 serialized novelette. Music by David Buttolph, Charles Maxwell, Cyril J. Mockridge and David Raskin. Directed by Sidney Lanfield. Running time: 80 minutes. General entertainment. WHEN YOUNG ARTHUR CONAN Doyle, a suburban Southsea physician and the proprietor of a modest medical practice, read Fergus Hume's 1886 novel The Mystery of the Hansom Cab, he was disappointed. Hume's book was a great popular success.
As far as Dr. Doyle was concerned, Hume's detective work was second-rate. He believed Hume's characters were inferior to the ones that Doyle himself had created at approximately the same time.
No matter. So what if the critics had virtually ignored his A Study in Scarlet, published in the 1887 edition of Beeton's Christmas Annual? Doyle was working on an historical novel — his real ambition was to write historical novels — and if the public wasn't interested in his consulting detective, one Sherlock Holmes of 221B Baker Street, London, that was its loss.
Doyle wasn't all that attached to old Holmes. Indeed, when the public did discover his detective stories, narrated by Holmes's friend and tireless chronicler, Dr. John H. Watson, their author was underwhelmed. Throughout his literary life he tried to rid himself of the series and the character — "this monstrous growth," as he was later to describe Holmes — and go on to more important matters.
Readers, however, regarded Holmes as a living being. When the movies came along, filmmakers wasted no time in making him the screen's first detective. A copyright was issued to the American Biograph Company in 1903 for a film called Sherlock Holmes Baffled.
Since then, the great sleuth has made more than 90 screen appearances — last year [1975], he was seen in a comedy, The Adventure of Sherlock Holmes' Smarter Brother.  Later this year he will turn up in a new adventure, The Seven-Per-Cent Solution, a hitherto "unknown" story recently "discovered" by best-selling novelist Nicholas Meyer.
Among the "known" stories, the most famous is The Hound of the Baskervilles. Filmed no fewer than eight times, it has been done three times each by the Germans and the English, and twice by the Americans. Holmes fans are generally agreed that the 1939 U.S. version is the best of the lot.
So, here it is again on the big theatre screen, approximately 80 minutes with Holmes and Watson on the Devonshire moors, with mists swirling about their heels and the howl of the legendary hound echoing in their ears. The story has survived more or less as Doyle wrote it.
It opens in 1889, with the death of Sir Charles Baskerville, the victim of an apparent heart attack. His friend and physician, Dr. James Mortimer (Lionel Atwill), seeks out Holmes (Basil Rathbone) and tells him that "every Baskerville who has inherited the estate has met with sudden and violent death."
It's the hound, Mortimer says, the supernatural nemesis of the Baskervilles since the 17th century. Mortimer fears that it will get young Sir Henry (played by romantically dimpled actor Richard Greene), heir to the properties and in transit from Canada.
Holmes is interested. But, when Henry arrives, he asks Watson (Nigel Bruce), his associate, to go down to Dartmoor in his place. Pressing business in London, you know.
The Hound of the Baskervilles is a study in Hollywood studio filmmaking. It was shot in California, on 20th Century-Fox's backlot London and on a soundstage moor. Sophisticated filmgoers of the 1970s will be fascinated but not fooled by the plaster rocks and papier-mâché mire that thrilled audiences in the 1930s.
This is the kind of story in which atmosphere is everything. Unfortunately, Sidney Lanfield, a director of indifferent light comedies and musical romances, was not up to the task. The film's major success belongs not to him but to screenwriter Ernest Pascal, who adapted the original novelette, and to an experienced cast's ensemble playing.
This is a movie where everybody whoops it up unselfconsciously. The camera seldom fails to record at least three meaningful glances per scene. The general rule for the supporting players, among them John Carradine, seems to have been "when in doubt, skulk."
Rathbone, whose acting always tended to the hambone, slices into the Holmes role with delicious arrogance. A showy fellow, fond of disguises, false beards and demonstrations of his deductive powers, Rathbone's Holmes set the standard for portrayals of the charactor in the public mind.
In much the same way, Nigel Bruce made the Watson part his own. Bumbling and just a bit dense — Doyle called him "rather stupid" — Watson is truly an engaging character, not at all the broad parody that Bruce would turn him into when the success of this first film led to a 14-feature series.
Though certainly a competent effort, The Hound of the Baskervilles can hardly be considered great cinema. Filmgoers of its own time found it fun, and that's the way it should be viewed today.
Its re-release is the result of Seattle showman Randy Finley’s flair for the unusual. He purchased the rights to the 14-film package from Fox, and is in the process of promoting a Holmes revival.
Part of the current program is a short interview with Sir Arthur Conan Doyle. Filmed in 1927, it features the 68-year-old author discoursing on two subjects: Sherlock Holmes and spiritualism. A cheerful, avuncular figure in a pin-striped suit, Sir Arthur proves to be the perfect host for an evening of nostalgic entertainment.

Afterword: Since going to press with the above review, there have been at least a dozen more feature films added, including two starring Robert Downey Jr. as the unstoppable Sherlock. In 2015, Ian McKellen had the title role in the elegiac Mr. Holmes, the subject of an original-to-Reeling Back review. During the same 40 years, television has offered up to 30 new made-for-TV movies and more than a dozen series based on his re-imagined adventures.
Many viewers still treasure actor Jeremy Brett’s portrayal of the great detective over the 10 years of Granada TV’s Sherlock Holmes adaptations (1984-1994), a series that told the stories in their original period settings. Others are convinced that the BBC’s Sherlock (2010-2017), a stylish modern-dress version pairing Benedict Cumberbatch and Martin Freeman as Holmes and Watson, sets the new standard. Personally, I’ve been thoroughly enjoying CBS-TV’s Elementary. Set in modern New York where English actor Johnny Lee Miller’s Holmes consults for the NYPD, it’s been on the air since 2012. A recovering drug addict, this version of Holmes is aided in his struggle by “sober companion” Dr. Joan Watson (Lucy Liu). Series creator Robert Doherty has created a sharp, entertaining vehicle for contemporary social commentary that does Dr. Doyle’s legacy proud.