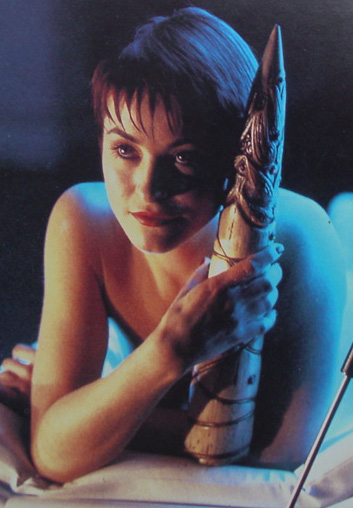 Lady Sylvia Marsh (Amanda Donohoe) brandishes one of many phallic symbols to be found in director Ken Russell’s 1988 shock fantasy The Lair of the White Worm.

More than another cigar


Doubling down on the entendres


The story of Dan Ireland, born on this day (May 11) in 1949, is a tale of three cities. It includes success in Los Angeles, where he is best remembered as a producer and director of offbeat independent films. During a decade in Seattle, he made his mark as a movie exhibitor and co-founder of that city’s influential annual film festival. Though born in Oregon, it all began for Ireland in Vancouver, where he grew up in the vibrant Kitsilano neighbourhood. There, he bonded with schoolmate (and later business partner) Darryl Macdonald over their love of movies. In his teens, Ireland worked as a theatre usher, an entry-level job that led to film booking. In the mid-1970s, he and Macdonald ran the Rembrandt, an independent inner-city cinema. They used that experience (and Ireland’s dual citizenship) to relocate to Seattle, where they restored the then-68-year-old Moore Theater as the Moore Egyptian. In May 1976, inspired by Vancouver’s Varsity Festival of International Films, they founded the Seattle International Film Festival. A decade later, Ireland became head of acquisitions for Hollywood indie distributor Vestron Pictures. Today, Reeling Back adds four Dan Ireland-produced Vestron titles to its archive (with links to each following the Afterword to this posting). Ireland was Ken Russell’s executive producer on the convention-mocking British director’s gleefully Freudian 1998 adaptation of horror novelist Bram Stoker’s The Lair of the White Worm.

Sunday, June 12, 1988.
THE LAIR OF THE WHITE WORM. Based on the 1911 novel by Bram Stoker. Music by Stanislas Syrewicz. Written, produced and directed by Ken Russell. Runniing time: 94 minutes. Restricted entertainment with the B.C. Classifier’s warning: some violence, nudity and suggestive scenes. GOTHIC NOVELIST BRAM STOKER was ill and in pain in 1911, the year that his last story was published. Were he alive today, there’s no telling what suffering the sight of director Ken Russell's fey, deliberately ripe adaptation of his horror fantasy would cause him.
Updated and set in modern Derbyshire, The Lair of the White Worm begins with the discovery of a strange skull in an archeological dig on the property of the pretty, proper Trent sisters, Mary (Sammi Davis) and Eve (Catherine Oxenberg).
Perhaps, suggests local laird James D’Ampton (Hugh Grant), it belongs to the legendary D’Ampton Worm, a dragon slain by the son of his legendary ancestors.
The discovery excites the interest of Lady Sylvia Marsh (Amanda Donohoe), the mysterious mistress of nearby Temple House. Before long, the lady is revealed to be an aficionado of Snakes and Ladders, pre-Christian snake cults and human sacrifice.
Trust Russell to serve up an hallucinatory tale spiced with wickedly written dialogue and convention-mocking imagery. On this round, though, don't trust him to end it with any élan.
Despite a deliciously reptilian performance from actress Donohoe (last seen opposite Oliver Reed in 1986’s Castaway) the inventive Russell comes a cropper, unsure at the end whether he is supposed to be funny, profound or shocking.

Afterword: It was hard not to laugh. The Lair of the White Worm was among the films premiered at the 1988 Vancouver International Film Festival. An event that took itself very seriously, it featured a Ken Russell work that gloried in its irreverence. In the introduction to the above review, I mentioned that the picture’s producer, Dan Ireland, came of age cinematically in Vancouver some 20 years earlier. Like Russell, Ireland had a fine sense of humour, and I like to think that he enjoyed De Düva: The Dove, a short subject shown at the Vogue theatre during the time he worked for Odeon Theatres locally.
Nominated for an Academy Award, the 1968 film was a parody of Ingmar Bergman’s best-known movies, most obviously his 1957 features Wild Strawberries and The Seventh Seal. The actors all spoke their dialogue in mock Swedish (a la the Muppets' Swedish Chef), “translated” in the English subtitles. I’ll never forget the moment that an aggressively masculine young woman named Sigfrid (Madeline Kahn) offers a cigar to the very feminine Inga (Pamela Burrell). What we hear her say is “Phalliken symbolsk?” The subtitle reads “Cigar?” (The whole film can be seen online here.)
Though not mentioned in my review, phallic symbolism was a defining characteristic of Russell’s style. Although my readers might have preferred a clearer description of the director’s “convention-mocking imagery,” my newspaper’s editors really did not. Rereading my brief piece on The Lair of the White Worm, I realize that I was self-censoring quite shamefully. Among the things I might have mentioned was that Bram Stoker’s fatal illness was tertiary syphillis. Worth mentioning now is that the movie was Hugh Grant’s first feature  starring role, coming six years before his major breakthrough in the 1994 Golden Globe-winning Four Weddings and a Funeral.