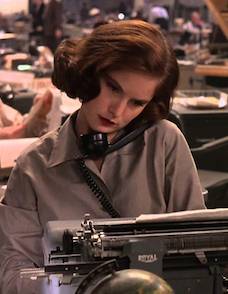 Not a brain in its head


The year once known as 2016 ends today (December 31). There are few positive things to say about it, other than “it’s over.” Tonight’s New Year’s Eve gatherings will be subdued, reflecting moods that are less celebratory than stunned, a kind of PTSD group therapy. Even so, the traditional sentiment — out with the old, in with the new — remains ever hopeful. At midnight, we’ll all hit that annual reset button, and wish loved ones a “Happy New Year.” Someone will sing Auld Lang Syne, (whatever that means) and someone else will remember a movie with a year-end setting. Because filmmakers really love to party, there are dozens to choose among. A picture may begin with a New Year’s Eve celebration that goes catastrophically wrong (The Poseidon Adventure, 1972). A scene key to unfolding of the plot may be set on a New Year’s Eve (The Godfather, Part II , 1974), or the entire action may unfold over the evening (Ocean’s 11, 1960). More usual, though, is the big, satisfying climax that coincides with ringing in the new year (When Harry Met Sally, 1989; Ghostbusters II , (1989); While You Were Sleeping, (1995). That was the choice made by the Coen brothers when they crafted the ending for their fifth feature, a period corporate comedy called The Hudsucker Proxy

THE HUDSUCKER PROXY. Co-written by Ethan Coen and Sam Raimi. Music by Carter Burwell. Co-written and directed by Joel Coen. Running time: 111 minutes. Mature entertainment with no B.C. Classifier's warning. AIN’T IT GREAT?
This morning, open-faced Norville Barnes (Tim Robbins) was an unemployed graduate of the Muncie College of Business Administration applying for a job at Hudsucker Industries.
At lunch time, he's the company’s president, successor to the great corporation’s late founder, Waring Hudsucker (Charles Durning). Untried Youth To Helm Hudsucker says the headline in the great city’s greatest newspaper.
Ain’t we got fun?
With The Hudsucker Proxy, the Coen brothers go for the brass, offering us their take on the all-American corporate comedy, its corn-fed values and the inevitable triumph of the little guy.
It's sort of like 1988’s Tucker: The Man and His Dream, but with toys. You know, for kids.
It’s December 1958, and goofy galoot Barnes is the man with a dream. Guileless, he suspects nothing when smarmy Sidney Mussburger (Paul Newman) stuffs a huge cigar into his wide-open mouth and insists that he sit in the boss’s chair.
We know that the wily executive is up to no good. To maintain control of the multi-national enterprise, he means to depress the value of its stock.
“To make a blue chip investment look like a ticket on the Titanic,” Mussburger puts a patsy in charge. Soon the headlines say Imbecile Heads Hudsucker / Not A Brain  In  His Head.
It’s the Coen brothers, you know? Together director Joel and producer Ethan wrote 1984’s Blood Simple and Raising Arizona (1987), two terrific, stunningly stylish low-rent features.
People noticed. The Coens moved off the frontage road to make more expensive movies like 1990’s Miller’s Crossing and Barton Fink (1991), forgetting their poverty-row roots and becoming ever more self-indulgent and shallow.
The Hudsucker Proxy, like Barton Fink, is derivative and design-driven. It ain’t great fun unless you're really into movies full of references to other movies. Here, the Coens (and their co-writer Sam Raimi) pop a collection of Frank Capra characters into Tim Burton’s Gotham City.
Or is it Richard Donner’s Metropolis? The scene in which the Manhattan Argus editor (John Mahoney) demands better stories on Barnes is swiped whole from Donner’s 1978 Superman picture.
The film’s climax, a New Year’s Eve phantasmagoria with elements borrowed from Capra classics Meet John Doe (1941) and It’s a Wonderful Life (1946), goes well over the top to no good story purpose.
The fantastic set decoration notwithstanding, The Hudsucker Proxy isn’t about much of anything at all. And that’s too bad, because Jennifer Jason Leigh, cast in the Jean Arthur/Lois Lane girl reporter role, is a knockout.
An actress who’s made a career out of playing vulnerable slatterns and brain-damaged bad girls, J.J. is outstanding as a 1930s-style career woman. Here she plays Amy Archer, the brash newswoman who gets her big story by taking a job as Barnes’s personal secretary. A cross between Bette Davis and Katharine Hepburn, her performance is almost worth the price of admission.
Otherwise, it’s just a pretty picture without a brain in its head. The Hudsucker Proxy is what film buffs would expect from a lobotomized Terry Gilliam.

Afterword: Among the young performers who broke through to stardom in director Amy Heckerling’s 1982 teen comedy Fast Times at Ridgemont High, Jennifer Jason Leigh remains my favourite. The daughter of Vic Morrow, she quickly established herself as an actress determined to take on challenging roles, often working in independent films. In Europe, she gave outstanding performances in director Paul Verhoeven’s medieval drama Flesh+Blood (1985) and Uli Edel’s adaptation of Hubert Selby Jr.’s raw inner-city novel Last Exit to Brooklyn (1989). In the U.S., she dominated the screen in Barbet Schroeder’s thriller Single White Female (1992) and Alan Rudolph’s period biopic Mrs. Parker and the Vicious Circle (1994). “She is an interesting, always watchable, and extremely talented young actress,” Danny Perry wrote in his 1991 book Cult Movie Stars. She “is known for doing extensive research (into characters, eras, and so on) before playing even the simplest parts.”
She enhanced her cult status by taking the starring role in David Cronenberg’s eXistenZ  (1999), a highlight in a career that includes more than 60 theatrical features to date. In March, she was finally nominated for an Oscar (for her work in Quentin Tarantino’s 2015 revisionist western The Hateful Eight). That same month, The Guardian newspaper’s Benjamin Lee lamented “Jennifer Jason Leigh spent far too much time lost in the Hollywood wilderness. The undeniably talented actor has been cruelly underused by an industry that never quite knew how to take her, despite a set of fine performances.” Now 54, she was seen last year as Lady Bird Johnson in Rob Reiner’s 2016 feature LBJ. She’ll soon be on view as part of the ensemble cast that David Lynch assembled for his 2017 Twin Peaks miniseries.

See Also: Among the other New Year’s Eve movies in the Reeling Back archive are 1972’s The Poseidon Adventure and While You Were Sleeping (1995).