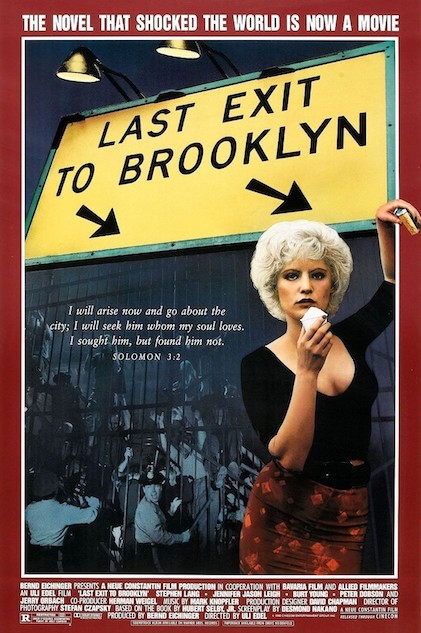 
From the moment she arrived on screen, Jennifer Jason Leigh has been a force of nature. Born on this day (February 5) in 1962, she won our respect (if not our hearts) as Stacy Hamilton, the 15-year-old kid sister whose quest to lose her virginity was central to director Amy Heckerling’s trend-setting 1982 teen feature Fast Times at Ridgemont High. Leigh lost no time establishing her independence from the American movie mainstream. Her talent was recognized by Dutch director Paul Verhoeven, who personally cast her as Agnes, the keystone role in his first English-language production Flesh+Blood. In 1984, she was off to Europe to play a young 16th century noblewoman kidnapped on the way to her wedding. No submissive victim, her character survives rape, demonstrates intelligence and deploys cunning in a refreshing display of female agency in the movies. The daughter of a Hollywood actor (Vic Morrow) and screenwriter (Barbara Turner), Leigh made a career working with such idiosyncratic directors as Robert Altman, David Cronenberg, Jane Campion and Todd Solondz in the sort of edgy roles that critics take delight in. Finally, her performance in Quentin Tarantino’s 2015 Western The Hateful Eight earned her a long-overdue Oscar nomination. In today’s six-feature package (with links to all titles included following the Afterword), we revisit Leigh’s turn as the suicidal prostitute Tralala, in director Uli Edel’s 1990 adaptation of Last Exit to Brooklyn.

LAST EXIT TO BROOKLYN. Written by Desmond Nakano. Based on the 1964 novel by Hubert Selby Jr. Music by Mark Knopfler. Directed by Uli Edel. Restricted entertainment with the B.C. Classifier’s warning "frequent violence, nudity, suggestive scenes and very coarse language."
IT WAS THE TIMES.
There was a war in Vietnam, and something that felt like war in America. It was 1964.
JFK was dead. LBJ was running against bellicose Barry Goldwater for the U. S. presidency. Signs of the the final days were everywhere.
Hubert Selby Jr.'s episodic novel Last Exit to Brooklyn was one such sign. Angry and despairing, it anticipated the age of the underclass in its raw, unrelenting portrait of inner-city degradation.
And now there is a movie version.
A German production with an English-speaking cast, the film's promotion reminds us how controversial Selby’s work once was.
The New York Times called his novel "an extraordinary achievement," while Time magazine dismissed it as the season's "extra special dirty book."
"What will they say now?" asks a full page ad for Last Exit to Brooklyn in the Los Angeles Times.
How about "old bold?"
Though no West Side Story, director Uli Edel's film adaptatiion plays like a museum piece, a mounted and stuffed example of self-consciously daring cinema.
Like so many big bold movies of yore, Edel's feature actually lightens up on its source material, softening Selby's scabrously grim vision. As written by Desmond Nakano, it manages a comparatively happy ending.
The time is 1952. The setting is Red Hook, a brutish industrial neighbourhood in New York's Brooklyn borough.
At one end of the street, Local 3392 of the Federated Metal Workers is in the sixth month of an increasingly bitter strike against Brickman Metals Company. At the other, a U.S. Army base is processing men through to the Korean War.
Maintaining the prevailing mood of joylessness is a vile, violent petty thief named Vinnie (Peter Dobson). The leader of a small gang of unemployed hooligans, he makes life even more miserable for his hope-starved neighbours.
For a narrative, Edel offers the interwoven stories of three terminally lost souls. Bound for bad ends with Vinnie's sneerful help are:
●     Tralala (Jennifer Jason Leigh). A whore with a heart of brass, her own despair leads her to initiate a self-annihilating gang bang. (The incident depicted in the film is not a gang rape, as some sources would have it. The Tralala character offers to “take on” the assembled patrons of a waterfront bar, and her offer is accepted.)
●     Harry Black (Stephen Lang). The union's strike office supervisor, his tormented sexuality eventually finds release in a self-destructive homosexual relationship.
●     George (Alexis Arquette), aka "Georgette." An acknowledged homosexual, his infatuation with the sadistic Vinnie brings him nothing but abuse and suffering.
If Selby's work has any relevance, it is in its stark exposé of the directionlessness that afflicts American society to this day. Edel, unfortunately, fails to come to grips with the wrenching reality of the original material, or the corrosive self-loathing of its characters.
The result is old bold, a stagey, forced feature in which grubby events are given a period Hollywood look. The effect is to distance rather than involve the filmgoer.
Watching Last Exit to Brooklyn, I was tempted to take the advice of Regina (Bernard Zette), Harry's cold-hearted gay lover. "This is getting rather sordid," he says. "Why don't we leave?"

Afterword: Only later did I find out that Last Exit to Brooklyn had been a dream project of director Uli Edel and his co-producers Bernd Eichinger and Herman Weigel since the late 1960s, the time that they were all students at the Munich Film School. Among Edel's graduation projects was a script of the book’s Tralala section. One can only imagine what drew a young artist growing up in the ruins of post-war Germany to Selby’s post-war American hopelessness, but his first English-language feature provided him with the opportunity to move to the U.S. and a television directorial career that continues to this day.
I wasn’t at all surprised to learn that Brooklyn’s own Ralph Bakshi was drawn to it. After establishing his reputation as an adult animator with the 1972 cartoon feature Fritz the Cat  and the Hubert Selby-inspired Heavy Traffic (1973), he set out to adapt Last Exit to Brooklyn to the screen. Reportedly, he secured the author’s permission and signed actor Robert De Niro to provide the voice of Harry Black. The project was stillborn when Bakshi had a falling-out with producer Steve Krantz, and the director went in a new direction that included the politically-incorrect blaxploitation cartoon feature Coonskin (1975), an eclectic fantasy called Wizards (1977) and the first film adaptation of The Lord of the Rings (1978).