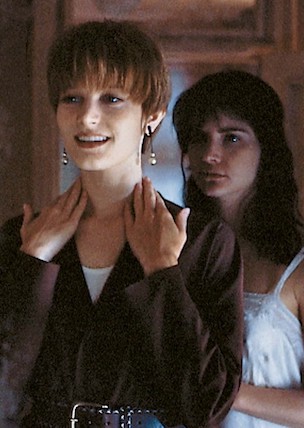 Finding a friend in need


Trapped in a formula gothic tale


From the moment she arrived on screen, Jennifer Jason Leigh has been a force of nature. Born on this day (February 5) in 1962, she won our respect (if not our hearts) as Stacy Hamilton, the 15-year-old kid sister whose quest to lose her virginity was central to director Amy Heckerling’s trend-setting 1982 teen feature Fast Times at Ridgemont High. Leigh lost no time establishing her independence from the American movie mainstream. Her talent was recognized by Dutch director Paul Verhoeven, who personally cast her as Agnes, the keystone role in his first English-language production Flesh+Blood. In 1984, she was off to Europe to play a young 16th century noblewoman kidnapped on the way to her wedding. No submissive victim, her character survives rape, demonstrates intelligence and deploys cunning in a refreshing display of female agency in the movies. The daughter of a Hollywood actor (Vic Morrow) and screenwriter (Barbara Turner), Leigh made a career working with such idiosyncratic directors as Robert Altman, David Cronenberg, Jane Campion and Todd Solondz in the sort of edgy roles that critics take delight in. Finally, her performance in Quentin Tarantino’s 2015 Western The Hateful Eight earned her a long-overdue Oscar nomination. In today’s six-feature package (with links to all titles included following the Afterword), we revisit Leigh’s turn as the too-good-to-be-true roommate Hedra, in director Barbet Schroeder’s 1992 thriller Single White Female.

SINGLE WHITE FEMALE. Written by Don Roos. Based on the 1990 novel SWF Seeks Same, by John Lutz. Music by Howard Shore. Produced and directed by Barbet Schroeder. Running time: 108 minutes. Restricted entertainment with the B.C. Classifier’s warning: "some violence, nudity and suggestive scenes."
ALLIE'S ROOMMATE REMINDS ME of the comic lapel button occasionally worn by working women:
She has PMS. And a gun.
She calls herself Hedra Carlson (Jennifer Jason Leigh). She is the Single White Female with whom New York working woman Allison Jones (Bridget Fonda) chooses to share her huge rent-controlled West Side apartment.
Director Barbet Schroeder's patronizingly worthy pictures remind me of hell's pavement. The Iranian-born, Paris-educated filmmaker always stresses his good intentions.
Openly, though, he sympathizes with devils. His American-made movies all have painfully split personalities.
Barfly (1987), based on the life of street poet Charles Bukowski, wallowed in both the scrofulous reality and creative romanticism of alcoholism. Reversal of Fortune (1990), Schroeder's adaptation of lawyer Alan Dershowitz's self-serving account of the Claus Von Bulow case, celebrated the best impartial justice money could buy.
The split is built into the plot of Single White Female, screenwriter Don Roos’s  adaptation of John Lutz's 1990 novel, SWF Seeks Same. It introduces us to Allison, a sophisticated, self-employed computer whiz who's breaking up with her faithless fiancé, Sam Rawson (Steven Weber).
Open, kid-sisterly Hedra proves to be a friend in need. Hedy, it turns out, once survived the death of a twin and continues to seek a complementary "other half."
Filmgoers who saw Robert Altman’s less artificial Three Women already know where this is going. The crisis comes when Sam manages a reconciliation with lonely, love-hungry Allie.
To his credit, Schroeder emphasizes the complexity (and emotional culpability) of both women. As played by the fearless, professionally daring Leigh, Hedra is almost touchingly disturbed, tragic rather than evil.
Fonda, in the more conventional role, manages to give Allison an off-putting edge. This lady-in-potential-distress is a bit too self-centred to engage our unreserved concern.
Too bad these powerhouse performers are trapped in a mostly formulaic tale of urban violence.  Cosmas Demetriou's set design is positively gothic in its horror-house obviousness.
And what are we to make of Schroeder's Porky's-like insistence on displaying his leading ladies in the buff? Is there some Hollywood rule that says that a film with no male stars must find some excuse to undress its women?
A psychological thriller, Single White Female offers little more than meets the eye.

Afterword: Let’s be clear. I’m not against nudity on screen. During my years as a working critic I made a number of court appearances offering testimony on “contemporary community standards” in defence of such films as Caligula. In the 50 years since the release of Deep Throat (1972), the movie market has accepted pornography as a genre of considerable financial significance. Thank (or blame) such technologies as video tape, the dvd and the Internet.
What I am against is gratuitous nudity. In my 1981 review of writer-director Blake Edwards’s S.O.B., I went off on a tangent about directors insisting that their actress wives strip on screen, appending a list of examples. At the time, it was hard not to notice that cablecasters such as HBO had shouldered their way into the new pay television market by signalling their “adulthood.” In far too many cases that translated into a lot of dramatically unnecessary female nudity, a sales strategy as tiresome as it was offensive.
Was Jennifer Jason Leigh’s shower stall scene in Single White Female a dramatic necessity or naked exploitation? Given that Bridget Fonda is seen nude in a bathtub, is it possible that director Barbet Schroeder was using hygiene habits to distinguish the characters' personalities? Am I overthinking this?