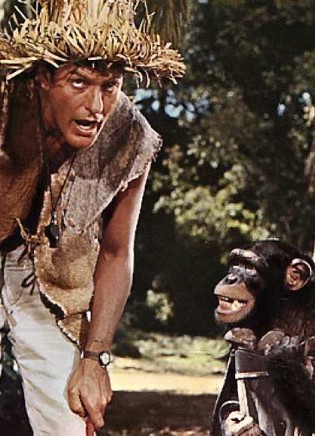 
Castaway comedy in the Disney style


On this day (January 31) in 2010, Canadian-born director James Cameron’s sci-fi epic Avatar became the first film to gross over $US 2 billion worldwide. The tale of the Na’vi, a humanoid species fighting to save their planet from Earth-based exploitation, it set its record on the annual faux celebration known as National Gorilla Suit Day. And, as befits a holiday with cartoon origins, the event’s where bears no relation to its when. We know that the idea sprang from the brain of a Mad Magazine artist who used it as the name of an original 56-page tale of daft mayhem created for the 1963 paperback Don Martin Bounces Back. When the magazine published a wall calendar in 1979, it said NGSD’s date was March 5, but prolific comic arts blogger Mark Evanier later decided it should be January 31, and that entirely arbitrary date is now accepted by ardent ape-suit aficionados everywhere. Theirs is a community that crosses over with the primate-pictures fandom that has been with us since 1933’s King Kong and Tarzan the Ape Man (1932). That, of course, is Reeling Back’s cue to add four more ape-positive features to the archive (with links to each following the Afterword to this posting), a package that includes director Byron Paul’s Disney Studio version of Daniel Defoe’s castaway classic. Dick Van Dyke has the title role, playing opposite a scene-stealing chimp, in the 1966 comedy Lt. Robin Crusoe, U.S.N..

LT. ROBIN CRUSOE, U.S.N. Written by Don DaGradi and Bill Walsh. Music by Robert F. Brunner. Directed by Byron Paul. Running time: 110 minutes. Rated General entertainment. IN 1932, THE FIRST colour cartoon, Flowers and Trees, wore the  familiar Walt Disney imprimatur. A pioneer of screen shading, Disneyland’s benevolent overlord has recently been developing  the art of colorvision. His involvement with the teletube, however, has infected his theatre-sized product.
Lt. Robin Crusoe, U.S.N. is carefully made to survive excessive trimming for broadcast. Indeed, it could neatly fit into the time slot of a television showing as, in fact, we know it eventually will.
Either way, the kids will love it. To the basic Daniel Defoe castaway tale has been added a shiny coating of glazed sugar. Though the essential Disney style, calling for easy acting, glib dialogue and plenty of special effects has been reduced to living-room proportions, it remains child-approved as entertainment.
Dick Van Dyke is cast as the comic Crusoe, a combination of all-American stumblebum and ingenious eagle scout. In the context of a children's movie, he creates a drunk scene that may well stand as a classic.
It is as fully delightful as the flubber car chase — the special effects tour de force from The Absent-Minded Professor — and it is the one scene in which he is not upstaged by his most effective co-star, an uncredited astro-chimp.
Less impressive is Nancy Kwan, an oriental Ann-Margret  who looks as if she would be far more comfortable in a sex-and-surf opus opposite spankie-Frankie Avalon.
Roughing it on an atoll more hospitably landscaped than Toronto’s Centre Island, Van Dyke mugs gamely against the scene-stealing ape, and even manages to teach female suffrage to a gang of nasty natives. Though the ape might someday forgive him, the natives never will.
But why quibble over Disney's TV intentions? The Old Master hasn't lost the touch.

Afterword: The gorilla-suit connection comes from the fact that castaway naval pilot Crusoe’s first companion on his Pacific island is a lost member of NASA’s space program, an astrochimp named Floyd. In the above review, I noted that the animal actor’s name did not appear in the movie’s credits. Forty-four years later, in a New Yorker interview, Dick Van Dyke recalled his work on the film, and co-starring with a chimp named Dinky. And that’s why his name comes to be in the credits listed at the top of this page.
Posting a review written during my college days is a moderately painful experience. On one hand, I can’t help but wince at a writing style trying so hard to sound magisterial and coming off as, well, undergraduate. (What possessed me to use a phrase like “spankie-Frankie?”) On the other, I can see ideas taking shape that I’m not at all ashamed of. Here I am struggling to take a Disney Studios picture seriously at a time when “real” critics were generally dismissive of them. It was two years before Time magazine film critic Richard Schickel published his groundbreaking The Disney Version: The Life, Times, Art and Commerce of Walt Disney, a book that reinforced my feeling that there was much bubbling beneath the surface of “child-approved” entertainment. Finally, do I see the ultimate emergence of a union shop steward in my younger self’s concern for Dinky the chimp not getting a screen credit?