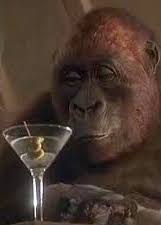 Parody of the apes


More fun than another dinosaur hunt


On this day (January 31) in 2010, Canadian-born director James Cameron’s sci-fi epic Avatar became the first film to gross over $US 2 billion worldwide. The tale of the Na’vi, a humanoid species fighting to save their planet from Earth-based exploitation, it set its record on the annual faux celebration known as National Gorilla Suit Day. And, as befits a holiday with cartoon origins, the event’s where bears no relation to its when. We know that the idea sprang from the brain of a Mad Magazine artist who used it as the name of an original 56-page tale of daft mayhem created for the 1963 paperback Don Martin Bounces Back. When the magazine published a wall calendar in 1979, it said NGSD’s date was March 5, but prolific comic arts blogger Mark Evanier later decided it should be January 31, and that entirely arbitrary date is now accepted by ardent ape-suit aficionados everywhere. Theirs is a community that crosses over with the primate-pictures fandom that has been with us since 1933’s King Kong and Tarzan the Ape Man (1932). That, of course, is Reeling Back’s cue to add four more ape-positive features to the archive (with links to each following the Afterword to this posting), a package that includes director Frank Marshall’s information-age version of King Solomon’s Mines. Laura Linney stars in his quirky 1995 adventure fantasy Congo.

CONGO. Written by John Patrick Shanley. Based on the 1980 novel by Michael Crichton. Music by Jerry Goldsmith. Directed by Frank Marshall. Running time: 109 minutes. Rated 14 Years Limited Admission with the B.C. Classifier’s warning "some violence and very coarse language." LIGHTEN UP, GUYS.
Steven Spielberg's good buddy Frank Marshall busted a gut to deliver the kind of off-the-wall, summer screen entertainment that you all say you like, and all you can do is bitch, bitch, bitch.
Compared to what's already out there, Congo is a trip.
No kidding. Though it's being marketed with the deadly seriousness of an Apocalypse Now, Marshall's picture is actually a cheeky, high-adventure cartoon loaded with supremely silly stuff for a traditionally silly season.
Too bad reviewers who had an early peek didn’t get it. Pre-release notices were damning enough to spook the publicist mice at Paramount who, having organized special screenings two weeks ago for the always effusive U.S. radio and television “critics,” timed Congo’s local preview to avoid day-of-opening reviews in the Pacific Press [Vancouver] newspapers.
Admittedly, Marshall is a director whose demonstrated skills run more to administration than creative innovation. He's best known as Steven Spielberg's Amblin Entertainment partner, and the producer of all of his megahit fantasies since Raiders of the Lost Ark.
Though Marshall's two previous directorial efforts — 1990’s Arachnophobia and the filmed-in-B.C. feature Alive (1993) — lacked panache, they were the work of a man willing to take chances. With Congo, he's bet the farm on a genuine wild man, playwright John Patrick Shanley.
Though its source material is novelist Michael Crichton's information-age version of King Solomon's Mines, Shanley's screenplay represents a worldview that is several degrees off plumb. It's also blessedly free of the self-important message-mongering that galloped through Spielberg’s 1993 Jurassic Park.
Shanley, who wrote and directed the underappreciated satirical romance Joe Versus the Volcano, speaks to the generation raised on comic irony and Hollywood delusions. A dealer in archly rendered archetypes, he tells us everything we need to know about its plot in the film's first scene.
Establishing a satellite link from the side of Zaire's volcanic Mt. Mukenko, diamond hunter Charles Travis (Bruce Campbell) reports to the Houston headquarters of the TraviCom Corporation. The ground is already shaking beneath his feet.
A few minutes later, he discovers a lost city in the jungle and falls prey to its sinister, non-human guardians. There's absolutely no doubt where this picture's headed, or what's going to happen in the final scene.
Ten years ago [1985], when Richard Chamberlain and an irresistibly spunky, still-unknown Sharon Stone starred in a broadly comic remake of King Solomon's Mines, filmmakers were trying to duplicate the success of the Indiana Jones pictures. Today, Jurassic Park (also based on a Crichton novel) is the obvious comparison.
It's just not the right one. Shanley, with less interest in special effects than in current events, is playing Last Action Hero games. Congo is his politically-correct take on high-adventure traditions.
His take-charge hero is ex-CIA asset Karen Ross (Laura Linney). She uses TraviCom dollars to buy her way 0nto an expedition organized by sensitive academic Peter Elliot (Dylan Walsh), a primatologist returning a homesick mountain gorilla named Amy (Misty Rosas, Lola Noh; voice of Shayna Fox) to the wild.
In Africa, their safari leader is Monroe Kelly (Ernie Hudson), a bluff, self-proclaimed "great white hunter" who glories in the fact that he is black. Along for the trip with his own agenda is Herkemer Homolka (Tim Curry), a Romanian philanthropist.
"Free now of the chains of Ceausescu, I travel the world doing good," he proclaims expansively. If actress Linney is a treat in her no-nonsense role (and she is), Curry is thoroughly delicious delivering lines like "the myth of the killer apes is true! "
Viewed as a parody adventure (and it is), Congo is more fun than a dinosaur hunt.

Afterword: The career of Frank Wilton Marshall is a book waiting to be written. Its emphasis naturally would be on the California-born film executive’s half-century as a producer, along with his association with game-changing directors such as Peter Bogdanovich, Walter Hill, Robert Zemeckis and, of course, Steven Spielberg, a relationship that began with 1981’s Raiders of the Lost Ark and continues to this day. (Scheduled for release in 2022 are a fifth Indiana Jones adventure with Harrison Ford, and Jurassic World: Domination, the sixth in that series.)
Congo was one of just five features that Marshall directed. Localist that I am, I can’t help pointing out that he chose to film two of those pictures in British Columbia. The first was the 1993 survival drama Alive. Based on the true story of the Uruguayan rugby team that struggled to stay alive after their plane crashed in the Andes, it was shot in B.C.s southeastern Purcell Mountains. Thirteen years later, again in search of snow, he went on location in northwestern B.C. to shoot Eight Below. Another survival tale, this one is set in Antarctica and focuses on a dog team — two malamutes and six huskies — abandoned during a storm. A subject worthy of further study is director Marshall’s apparent fascination with extreme environments and the critters that people meet there.