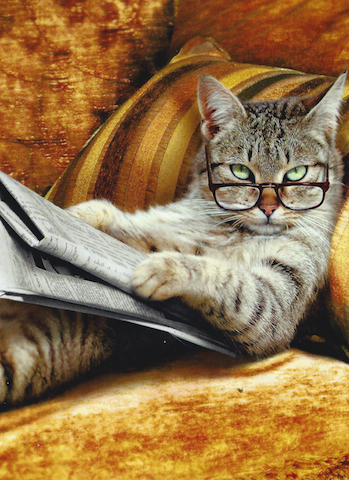 It takes a certain feline distance to bring needed perspective to the great issues of the day.
THE WHOLE STORY — To see a complete list of the 1,073 items currently posted to Reeling Back, visit the FULL SITE INDEX. To locate specific names or subjects, type your key word(s) into the Search box (located in the right-hand corner of the nameplate above), and click on the magnifying glass (search) symbol. The archive grows with some regularity, so feel free to explore.


Not just a new year, but a new decade begins today (January 1, 2020). The very thought of it — the challenges, the opportunities, the responsibility — is enough to induce creative paralysis. Or, perhaps, to invoke the title of Nikolay Chernyshevsky’s 1863 novel What Is to Be Done?.

Another New Year’s Day, another ringing declaration of purpose.

With a fifth of the twenty-first century already behind us, I probably should be setting down my sage analysis of what is to come, and what must be done. Though hardly a household name today, Russian writer (and critic) Nikolay Chernyshevsky lived though revolutionary times, and his thinking influenced a subsequent generation of social disruptors. Vladimir Ilyich Ulyanov (aka Lenin) borrowed the title of his 1863 novel What Is to Be Done? for the more famous 1902 pamphlet that set out the agenda for the twentieth century Russian revolution.

Take it down a notch, says the cat. The bespectacled tom lounging at the top of this page is not impressed. I met him late last year, the face on the greeting card my wife gave me to mark our 51st wedding anniversary, and his fine feline scepticism reminds me that life remains both a mystery and an adventure.

A recent example that maintains our Russian theme is my discovery of Mikhail Bulgakov’s The Master and Margarita, a novel written in the 1930s but not published until the mid-1960s. An Australian friend of my daughter insisted that I read it. And so I did, delighting in a political satire set in a fantasy world in which the devil pays a visit to the Soviet Union. Among his companions is a talking cat.

There always is another way to see the world. Earlier this week, I finished reading Shawna Kidman’s 2019 Comic Books Incorporated: How the Business of Comics Became the Business of Hollywood. A pop-culture historian and professor of communication studies at the University of California, San Diego, Kidman brings up to date a story that has fascinated me since my own days in college. (I wrote about the comics biz in 1966 and then again in 1967.)

Her approach challenges the conventional wisdom about comic books within the entertainment business mix by placing its focus on the “invisible” media infrastructure. Her achievement is to support her alternative take on the history, with convincing research that spans some 80 years. Kidman’s book was an unexpected pleasure, in part because it explored many of the ideas I’ve thought important but not seen in print before.

So, instead of a list of resolutions, I think I’ll just keep on keeping on. The New Year will certainly contain its share of predictable disappointments, as every year does. What we don’t know is when the gloom will yield to the sudden delight of a new idea, experience or acquaintance, only that it will.

The year’s end was chock full of diversions and distractions, with the result that there were but three postings to Reeling Back during December. These included:

1941 — Director Steven Spielberg saw out a different decade with this Christmas 1979 mega-comedy. An over-the-top look at the immediate aftermath of the U.S. declaration of war on the Imperial Japanese Empire, it brought together almost every clown in Hollywood. (December 13).

BATTLE IN SEATTLE — Social historians who remember the public protests at the 1997 APEC summit in Vancouver found it ironic that writer-director Stuart Townsend chose to film his documentary-like tale of the 1999 action opposing the WTO’s free-trade agenda, not on the streets of the Emerald City, but in Vancouver. (December 3)