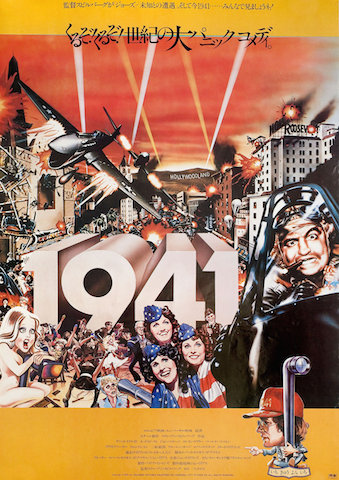 Director Steven Spielberg appears to be pointing to the name of Japanese superstar Toshiro Mifune in the lower right corner of the Japanese release poster for his 1979 war-nerves comedy, 1941.

Enter a state of madness


Chaos has to be seen to be believed


On this day (December 13) in 1941 the U.S. had been at war for less than a week and Californians, fearing a Pearl Harbor-like attack on their coast, panicked. That moment inspired director Steven Spielberg to create his 1979 super epic, an over-the-top megacomedy he called 1941.

Afterword: Steven Spielberg’s fourth theatrical feature, 1941 was a classic curate’s egg: a cinematic failure that I considered a must-see movie for the parts of it that were very good. Coming after the director’s 1977 blockbuster Close Encounters of the Third Kind, it was an epic demonstration of what Hollywood’s special effects technicians could do circa 1979. Looking back on my review, I’m reminded of how the talents of traditional matte artists, model makers and animators made the picture’s visual excesses possible. The words “computer-generated imagery” had not yet entered our vocabulary for the simple reason that CGI technology was still in its infancy.
It turns out that Michael Crichton, not Spielberg, was the first feature filmmaker to dip into the new electronic toolbox. His 1973 picture Westworld pioneered the use of 2D computer animation to show us how things looked from the point of view of the theme park’s renegade robot gunslinger. Four years later, George Lucas would include some 3D wire-frame graphics in Star Wars, though the effects were limited to displays of computer imagery. It wasn’t taken to the next level until 1981, when Michael Crichton introduced audiences to Cindy, the first CGI human character, in his thriller Looker.
Recognized as the coming thing, CGI underwent considerable development in the 1980s and 1990s. James Cameron’s 1991 Terminator 2: Judgment Day was the first to offer realistic human movement by a CGI character. In 1995, John Lasseter’s Toy Story entered the record books as the first feature-length CGI animated movie. Today, we take it for granted that anything that an artist can conceive can be given visual existence on his or her computer. In her 2019 social history Comic Books Incorporated, communications scholar Shawna Kidman poses the question “why comic book movies, and why now?” Among the major reasons, she cites “the rise of CGI technology.” For the moment, it seems, audiences are living on a diet of curate’s eggs.