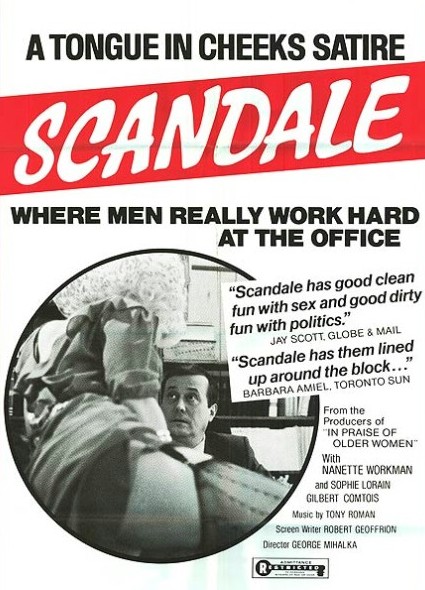 
On Her Majesty’s sexual service

SCANDALE. Written by Robert Geoffrion. Music by Tony Roman. Directed by George Mihalka. Running time: 90 minutes (original running time: 96 minutes). Restricted entertainment with the B.C. Classifier’s warning: frequent nudity and sex. THE STORY MIGHT HAVE been a hymn to the spirit of individual initiative. According to the newspapers, an enterprising group of Québec civil servants supplemented their incomes by working after hours, making movies in the provincial government’s videotape studio.
Their harmless hobby became political dynamite when it was alleged that the performances so recorded were more athletic than dramatic. The resulting scandal came to be called “PornoBéc.”
Let’s give credit where credit is due. The Québécois have a fine sense of style.
More interesting than some dumb expense-account scam, PornoBéc made headlines for months. About the time that the press was done with it — nothing was ever proven — a cheeky little comedy was released to movie houses in La Belle Province.
Scandale, as it turns out, is the real example of free enterprise. Shot in two weeks for under $500,000, the picture is a fast, funny sexploiter designed to catch the mood of the moment, and net a few boxoffice dollars in the process.
The bumbling villain of the piece is Robert Rousseau (Gilbert Comptois), the unctuous deputy minister in the Ministry of Culture. To help himself up the administrative ladder, he’s busy cutting costs, the better to show his fiscal responsibility in recessionary times.
Caught in the squeeze, his Québec City staff decide to use the materials at hand to make ends meet. Under the direction of the luscious Lucille (Sophie Lorain), Rousseau’s executive secretary, they head for the video studio determined to “do like all the other filmmakers in this country. We’ll shoot, script or no script.”
Enthusiasm notwithstanding, their first efforts lack the professional touch. When Lucille gets the giggles, well, poor old Yves (Denis Larocque) just can’t perform.
What’s needed is further research. It’s off to “the biggest sin city in North America.”
“You mean Ottawa?” says Lucille, wide-eyed.
No, silly, it’s Montréal, where director George Mihalka’s cameras can shoot some bright lights and record popstar Nanette Workman’s club act. (Her number, Call Girl, is one of the nominees for this year’s best song Genie Award.)
While his staff is assembling the great Canadian movie, Rousseau must attend to his other problems. One is his minister, a somewhat vague politician named Gossellin (Robert Desroches) who is playing host to a French cultural envoy sent out to select features for the Cannes Film Festival.
It seems that the Québec government has invested about $1 million in a movie being made by a local artiste, Gilbert Poitras (Jean-Guy Moreau). We must make sure that the right film is chosen, mustn’t we?
Rousseau’s main problem is secretarial help. All he wants is a little understanding, and he goes through about five girls a month searching for one who would rather be nice than be fired.
Despite a well-developed satirical sense, Mihalka’s film never loses sight of the fact that it is a sex-exploitation movie. The comedy frequently stops dead so that filmgoers can watch the elements of the film-within-the-film coming together, a selection of scenes involving some attractive, if nameless, Canadian players.
Even so, Robert Geoffrion’s script has the good manners to tie all the various plot strands together at the end. A zesty bit of domestic ephemera, Scandale leaves us with the feeling that somewhere in this country there are still people who know how to make movies for fun.
*    *    *
SCANDALE WAS SEEN HERE earlier this year during the Academy of Canadian Cinema’s membership screenings. Shown, at that time, was the French-language version seen in Québec theatres.
On view currently is the English-dubbed release print prepared by the producers for the rest of Canada. So as not to unduly upset Ontario’s censor board, the distributor removed all of the explicit (hardcore) sex footage, and one less-than-wholesome punk rock club act.

Afterword: Film publicists everywhere love a movie that they can sell with the line “based on a true story,” “torn from today’s headlines” or “inspired by real events.” Scandale was released on May 7, 1982, less than six months after the word  “PornoBéc” first appeared in print. Filmed in just 22 days in January 1982, it opened in 21 theatres in Québec, a major release for a picture rushed into production on a shoestring budget of $450,000. It differed from most other reality-based movies in being a satirical comedy and, of course, sexually explicit.
As I noted in my review, the subsequent investigation into the PornoBéc allegations cleared the accused civil servants of the headline charges. Although the workers had viewed and even duplicated existing porn movies with the government’s equipment, they hadn't shot any new hardcore footage. Nevertheless, it remained an issue, and contributed to the defeat of the Parti Québécois in the 1985 general election. As to the Genie Awards, 1983 was the year of British Columbia’s The Grey Fox, the winner in seven categories, including best picture. Scandale, nominated in the best song category for Nanette Workman’s Call Girl, lost to Burton Cummings’s saccharine ballad You Saved My Soul, written for the backwoods melodrama Melanie.

See also: “True” stories brought to the screen by Canadian filmmakers currently included in the Reeling Back archive are: Alien Thunder (1974), the made-in-Saskatchewan tale of an epic 1885 Mounted Police manhunt; Death Hunt (1981), a made-in-Alberta feature that really stretches the truth about a 1931 Mounted Police manhunt; The Grey Fox (1982), the much-honoured B.C. picture based on the late career of gentleman train robber Bill Miner; The Legend of Kootenai Brown (1991), also made in B.C., recalls characters from the 19th century Cariboo gold rush; Recommendation for Mercy (1975) is based on the 1959 murder trial of the teenaged Steven Trucott in Ontario, and Samuel Lount (1985) recreates the 1837 rebellion by the aggrieved citizens of Upper Canada.