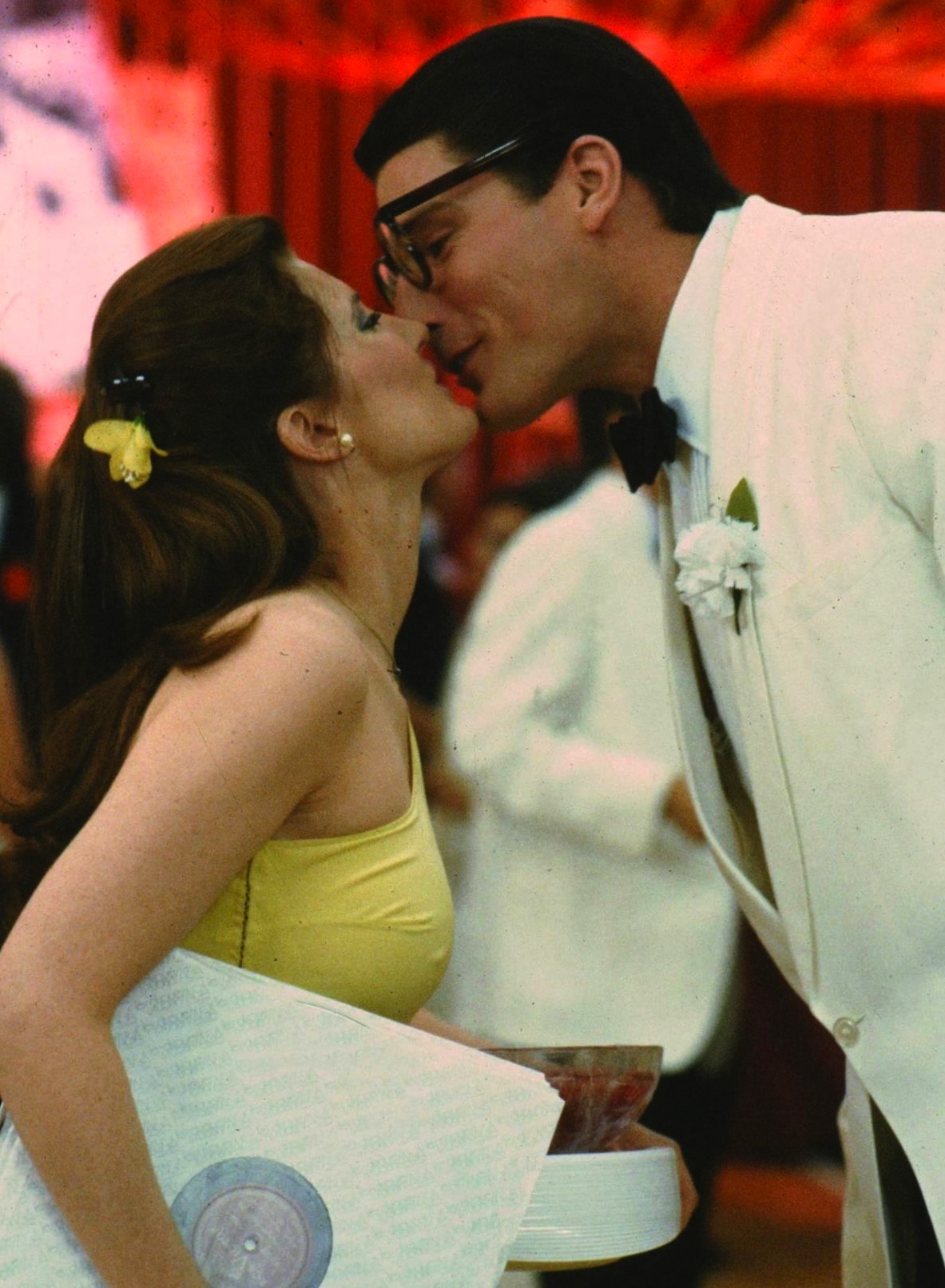 Superhero in a slump


On this day (January 16) in 1939, nine months after his debut in Action Comics #1, mild-mannered reporter Clark Kent first appeared as the hero of a newspaper comic strip. Five years after his feature film debut, Kent returned to Smallville for a high school reunion in 1983's Superman III.

Friday, June 17, 1983.
SUPERMAN III. Written by David and Leslie Newman. Based on characters created by Joe Shuster and Jerry Siegel. Music by Ken Thorne and John Williams. Directed by Richard Lester. Running time: 123 minutes. General entertainment with the B.C. Classifier's warning: occasional swearing. THE MAN OF STEEL is in a slump. There he sits, surly and unshaven, in a bar belting back Scotch. He's looking dirty, and he's looking mean.
When he finally staggers into the street, a little boy looks up at his hero in disbelief. It's the classic "say it isn't so" scene. Unable to meet the child's distraught stare, Superman lurches off down the street.
A talented director is in a slump. Richard Lester, a film-maker who is capable of brilliance but who can also be a proper pain, is having trouble getting it all together.
His latest feature lurches between beautiful moments and overall ineptitude. In a word, his Superman III is a mess.
Coming out of the theatre, I felt just like little Ricky (Paul Kaethler), the boy on that Metropolis street. When he's on, Lester is a genius. Two of his creations — 1973's The Three Musketeers and 1976's Robin and Marian  — are  among my all-time favourite films.
When he's off — say it isn't so, Dick! — Lester turns out pictures like How I Won the War (1967), Royal Flash (1975), and Superman III. The need for coherence and consistency gives way to the immediate effect, and there is no whole to be derived from the sum of the various parts.
Little Ricky feels betrayed because he knows what Superman can be. What I can't forget is the first Superman feature, an exceptionally fine film made under the direction of Richard Donner.
A 1978 release, it really was a super movie. A perfect marriage of film magic, modern mythology and just plain fun, it was obviously made by a man with both understanding and respect for the material with which he was working.
In Donner's film, the ground rules are established early. The first spoken line of dialogue is Marlon Brando's sonorous assertion that "this is no fantasy."
Donner played it straight. He set out to make us "believe a man can fly," and allows his film's considerable wit to proceed from the characters, rather than from incidental situational contrivance.
Donner was daring almost to the point of blasphemy. The result was a marvellously memorable movie.
Here, it seems, all Lester wants is to be a clown. Superman III opens with a close-up of comic actor Richard Pryor activating his inventory of facial tics. As Gus Gorman, Pryor works yet another variation on his overly-familiar hysterical retard schtick.
His character, inspired by a matchbook cover advertisement and the termination of his unemployment benefits, takes a computer programming course. Gus turns out to have a natural talent and this, as they used to say in the days of radio, will bring about new adventures for the Man of Steel.
After introducing Pryor, Lester rolls his film's credits over a laugh-loaded slapstick street scene. Incidents of interlocking visual mayhem build up to the moment that mild-mannered Daily Planet reporter Clark Kent (Christopher Reeve) accidentally tosses a pie into the face of a passer-by, the exact moment, of course, that "Directed by Richard Lester" appears on the screen.
This is a picture that should have been named  A Funny Thing Happened on the Way to the Plot.  In it, Lester ignores all previously established conventions, and shows considerable contempt for both the characters and his audience.
As far as he's concerned, a "comic book" is something that has to have lots of laughs. His screenplay, penned by the husband and wife team of David and Leslie Newman, hardly ever misses an opportunity for a cheap shot.
The core plot has Gus going to work for a colourless corporate villain named Ross Webster (Robert Vaughn). To eliminate "good guy" Superman, Webster has Gus whip up some ersatz Kryptonite that has the effect of liberating our hero's dark side.
A sidebar plot involves Clark Kent's return to Smallville, Kansas, (played by High River, Alberta) for his high school reunion. There he discovers that his former classmate (and secret heartthrob) Lana Lang (Annette 0'Toole) is now a single mother.
The two experience what looks like the beginning of a beautiful relationship. The nice thing is that, unlike Lois Lane (Margot Kidder), who is hung up on Superman, lovely, simple Lana likes Clark for himself.
Lester, unfortunately, chooses not to explore this potentially involving bit of character development.
His lack of interest in such fundamental storytelling is matched only by his utter indifference to the quality of the picture's special effects work. His feature is as big a mess technically as it is dramatically.
A few bright lines, and the occasionally delightful moment notwithstanding, Superman III isn't even a good comedy. This time around, the package contains a lot of shockingly shoddy goods.

Afterword: Canadian Sidney J. Furie directed Christopher Reeve's final flight in the Clark Kent role. Superman IV: The Quest for Peace (1987) generated poor box-office results and critical brickbats. Thereafter, at least five attempts to reboot the franchise were announced, and then abandoned. Finally, in 2006, Warner Bros. produced Superman Returns, a feature directed by Brian Singer, whose previous credits included the comic-book movies X-Men (2000), and the filmed-in-Vancouver X2  (2003). When the new film failed to perform to the studio's expectations, plans for its announced sequel were shelved, along with actor Brandon Routh's hopes for major stardom. In 2013, Warners tried again, releasing director Zack Snyder's Man of Steel, with British-born Henry Cavill in the title role. Filmed in Chicago and Vancouver, the  picture did well enough for the studio to announce that Snyder would direct a sequel, currently titled Superman v Batman: Dawn of Justice, scheduled to premiere in late March, 2016.
A television actress from the age of 14, Texas-born Annette O'Toole never really broke through as a feature film star. She didn't lack talent. A year after Sissy Spacek won an Oscar for her performance as Loretta Lynn (in 1980's Coal Miner's Daughter), O'Toole demonstrated her own singing ability, playing Tammy Wynette in the made-for-TV feature Stand by Your Man. (Earlier, she was actress Leslie Ackerman's singing voice, dubbing the song sung by the character Susie in 1976's The First Nudie Musical.) Like Spacek, O'Toole has an Oscar. Her win came in 2004, honouring her as the composer of "A Kiss at the End of the Rainbow," the year's Best Song. Sung on screen by Eugene Levy and Catherine O'Hara, it was one of three songs O'Toole contributed to the musical mockumentery A Mighty Wind. In 2001, she reconnected with the Teen of Steel, playing Clark Kent's mother Martha for the entire ten seasons of Smallville. From 2001 to 2011, Cloverdale, B.C. played the rural townsite, while Vancouver substituted for Metropolis.

See also: The Man of Steel's first flight as a feature film star was in Richard Donner's Superman, the Movie (1978); followed in 1981 by Richard Lester's Superman II.