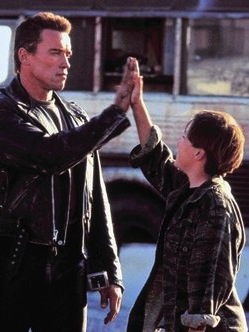 Taking back the future


Today (August 29) in 1949 was one of those days on which the world changed forever. It happened at a place called Semipalatinsk in north-east Kazakhstan, where the earth shook as the Soviet Union detonated its first atomic bomb. The test, code-named First Lightning, put an end to the nuclear monopoly the United States had enjoyed since July 16, 1945. It was less than a month after that first test in the New Mexico desert that the U.S. demonstrated the power of its new weapon by incinerating the Japanese cities of Hiroshima (August 6) and Nagasaki (August 9). Four years later, editorial writers introduced the term "arms race" to their readers. Not to be left behind, former "Great Powers" Britain and France set out to develop their own nuclear arsenals, with the U.K. joining the club in 1952 and France in 1960. When China tested its own bomb in 1964, satirist Tom Lehrer noted that "proliferation" had become "the word of the day" and responded with a song called Who's Next?. India, as it turned out, made use of its Canadian-supplied CIRUS reactor to build the bomb it set off in 1974, which prompted its neighbour Pakistan to go nuclear in the mid-1980s. North Korea made much of its October 2006 A-bomb test. By contrast, Israel keeps very quiet about its nukes, a stockpile that's been growing since the late 1960s. In the alternate universe envisioned by director James Cameron, today (August 29) is the day in 1997 that the machines rose up against us, an event at the centre of his Terminator 2: Judgment Day (1991).

Wednesday, July 3, 1991
TERMINATOR 2: JUDGMENT DAY. Co-written by William Wisher. Based on characters created by James Cameron and Gale Anne Hurd. Music by Brad Fiedel. Co-written and directed by James Cameron. Running time: 136 minutes. Restricted with the B.C. Classifier's warning: frequent violence, some very coarse language. YOU CAN'T BLAME the kid for being wild.
For one thing, 10-year-old John Connor (Edward Furlong) never knew his father. For another, his mom's a nut.
"She's a complete psycho," John says. Currently, she is resident in one of the state's better mental institutions.
According to Sarah Connor (Linda Hamilton), her son is the result of a one-night stand with a man sent from the future to protect her from a cybernetic assassin programmed to kill her.
She claims that on Aug. 29, 1997 — Judgment Day — machines will declare war on mankind, killing about three billion people outright in a thermonuclear holocaust. Dr. Silberman (Earl Boen), her shrink, calls her condition "acute schizophrenic depression."
Her son, currently living with foster parents, says "she's a total loser."
A Spielberg for the 1990s, Ontario-born James Cameron is the creator, co-writer, producer and director of Terminator 2: Judgment Day, likely to be one of the summer's biggest box-office winners.
And deservedly so. A super sequel, this follow-up to Cameron's own 1984 hit movie takes us back to the future with action-epic intensity, expanding, improving upon and completing the original with unfailing craft and intelligence.
The Terminator was a surprise. A low-budget special-effects show, it starred bulked-up superstar Arnold Schwarzenegger as a robot murderer sent from the year 2029 to kill a 19-year-old Los Angeles waitress.
An unpretentious programmer, it featured sharp plotting, spot-on performances, first-rate fantasy effects and unexpected comedy, all together in a perfectly paced package.
Terminator identified Cameron and his production partner Gale Anne Hurd as serious contenders. As husband and wife, they collaborated on Aliens, a sequel every bit the equal of Ridley Scott's original Alien (1979).
Despite the collapse of their marriage, they remained production partners to complete The Abyss (1989), a spectacular, Spielbergian underwater fantasy.
Terminator 2 reunites actors Hamilton and Schwarzenegger with the Cameron-Hurd team. It begins by expanding upon its own version of future history. "Judgment Day" occurs right after the U.S. deploys an SDI-like "defence" system called Skynet.
The computer in control of all American weaponry, Skynet becomes self-aware and launches a first strike against humanity. Fortunately, "the future is not set."
From the ashes of the 21st century, Connor sends his mother the message that "there is no fate but what we make for ourselves."
Having failed to eliminate the mother of its enemy back in 1984, Skynet sends a new, improved T-1000 terminator (Robert Patrick) to kill him as a child in 1994. Anticipating the computer's move, the adult Connor sends a reprogrammed T-800 (Schwarzenegger) to protect his own younger self.
Together with screenwriter William Wisher, Cameron tells the story of a kid who learns about self-control, self-sacrifice and the fact that often a boy's best friend really is his mother.
Kinder and gentler in intent, this Terminator is even more action-packed and entertaining.

Afterword: And then it became a franchise. Though I don't for a moment begrudge the James Cameron-Gale Anne Hurd team their deserved fame (and fortune) for the creation of The Terminator, I'm no fan of the corporate franchises that so often result from such success. (Is the world truly a better place as a result of the the multimedia Saw franchise?) Subsequent efforts to continue the Terminator tale offered up a mixed bag. In 2003, Jonathan Mostow directed the committee-written Terminator 3: Rise of the Machines, a mildly entertaining mess distinguished by its introduction of T-X, a female Terminator, played by the 180 cm (5'11") Kristanna Loken. By contrast, the two-season Terminator: The Sarah Connor Chronicles (2008-2009) television series was brilliant. Created by Josh Friedman, the show followed the fortunes of teenaged John Connor (Thomas Dekker) and his mom (Lena Headey) immediately after the events of Terminator 2: Judgment Day. A major part of the show's success was its female Terminator, called Cameron (played by Joss Whedon alumna Summer Glau), sent from the future to protect John Connor. When the Fox network declined to renew the show for a third season, we were left with the worst of all worlds, director McG's overblown, truly awful 2009 feature Terminator Salvation. Earlier this year (2015), director Alan Taylor attempted to "reboot" the franchise with Terminator Genisys (sic). It starred former California governor Arnold Schwarzenegger, returning to the series as Guardian, a T-800 reprogrammed to protect Sarah Connor. Despite the presence of Canadian actress Sandrine Holt in a minor role, the picture tanked at the box office and put on hold Paramount Pictures' plans for a new feature-film trilogy.

See also: My thanks to BJA for sending me a link to Isao Hashimoto's YouTube video A Time Lapse  Map of Every Nuclear Explosion, an animated history of atomic testing from 1945 to 1998.