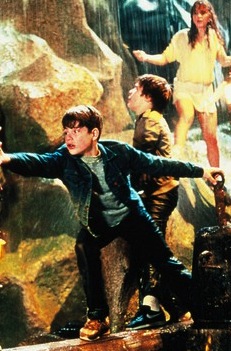 This time it's personal


An amusement park ride on celluloid


Born on this day (February 25) in 1971, Sean Astin is best known for playing steadfast Samwise Gamgee in The Lord of the Rings trilogy. For me, though, his most compelling role was that of Michael Walsh, the star of director Richard Donner's 1985 teen comedy, The Goonies.

Tuesday, June 11, 1985.
THE GOONIES. Written by Chris Columbus, based on a story by Steven Spielberg. Music by Dave Grusin. Co-produced and directed by Richard Donner. Running time: 112 minutes. Mature entertainment with the B.C. Classifier's warning: may frighten very young children; some coarse language. WHAT WAS IT MICHAEL BARTLETT said about theme park management?  "You get 'em on the site, you feed 'em, you make 'em  dizzy and you scare the shit out of them."
Now that he has some time on his hands, the former Expo 86 president should take his own two children to see The Goonies, a movie that simulates a trip to a Bartlett-style fair.
Getting them on the site is no problem. After such mega-hits as 1982's E.T.