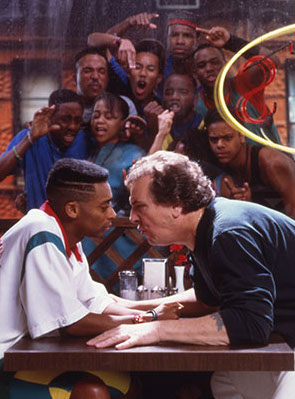 Time to fight the power


Getting past our irrational attitudes


Art can make a difference. American attitudes toward slavery, shaped by the publication on this day (March 20) of Harriet Beecher Stowe’s 1852 novel Uncle Tom’s Cabin, led to the founding on this day in 1854) of a Republican party that opposed the "peculiar institution's" spread into the western territories. When the first Republican president, Abraham Lincoln, met Stowe in 1862, he is said to have called her “the little lady who made this big (U.S. civil) war.” Artists can make a difference. Keenly aware of his nation’s racist history, independent movie-maker Spike Lee named his production company Forty Acres and a Mule Filmworks, an ironic echo of a Reconstruction era land-redistribution policy that ended in the aftermath of the Lincoln assassination. Its corporate logo includes black activist Malcolm X’s phrase “By Any Means Necessary,” to underscore Lee’s dedication to the ongoing struggle for equality. Born on this day in 1957, he uses the film medium to tell the truth as he sees it. Nor does he mince words in his criticism of today’s white-supremacist Republican party. Musing on the January 6, 2021 attack on the U.S. Capitol, Lee says Donald Trump “will go down in history with the likes of Hitler.” Today, we’ll add four uncompromisingly direct Spike Lee titles to the Reeling Back archive (with links to each following the Afterword to this posting). Our package includes his still-relevant examination of effects of racism on American society, 1989’s Do the Right Thing.

DO THE RIGHT THING. Music by Bill Lee. Written, produced and directed by Spike Lee. Running time: 120 minutes. Rated 14 Years Limited Admission with the B.C. Classifier’s warning "frequent very coarse language, occasional violence and nudity."
Oh, the white folks hate the black folks,
And the black folks hate the white folks.
To hate all but the right folks,
Is an old established rule.

TOM LEHRER UNDERSTOOD THE game. In his 1965 song, "National Brotherhood Week," the musical satirist suggested that racial, religious and class animosities were "as American as apple pie."
The game is much the same today, says filmmaker Spike Lee. In his tragi-comic Do the Right Thing, frustration and anger underscore the street humour.
In modern Bedford-Stuyvesant, racial tensions remain as American as pizza pie. Down the block, nerdy Buggin Out (Giancarlo Esposito) is trying to organize a boycott of Sal's Famous Pizzeria.
This morning, the bespectacled activist noticed the absence of “brothers” on Sal’s “Wall of Fame,” a picture gallery made up of Italian-American celebrities. The would-be rabble-rouser has been bouncing around the neighbourhood all afternoon attempting to generate outrage.
He’s not having much luck. “Helter Swelter” reads a News headline, predicting temperatures in the 37℃ [98℉] range.
Hardly anyone wants to work up a sweat over Sal's, a fixture on the corner of Stuyvesant Street for at least 20 years. "They grew up on my food," says pizza baker Sal (Danny Aiello) of the local kids.
While Buggin Out is being silly up and down the block, writer-director Lee introduces us to his America. "One of the biggest lies going is that no matter what race, creed or religion you are, it doesn't matter: we're all Americans.
"That's a lie," says Lee. "Always has been."
A black Brooklynite, Lee is an outspoken social realist. His 1986 debut feature, She's Gotta Have It, used the story of a free-loving young woman to expose the sexual anxieties of black males.
Equally iconoclastic was his 1988 musical comedy School Daze. Set in an all-back college, it suggested that colour discrimination exists within the black community.
With Do the Right Thing, Lee looks at life in the big city. In a fantasy sequence that recalls Hair's “Colored Spade” number, he has five of his characters look directly into the camera and spew out their racial feelings in angry, epithet-filled monologues.
A black worker blasts Italian-Americans. A white excoriates blacks. Then a Puerto Rican speaks ill of Asian immigrants, a white city cop blisters Hispanics and a Korean greengrocer delivers an anti-Semitic tirade.
The speeches play like stand-up comedy routines. After all, these are attitudes that rational people seldom express in public.
Meanwhile, Buggin Out is finding support among the irrationals. Sullen Radio Raheem (Bill Nunn) is a hulking extension of his huge ghetto blaster, a cassette player pounding out endless choruses of Public Enemy's “Fight the Power.”
Less dangerous looking is Smiley (Roger Guenveur Smith), a stammering simpleton who presses hand-coloured photos of Malcom X and Martin Luther King upon passersby. The street's les miserables, these wretched of the American earth hardly seem to matter at all.
They matter, Lee insists. In the course of the day, black folks and white folks alike will be challenged to "do the right thing."
A funny, daring portrait of a troubled society, his film challenges filmgoers to figure out whose "right thing" makes the most sense for urban America.

Afterword: Spike Lee remains active in the fight against the power. Because newspaper reviews were not supposed to give away plot spoilers, I did not mention that Do the Right Thing ends with the Radio Raheem character dying while in a police choke hold during a street protest. Lee made it clear at the time that the scene was intended as a reminder of the 1983 death of graffiti artist Michael Stewart, a young black man who was beaten and choked while in police custody. The routine use of deadly force by law enforcement, he insisted, was yet one more racially-charged issue that needed to be addressed.
Three decades later, a teenaged girl with a cell phone recorded the May 25, 2020 death of George Floyd beneath the knee of a white Minneapolis police officer. A few days later, Lee appeared on CNN with a 94-second-long film called 3 Brothers that opened with the words “Will History Stop Repeating Itself?” It intercut the real-life killings of George Floyd and Eric Garner (from 2014) with that of Do the Right Thing’s Radio Raheem. As Lee said to  anchorman Don Lemon, “We are seeing this again and again and again. This is the thing, the killing of black bodies, that is what this country is built upon.” He has every right to be angry. And, perhaps, hopeful. The days and months following Floyd’s death have seen worldwide protests against police brutality, calls for systemic reform and a serious discussion of the root causes. As he celebrates his 64th birthday (March 20), he shows no signs of retiring from the fight anytime soon.