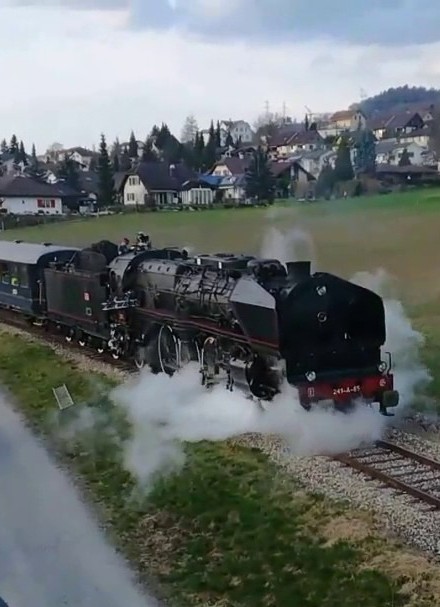 Putting in a star turn, the SNF “G” class Pacific locomotive 230-C-353 steals another scene in director Sidney Lumet’s 1974 adaptation of Murder on the Orient Express.


Riding the rails became a little less risky on this day (November 10) in 1887. In a move that wedded comfort with safety, the Canada Atlantic Railway became the first transportation company to heat its passenger coaches with steam from the locomotive, an innovation that eliminated the danger of fire from the small stoves previously used. Just two years earlier, on November 7, 1985, Canadian Pacific Railway founder Donald Smith had driven the last spike in a ceremony completing the nation’s first transcontinental railroad. For the next 70 years, rails ruled both in fact and in the popular culture. Before there were private jets, the egregiously rich travelled in their own luxury coaches and even the moderately wealthy enjoyed first-class amenities during their journeys to the far corners of the world. In 1934, Agatha Christie celebrated such delights in her eighth Hercule Poirot mystery, Murder on the Orient Express, a tale set on one of the most famous rail services, the Express d’Orient. It connected Paris to Istanbul from 1883 to 1977 (interrupted only by the 20th century’s two World Wars), and its period ambiance is vital to director Kenneth Branagh’s $55-million, all-star Murder on the Orient Express adaptation, opening in theatres today (November 10). Critics are sure to compare Branagh’s picture (in which he takes on the role of Belgian detective Poirot) to Sidney Lumet’s sumptuous 1974 version, also called Murder on the Orient Express.

Afterword: A nostalgia-driven confection in a year of gritty Oscar contenders — The Godfather: Part II was the best picture winner, among such nominees as Chinatown, The Conversation, Lenny and The Towering Inferno — director Sidney Lumet’s Murder on the Orient Express still managed to pick up a win (Ingrid Bergman as best supporting actress) out of six nominations.
All-star movies were in fashion during the 1970s, with 1974 offering audiences a choice of four. Included were director Jack Smight’s Airport 75, Mark Robson’s Earthquake, John Guillermin’s The Towering Inferno and, of course, Lumet’s Murder.
Its success set off a boomlet of Agatha Christie adaptations, all following the formula of filling the screen with familiar faces. The first of these, director Peter Collinson’s Ten Little Indians, was a five-nation European co-production based on her 1939 novel Ten Little Niggers. (For obvious reasons, the book was later retitled And Then There Were None, though the American distributor of the 1975 movie had no trouble with the equally derisive Indians version.) Actor Peter Ustinov became Poirot for the next A-list star gathering, John Guillermin’s Death on the Nile (1978), and Angela Lansbury played Jane Marple in Guy Hamilton’s The Mirror Crack’d (1980). Ustinov returned for two more outings as Poirot — 1982’s Evil Under the Sun, also directed by Hamilton, and Michael Winner’s Appointment with Death (1988) — before audiences lost interest. Largely forgotten, but worth mentioning because of its Canadian connections, is Ordeal by Innocence, British television director Desmond Davis’s 1985 adaptation of Christie’s 1958 novel. Top-billed were Donald Sutherland and Christopher Plummer, actors who had earlier worked together in Bob Clark’s all-star 1979 Sherlock Holmes feature Murder by Decree.

See also:  Another movie in which a train has a starring role is Silver Streak,