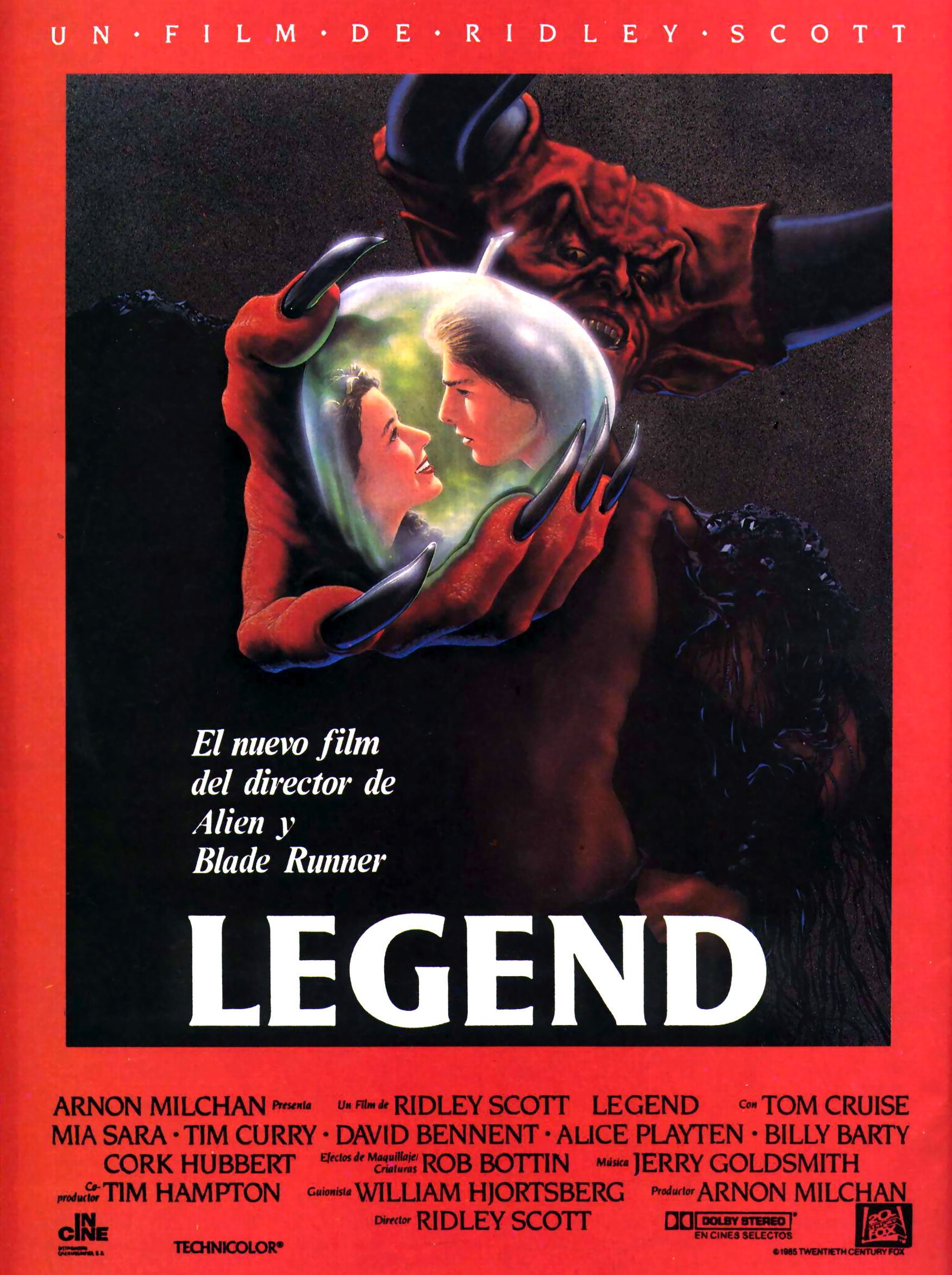 Released in Spain for Christmas 1985, the European version of director Ridley Scott's Legend featured the music of Jerry Goldsmith.


Wit for Europe, violence for America


Ridley Scott should have seen it coming. For some reason Scott, born on this day (November 30) in 1937, took it into his head that what the world needed was yet another go at the plague-ridden tale of Moses and Ramses. Scheduled for North American release on December 12, his version is called Exodus: Gods and Kings. The picture, shot on Spanish locations, is currently under attack from all sides. Fundamentalist Christians, who usually welcome biblical epics, are concerned about avowed atheist Scott's reported treatment of the story's miracles as natural events. African-American gadfly Tariq Nasheed has targeted the picture's "racist" casting. The author and documentarist, responsible for 2010's Hidden Colours, has called for a boycott of Scott's movie because its principal characters are played by white actors. With the word being spread by social media, Scott faces the possibility that his $140-million middle-eastern, caught between the horns of audience anger and indifference, will suffer the same fate as his 1992 feature 1492: Conquest of Paradise and his 2005 Kingdom of Heaven. It should all be over by December 19, the day that box-office champion Bilbo Baggins returns to the screen in The Hobbit: The Battle of the Five Armies. Scott, of course, had his own go at high fantasy in 1985, with the feature Legend.

Sunday, April 28, 1986.
LEGEND. Written by William Hjortsberg. Music by Tangerine Dream. Special makeup effects by Rob Bottin. Directed by Ridley Scott. Running time: 89 minutes. Mature entertainment with the B.C. Classifier's  warning: will frighten young children, some violence. RIDLEY SCOTT HAD A dream. A  filmmaker famous for his dazzling (Blade  Runner), horrific (Alien) visions of the future, he wanted to create  a gentle, tragic movie set within a mythic past.
Together with screenwriter William Hjortsberg, Scott developed an original, once-upon-a-time fairy tale. Filmed as Legend, it features a beautiful princess and her forest-child beau, fairies, goblins, unicorns and a Satanic villain known as the Lord of Darkness.
Said to have run approximately two hours, Scott's original version of the picture was re-edited by its overseas distributor, 20th Century-Fox. When it was released last fall [1985] in Europe, it was down to 94 minutes.
Before finding its way into North American theatres, Legend underwent a second re-editing from its domestic distributor, Universal. In addition to a thematic restructuring, the feature was given an entirely new musical soundtrack.
Composer Jerry Goldsmith's symphonic score, heard in the overseas cut, was dropped in favour of the contemporary synthesizer sounds of Tangerine Dream. The version on view locally runs a tight 89 minutes.
We'll probably never know whether or not Scott's own Legend realized his dream of greatness. I can tell you, though, that the version I saw last year in London was disappointingly diffuse and, on the whole, the American cut actually plays better.
Both versions begin by informing us that unicorns are the only thing holding back the rule of Darkness (Tim Curry, a chillingly effective evocation of evil in his red demon's make-up). Accordingly, the Lord of the Underworld sends forth a team of goblin assassins to dispatch the irksome creatures.
As luck would have it, handsome forest child Jack o' the Green (Tom  Cruise) picks this day to show off the sacred white beasts to his friend, the mortal Princess Lili (Mia Sara). Attracted by her innocence, the unicorn stallion advances to within range of the poison dart held by the goblin Blix (Alice Playten).
In developing his screenplay, the eclectic Hjortsberg drew from a wide range of folkloric sources. Elements of classical, Biblical, medieval and modern fantasy are congealed in a lumpy mixture of mythical motifs.
To undo the evil loosed on the world by the death of a unicorn, Lili and Jack embark on separate quests against Darkness. Before the final confrontation, the young woman will be wooed by the Evil One, while the young man will be courted by one of his own fairy companions, the lovelorn sprite Oona (Annabelle Layton).
Making the assumption that American kids are ill-equipped to handle material with literary resonance, the Universal editors simplify things by turning Scott's picture into a music video. The nature of the young couple's initial attraction has been shifted from a spiritual to a physical one by a rearrangement of the footage.
Scenes establishing Jack's special language skills, his quick wit and cool cunning have been cut, lobotomizing the character into a simple romantic hunk with a strong sword arm. Tangerine Dream's music actually fits the picture's new, dumbed-down mood perfectly.
Richly visual. the American version of Scott's film ends up looking like an awkward cross between 1984's The Neverending Story and The Company of Wolves (also 1984). In its present form, Legend makes little narrative sense but, hey, it's got that '80s beat.

Afterword: I can't work up a lot of sympathy for television commercial-turned-feature-filmmaker Scott. My negative feelings towards the English-born director go back to his treatment of Jerry Goldsmith. Scott's replacement of Goldsmith's Legend score, that I mention in the above review, was the director's second betrayal of the composer. Provided with a brilliant score for his debut Hollywood feature, 1979's Alien, the young auteur replaced portions of it with items from the temp track and a Howard Hanson symphony to achieve his "vision." The fact that Goldsmith was willing to work with him a second time speaks well for the composer's generosity. The result suggests that Scott remained a jerk. Between Alien and Legend, Scott collaborated with Vangelis on the score for Blade Runner (1982). Unspecified "disagreements" between director and composer prevented the release of the original soundtrack recordings for some 12 years. Scott's second film with Vangelis, 1492: The Conquest of Paradise (1992), must have been a sobering experience for the director. The film tanked; the soundtrack album was a great success. In 2002, Universal Studios released Legend in an "ultimate edition" DVD package that included both the European cut, with the Goldsmith score, and the U.S. theatrical release, with Tangerine Dream's music. Knighted in 2003 for "services to the British film industry," Sir Ridley is currently in Budapest filming The Martian, adapted for the screen by Drew Goddard from the 2011 novel by Andy Weir. To date, no composer has been announced for the picture.

See also: For a previous screen version of the Exodus myth, the one starring Anglo-Scottish actor Charlton Heston as Moses, see my review of director Cecil B. DeMille's The Ten Commandments (1956).