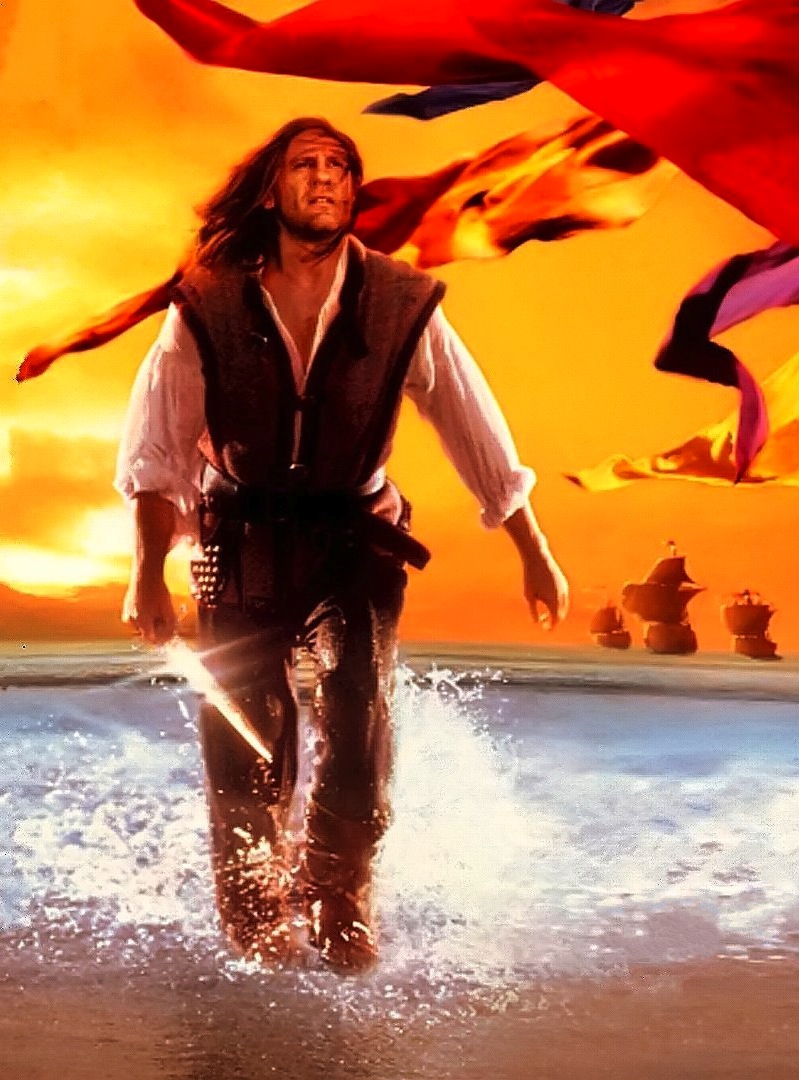 Pictured striding from the surf on the film's official poster, Cristophe Colomb (Gerard Depardieu) is a take-no-prisoners hero in director Ridley Scott's 1492: Conquest of Paradise.


All beautiful surfaces, no discernible depth


In fourteen hundred ninety-two (a couplet every school kid knew), Columbus sailed the ocean blue. In the U.S. today (October 13), many citizens are enjoying the statutory holiday called Columbus Day, a reflection of the mythic status once accorded America's accidental "discoverer." Veneration of him reached its high point in the original 13 colonies when, during the 1776 insurrection, Columbia became the goddess-like personification of the new nation. After independence, there was a movement to name the country Columbia. Though that didn't happen, the federal capital, Washington, was built in its own "District" of Columbia. Cities, counties, rivers and mountains were named for her, and an 1843 patriotic ditty, Columbia, The Gem of the Ocean, served as an unofficial U.S. national anthem for nearly a century. (The Brits were not immune to its charm, with Queen Victoria herself sticking the label "British Columbia" on Canada's westernmost province.) Times change, and while historians are reassessing Columbus the man, indigenous peoples are rejecting the myth. In 2004 in Venezuela, on the October 12 holiday once known as the "Day of Discovery," young protestors toppled the century-old statue of Columbus from its pedestal in downtown Caracas. In 1992, there were two feature films marking his first voyage's 500th anniversary. The second one, distributed by Paramount Pictures, was called 1492: Conquest of Paradise.

Sunday, October 11, 1992.
1492: CONQUEST OF PARADISE. Written by Roselyne Bosch. Music by Vangelis (Evangelos Papathanasiou). Directed by Ridley Scott. Running time: 149 minutes. Rated 14 Years Limited Admission with the B.C. Classifier's warning "some violence, occasional nudity." THE QUEEN IS NOT amused.
"The New World is a disaster," says Isabel, Queen of Castile (Sigourney Weaver). Her admiral, the Italian navigator Cristophe Columb (Gerard Depardieu) promised her gold for her treasury, souls for her God and the glory of empire for her newly unified Spanish nation.
She'd sponsored him in 1492, providing him with three ships and their crews. He returned with news of an Edenic "new world," some gold and more promises.
She'd honoured him in 1493, conferring lands and titles upon him. He returned from his second voyage disgraced and in chains.
And now he stands before her, a worn but unrepentant prisoner. Against the advice of her ministers and nobles, the great queen asks for one more excuse to share his explorer's dream.
Ready for another one, no better than the other one?
Ridley (Blade Runner) Scott's two-and-a-half hour 1492: Conquest of Paradise, is no big improvement over John (Octopussy) Glen's two-hour long Christopher Columbus: The Discovery.
Granted, it's prettier. A man famous for his visual sense, Scott makes movies that seduce the eye with their striking compositions, living light and palpable textures.
His 1492 is an album of stunning images. When he silhouettes Columbus's three caravels against a golden-bronze sky, the moment is suitable for framing.
Unfortunately, Scott's film is no more profound than Glen's, and a lot more pretentious. Calling it "Conquest of Paradise" identifies it as a melancholy tale.
Emphasizing the tragedy rather than the triumph, Roselyne Bosch's episodic screenplay relies on our knowing more history than it's willing to explain, but not enough to notice the errors and omissions.
Personally, I'm less of a stickler for historical accuracy when a film-maker offers a good story, honestly interpreting individuals and events. Roland Joffe's intense, emotionally vital The Mission (1986) falls into that category.
In a desperate attempt to be amusing, Glen's Columbus film offered bluster and bosoms amidst the politically correct historical gloom. Indeed, actor George Corraface can take his place with Klinton (The Legend of the Lone Ranger) Spilsbury and Sam (Flash Gordon) Jones as stars who failed to ignite in failed big-budget features.
Scott, by contrast, insists on portraying his hero as some kind of tortured saint. Depardieu, a Frenchman who speaks English even less surely than Arnold Schwarzenegger, is all nose and hair in the role.
Looking less like a leader than a man who can't remember where he's parked his car, the actor shambles through the scenery, pausing every so often to strike a photogenic pose.
Weaver, a more confident presence, plays Isabel as if she were England's Elizabeth I. No matter; along with everyone else in the cast, she photographs well.
1492: Conquest of Paradise is all beautiful surface with no discernible depth.

Afterword: Burnishing the Columbus legend was right up British-born Ridley Scott's alley. Since making his feature film breakthrough with the truly frightening science-fiction thriller Alien, the former television commercials director built a reputation as a cinema stylist with such features as 1982's Blade Runner and Legend (1985). Despite the box-office failure of 1492: Conquest of Paradise, Scott remained the go-to guy for pre-modern historical pageantry — titles such as 2000's Gladiator, Kingdom of Heaven (2005), Robin Hood (2010) and the 2014 Christmas release Exodus: Gods and Kings. The Christopher Columbus story, as it turned out, has been something of a British film-makers' speciality. A Scot, David MacDonald, directed Fredric March in the sound era's first telling of the tale, the London-made epic Christopher Columbus (1949). In 1992, the Yorkshireman Gerald Thomas attempted to revive the moribund Carry On comedy series with Carry on Columbus, starring Jim Dale in the title role. The 31st (and last) of the Carry On pictures, it was not a success. Nor was that other 1992 release, Christopher Columbus: The Discovery, helmed by Scott's fellow Brit, John Glen.

See also: Last year at this time, Reeling Back sliced into some Thanksgiving turkey to mark the Canadian holiday celebration. On offer was a package of five theatrical motion pictures that were inspired by popular TV series, a collection of big screen gobblers that included 1994's The Flintstones, The Addams Family (1991), Car 54, Where Are You? (1994) and The Nude Bomb, the aptly named Get Smart feature from 1980. Also included were two films spun off from skits that were part of the shows Saturday Night Live and SCTV — a final portion of turkey: 1993's Coneheads, and something tasty to wash it all down: Strange Brew (1983).