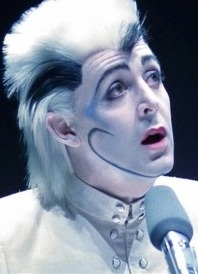 Vanity thy name is Paul


Day wasted in the mind of a pop star


“The job of the artist,” Marshall McLuhan told us in 1973, “is to upset all the senses, and thus provide new vision and new powers of adjusting to and relating to new situations.” Sixteen days from now (Thursday, December 12) British voters go to the polls in an election likely to mark the end of “Great” Britain. True to their McLuhanian task, artists have been warning of just such a decline for decades. On this day (November 26) in 1976, the Sex Pistols released their debut single “Anarchy in the U.K.”, launching the musical movement known as punk rock. If the Beatles, all born during the Second World War, embodied their era's optimism, the Boom Generation’s Pistols (all born in the mid-1950s) represented pop cultural pessimism. While Americans were celebrating their bicentennial, the English were shaken by race riots at the Notting Hill Carnival, a fixture from the days of “Swinging London.” There are those who would argue that the United Kingdom that came together in 1706 will soon join the British Empire as an historic memory. Artists, for all their insights, are an inward-looking lot. Not surprisingly, their stories are often self-absorbed, much like the four unmistakably English films being added today to the Reeling Back archive (with links to each following the Afterword to this posting). Hired by Paul McCartney to launch his post-Beatle movie career, adman Peter Webb directed the musician’s 1984 soundtrack-promoting feature, Give My Regards To Broad Street.

GIVE MY REGARDS TO BROAD STREET. Written by Paul McCartney. Music by Paul McCartney. Directed by Peter Webb. Running time: 108 minutes. General entertainment. THE BEST THING ABOUT Give My Regards to Broad Street is Paul McCartney's Victorian dream-within-a-dream. During a performance of Eleanor Rigby, the pop star's eyes glaze over and we see the scene shift from the basement of the BBC to a park-like river embankment.
Together with wife Linda (Linda McCartney) and their friends Ringo (Ringo Starr) and Barbara (Barbara Bach), Paul is setting out in a boat for a little déjeuner sur l'herbe. Inside their picnic basket is a glowing blue slab.
As a quartet of sinister strangers approach him, and his companions are betrayed to some white water by Paul's duplicitous boatman, Harry (Ian Hastings), Paul suffers not only the loss of his friends, but of their precious blue slab as well.
Later, on a London street, he sees Harry beaten by a burly miscreant, then stabbed by a gentleman with a sword-cane. Played out wordlessly with orchestral mood music, this period mini-drama is the closest the picture ever comes to being either interesting or imaginative.
It also succinctly summarizes the worst fears of Paul in his main dream reverie in which Harry, a trusted employee, goes missing with the boxed master tape of the singer/composer's new album. Utterly bland, the picture is rated General without any B.C. Classifier’s warning.
Being sold as a “day in the mind of a pop star,” it was written by McCartney as as wrapper for 12 new and used songs. We get to watch as Paul goes about the business of singing in a recording studio, on movie studio sets, in a rehearsal loft and the Royal Albert Hall.
In place of plot, the picture lets us play spot-the-rock-stars included within the various groups seen backing up the ex-Beatle. The pronounced middle-of-the-road sound to most of the musical arrangements suggest that McCartney may be turning into rock's own Lawrence Welk.
A dreary directorial debut for former Ridley Scott associate Peter Webb,  Give My Regards to Broad Street is on view in stereophonic sound.

Afterword: During their ten years together (1960-1970), the Beatles were a worldwide phenomenon. After the band’s breakup, its members remained headline newsmakers individually. Together with his second wife Yoko Ono, rhythm guitarist John Lennon became an international peace activist. He was murdered by a disenchanted fan in New York in December, 1980.
Lead guitarist George Harrison combined his solo career as a musician with humanitarian work and a positive involvement in cinema as a founder of Britain’s Handmade Films, where he produced more than 20 feature films. He died in 2001 of lung cancer.
Drummer Ringo Starr, who celebrated his 79th birthday in July (2019), continued recording music and pursued a career as a movie actor, appearing in such features as The Magic Christian (1969), Caveman (1981) and Give My Regards to Broad Street.
I was never a Beatles fan, and generally considered Paul McCartney the least interesting of the lot. Give My Regards to Broad Street, director Peter Webb’s only feature film, was essentially a vanity project for its writer-producer who really wanted to be a movie star. Though the soundtrack sold well, the film bombed badly, and McCartney gave up on acting.  Among the consolation prizes he’s collected over the years was a knighthood, conferred upon him by Her Majesty Queen Elizabeth for his “services to music.” In September (2019), a BBC interviewer asked Sir Paul about the Brexit referendum. “Probably a mistake,” the old gentleman said, adding that he doesn't think "anyone quite knows what to do with” the U.K.'s scheduled withdrawal from the E.U.  "I think it's a mess,” he said, admitting to not having cast a ballot in the 2016 Brexit vote, "and I will be glad when it's over."