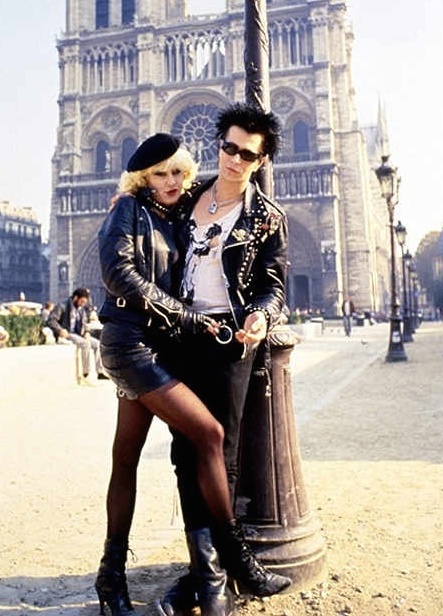 
“The job of the artist,” Marshall McLuhan told us in 1973, “is to upset all the senses, and thus provide new vision and new powers of adjusting to and relating to new situations.” Sixteen days from now (Thursday, December 12) British voters go to the polls in an election likely to mark the end of “Great” Britain. True to their McLuhanian task, artists have been warning of just such a decline for decades. On this day (November 26) in 1976, the Sex Pistols released their debut single “Anarchy in the U.K.”, launching the musical movement known as punk rock. If the Beatles, all born during the Second World War, embodied their era's optimism, the Boom Generation’s Pistols (all born in the mid-1950s) represented pop cultural pessimism. While Americans were celebrating their bicentennial, the English were shaken by race riots at the Notting Hill Carnival, a fixture from the days of “Swinging London.” There are those who would argue that the United Kingdom that came together in 1706 will soon join the British Empire as an historic memory. Artists, for all their insights, are an inward-looking lot. Not surprisingly, their stories are often self-absorbed, much like the four unmistakably English films being added today to the Reeling Back archive (with links to each following the Afterword to this posting). Director Alex Cox performs something akin to open-heart surgery on the punk ethos with his harrowing 1986 look at the Sex Pistols bassist and his love, the story of Sid and Nancy.

SID AND NANCY. Co-written by Abbe Wool. Music by Dan Wool. Co-written and directed by Alex Cox. Running time: 112 minutes. Restricted entertainment with the B.C. Classifier’s warning: frequent very coarse language, some violence, occasional nudity and suggestive scenes.
VIEWED STRAIGHT ON, THEIR love story makes no sense at all. A pair of selfish, stupid, utterly repulsive individuals, Sid and Nancy are no good for each other or for anyone else.
The bass player with a British band called the Sex Pistols, John Simon Ritchie, alias Sid Vicious (Gary Oldman), lives his punk rock rebellion. According to the group’s manipulative manager Malcolm McLaren (David Hayman), he “embodies the dementia of a nihilistic generation.”
Drug-addicted groupie Nancy Spungen (Chloe Webb) is the girl of Sid’s sordid nightmares. A Pennsylvania princess, she embodies the anger and total despair that McLaren so cynically exploits.
Too dumb to distinguish commercial image-making from reality, Sid enters into a violent, all-consuming relationship with the self-destructive young woman. Eventually, she dies in what screenwriters Alec Cox and Abbe Wool suggest is a failed suicide pact,
We learn that Sid himself died shortly afterward, the victim of a drug overdose. Not mentioned is the fact that he was awaiting trial for Nancy’s murder.
As a film, Sid and Nancy probably shouldn't be viewed straight on. Like director Cox's previous picture, the off-centre 1984 rock comedy Repo Man, this is a picture for the peripheral vision, a movie in which the real story unfolds along the edges of the narrative.
What's fascinating here is Cox's examination of punk as a pop phenomenon. For the most part, England is seen to regard it as yet another example of hype, a passing phase viewed with a mixture of long-suffering, tolerance and occasional outrage.
In France, we are shown Sid's self-indulgent "art" getting the ultra-sophisticated, high-style, high-tech treatment. In the U.S., by contrast, the performer encounters real rage, and the roots of Nancy's desperate, death-oriented emptiness.
What Sid's hollow eyes see in America — strung-out junkies lined up in the streets, fresh-faced groupies lined up by his bed — shrivels his already shrunken soul into an ashen lump. The dementia that he is supposed to embody finally reaches out to destroy him.
No, it's not pretty. A picture best viewed with the rods rather than the cones, Sid and Nancy is a real life tragedy, the compelling chronicle of a pair of withered, wasted lives.

Afterword: London-born stage actor Gary Oldman made his movie breakthrough as the unsympathetic title character in Alex Cox’s unsparing Sid and Nancy. For the next 10 years, he made withered, wasted characters his speciality, playing such intense roles as closeted gay playwright Joe Orton (in director Stephen Frears’s 1987 biographical drama Prick Up Your Ears), presidential assassin Lee Harvey Oswald (in Oliver Stones’ 1991 JFK) and the vampire Count (in Francis Ford Coppola’s 1992 Bram Stoker’s Dracula). A thorough professional, Oldman has proven his versatility. In the last decade, he’s upped his game to hero status with roles that include Batman’s ally, Gotham police commissioner James Gordon (in three Christopher Nolan Batman franchise features), American rock icon Elvis Presley (in Michael Winnick’s 2012 Guns, Girls and Gambling), and a British Prime Minister who wasn’t a sick joke, Winston Churchill (an Oscar-winning performance directed by Joe Wright in 2017’s Darkest Hour.)
In common with all movies that purport to be “based on a true story,” Darkest Hour has been criticized as “historical fiction.” It is, of course, common knowledge that screenwriters seldom let documented fact come in the way of a good story. What makes Darkest Hour (and Christopher Nolan’s 2017 feature Dunkirk) problematic is the part they have played in the U.K.’s ongoing Brexit debate. In a 2018 opinion piece, Spectator columnist Charles Moore called the film “superb Brexit propaganda.” Moore was echoing Guardian columnist Ian Jack, who lamented that the two films “fuel Brexit fantasies.” Phrases such as “Brexit Cinematic Universe ” and “Churchill myth-making and the great Brexit fiasco” are used to draw attention to the part popular culture is playing in the current historical moment. As for Churchill himself, Gary Oldman has said that he would have been a Remainer. In a 2018 interview with Spanish website El Mundo, the actor said the Second World War leader ultimately wanted a “United States of Europe.” To current British Prime Minister Boris Johnson, author of a 2014 biography of the Conservative Party icon, Oldman says “Churchill would not have allowed Brexit. In any case, he would agree with those who oppose it.”