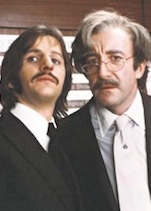 Voyage of the damnable


Making the most of an awful muddle


“The job of the artist,” Marshall McLuhan told us in 1973, “is to upset all the senses, and thus provide new vision and new powers of adjusting to and relating to new situations.” Sixteen days from now (Thursday, December 12) British voters go to the polls in an election likely to mark the end of “Great” Britain. True to their McLuhanian task, artists have been warning of just such a decline for decades. On this day (November 26) in 1976, the Sex Pistols released their debut single “Anarchy in the U.K.”, launching the musical movement known as punk rock. If the Beatles, all born during the Second World War, embodied their era's optimism, the Boom Generation’s Pistols (all born in the mid-1950s) represented pop cultural pessimism. While Americans were celebrating their bicentennial, the English were shaken by race riots at the Notting Hill Carnival, a fixture from the days of “Swinging London.” There are those who would argue that the United Kingdom that came together in 1706 will soon join the British Empire as an historic memory. Artists, for all their insights, are an inward-looking lot. Not surprisingly, their stories are often self-absorbed, much like the four unmistakably English films being added today to the Reeling Back archive (with links to each following the Afterword to this posting). Director Joseph McGrath mounts an over-the-top satirical attack on aristocratic privilege and the decline of the empire in his 1969 adaptation of Terry Southern’s The Magic Christian.

THE MAGIC CHRISTIAN. Co-written by Peter Sellers and Terry Southern, based on Southern’s 1959 novel. Music by Ken Thorne. Co-written and directed by Joseph McGrath. Running time: 92 minutes. AS FAR AS SIR GUY Grand is concerned, the world is in an awful muddle. It’s so full of lead-bottomed traditions, customs and social conventions that nobody appreciates the mystery of life.
An eccentric British millionaire, Sir Guy (Peter Sellers) sets out on a single-minded crusade to create more mystery, determined to outrage society and lead all of its sacred cows to the slaughter.
A single scene from The Magic Christian tells all. Sir Guy is on the moor hunting pheasant. The conversation among the aristocrats turns to the beauty of the clean kill. Of course, agrees Sir Guy, a sudden fanatic gleam in his eye.
Submachine-gun in hand, he leaps forward, flushing the game birds from their nests with a spray of bullets! As they take to the air, he radios range directions to an artillery battery which immediately doffs its camouflage netting and begins to lay down a flak pattern.
Finally, a bird falls to the ground. Instantly, an infantryman appears from the brush and roasts the carcass with a blast from a flamethrower. A chef arranges the charred fowl on a silver platter and presents the dish to Sir Guy, while a marching band plays a salute to his "clean kill.”
For director Joseph McGrath, such excess is typical. One of five directors who worked on 1967’s Casino Royale, McGrath is generally credited with that film’s frantically unfunny “way-out” comedy sequences.
What style he has all seems to have been lifted wholesale from some of the more disciplined young lions of the British cinema, innovators such as Tony Richardson and Richard Lester. To their techniques, McGrath has added little, except the occasional homage to classic lovers (the seven fantasy sequences in 1968’s The Bliss of Mrs. Blossom) or a reference to Eisenstein’s Potemkin (1925) toward the end of The Magic Christian.
McGrath, a former London TV director, shared script writing duties with American satirist Terry Southern (author of the 1959 novel) and comedian Peter Sellers. Their combined movie experience counts for very little in the result.
Like the costly Casino Royale, The Magic Christian is a disjointed collection of intermittently funny sketches. The humour is often fey and occasionally overly English. The routines themselves are inconsistent and give the film as a whole a feeling of incoherence.
The cast is heavily laden with briefly appearing guest stars — among them Richard Attenborough, Laurence Harvey, Christopher Lee, Roman Polanski, Yul Brynner and Raquel Welch — but the main performances are given by Sellers and Ringo Starr. The Beatle drummer plays Sir Guy’s adopted son and conversational sounding board, Youngman. Neither works very hard.
Truth to tell, there’s not a lot to work for. Sir Guy believes that every man has his price. He pays people to make fools of themselves to continually prove his point. Any TV game show can turn the same trick.
Director McGrath could take a few lessons from American underground filmmaker Robert Downey, the man who made 1969’s Putney Swope. A black adman, his Swope performs the ultimate feat. The fools pay him to be put on.

Afterword: Joseph McGrath may not have been a major creative talent, but he did have the good luck to be part of a moment of rapid cultural change. A Scots-born TV director, he seems to have worked with every significant British comic talent of the 1960s, a Who’s Who that included Spike Milligan, Peter Cook, Dudley Moore and Peter Sellers, as well as John Clesse and Graham Chapman in the days before Monty Python. Having collaborated with director Richard Lester on his two Beatles features — A Hard Day’s Night (1964), and Help! (1965) — McGrath went on to direct the Fab Four in nine 1965 music videos. It all came together in his third full-length feature, The Magic Christian.
According to its Wikipedia page,