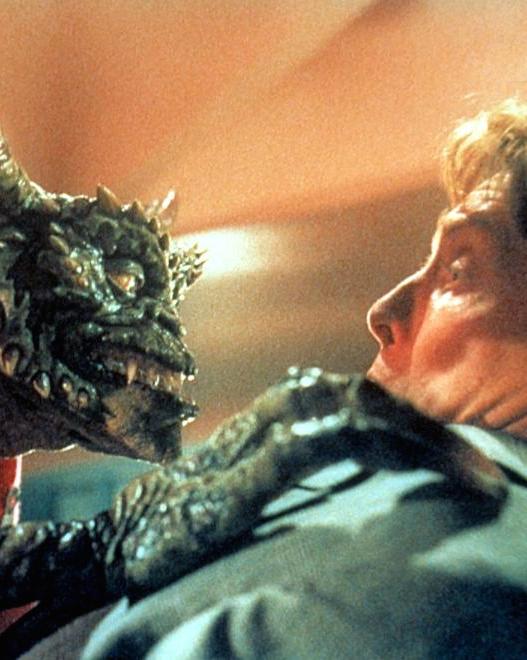 What do gremlins want?


Charting the chaos that is civilization


An artist with a deep appreciation of the Looney Tunes legacy, director Joe Dante set out to make movies great again. Born on this day (November 28) in 1946, he anticipated the promise and confusion of our own anarchic times in his 1990 corporate-media fantasy Gremlins 2: The New Batch.

THE GUEST IS SEATED and the ON AIR lamps are lit. Grandpa Fred (Robert Prosky) gets right to the point.
What do gremlins want?
It's a good question, considering the interviewer is not a professional newsman. Until today, Fred worked as the Clamp Cable Network’s own Count Floyd, dressing up as a vampire to introduce old horror movies.
Fred’s interview subject, a bespectacled little monster in a professorial tweed jacket, offers a succinct, perfectly reasonable answer.
What gremlins want is “civilization.”
With his intelligence enhanced by a “brain hormone” from the Splice O’ Life “designer genes” laboratory, the grinning, green-skinned creature sounds just like Tony Randall (who supplies the voice performance). As spokes-thing for his kind, he is witty and persuasively candid.
Suddenly, a second gremlin appears on the talk show set. Smiling benevolently, Fred’s cultured guest turns his attention to the newcomer, produces a revolver and shoots him.
“Now, was that civilized?” he continues. “No.
“Fun, yes. But not civilized.”
Which about sums up Gremlins 2: The New Batch. On this outing, the little green guys just want to have fun.
In returning to the wellspring of his greatest success, director Joe Dante directly addresses the major quibble that critics and commentators had with his 1984 feature Gremlins — that it was needlessly nasty.
Conceived as a horror movie, it was reshaped as a shock comedy. Even so, a lot of scary bits remained. Despite its comic emphasis, the finished film contained much human death and destruction.
In the U.S., there was genuine public concern about such dark elements in PG-rated films. That, coupled with outrage over the level of graphic violence in another 1984 film, Indiana Jones and the Temple of Doom, led to the creation of a new American rating, PG-13.
In The New Batch, Dante is careful to signal parents that this Gremlins sequel is intended as a live-action cartoon. Animated superstars Bugs Bunny and Daffy Duck are on hand to open the film and establish a mood of non-lethal comic chaos.
Then, it’s on to the gremlins in Gotham, a tale in which the living glitches run amok in a high-tech Manhattan office tower. The continuing characters, smalltown sweethearts Billy Peltzer (Zach Galligan) and Kate Beringer (Phoebe Cates), now live in the Big Apple.
Both Billy and Kate work in the Clamp Centre, the highrise headquarters of mega-developer Daniel Clamp (John Glover). A parody blend of Donald Trump and Ted Turner, Clamp is about to begin work on his “Chinatown Centre: Where business gets oriented.”
His corporation’s efforts to buy out an aging curiosity dealer named Wing (Keye Luke, reprising his Gremlins role) will reunite Billy with Gizmo the Mogwai (again voiced by Howie Mandel). Shortly thereafter, hundreds — maybe thousands — of his chittering spawn appear in Fun City.
With a deep bow to the Warners cartoon masters — Avery, Clampett, Freleng, McKimson and Jones — Dante delivers up his own version of a Looney Tune.
As in their best cartoons, mood and logical consistency are less important than continuous, rapid-fire comic invention. The New Batch runs the gamut of anarchic effects, hauling out everything from surprise star turns to off-hand film references, off-type performances and visual puns.
Some of the payoffs are flagged well in advance. Anyone who saw Gremlins knows what’s coming when Gizmo catches a glimpse of Sylvester Stallone playing in Rambo on TV.
Later, when a conversation turns to holiday celebrations, you just know that the Christmas-hating Kate will have a terrible tale to tell about Lincoln’s Birthday.
Most of the humour is totally off the wall. I particularly liked the moment when Billy’s predatory boss, Marla Bloodstone (Haviland Morris), invites the lad to “a chic new restaurant.”
“It’s Canadian,” she says. “They clean the fish right at your table.”
Gremlins 2: The New Batch is a movie that answers the need for topical, totally out-of-control family fun.

Afterword: Less than three weeks after the 2016 U.S. presidential election, the line that leaps out of this 26-year-old review is my description of John Glover’s Daniel Clamp character:  “A parody blend of Donald Trump and Ted Turner.” Glover made his feature film debut in the 1973 action-comedy Shamus, and has been a reliable supporting actor ever since. For me, his most memorable roles remain the two that display his mastery of malevolent charisma: The Devil, working to contain the damage from a prison break from Hell, in the cult TV series Brimstone (1998-1999); and Lionel Luthor, the manipulative father of the teenaged Clark Kent’s billionaire nemesis Lex Luthor, during all 10 seasons of the made-in-Vancouver Smallville (2001-2011).
Director Joe Dante is one of the graduates of what has come to be known as “the school of Corman,” part of a generation of directors who made their feature film debuts working with, and for, independent movie producer Roger Corman. (Other alumni include Francis Ford Coppola, Martin Scorsese, Jonathan Demme, Ron Howard and Peter Bogdanovich.) What distinguishes Dante’s work is his unfailing sense of humour and delight in the possibilities of the filmmaking process. In a 2009 interview with The Scotsman, he agreed that the anarchic Gremlins 2 was “my id, you might say . . . It’s the one time someone came to me and said: 'We want this movie and we don't care what it is. Do whatever you want, just give it to us by this date'.”
Dante, whose worldview was informed by an early ambition to become a cartoonist, admits to another act of autobiography in his evocative 1993 Cuban missile crisis comedy Matinee. The Saturday matinee “was the highlight of my week,” he told The Scotsman. "I think it's fair to say that if I hadn't had that kind of childhood, I probably wouldn't be making films.” Dante’s appreciation of the marginal shone through in the anthology films to which he contributed segments in the 1980s: Twilight Zone: The Movie (1983), and Amazon Women on the Moon (1987).
Despite Matinee’s critical success, the director’s interests were out of sync with those of corporate Hollywood, with the result that his subsequent work has been in television. Recently, he touched down in Vancouver to direct Night of the Hawk, an episode of the Legends of Tomorrow superhero series, aired on March 10, 2016. Earlier this month, Internet entertainment news sites were abuzz with the announcement that Dante was planning a 2017 start on his feature biography of Roger Corman, The Man with the Kaleidoscopic Eyes. The picture will take up the producer’s story in 1967, focusing on his preparations for making the hippie-culture movie The Trip, a drive-in epic that involved Jack Nicholson, Peter Fonda and Dennis Hopper. Joe Dante celebrates his 70th birthday today (November 28).