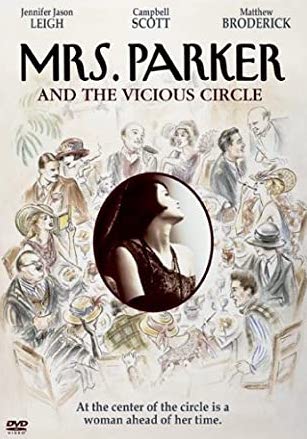 Positioned “At the center of the circle,” Jennifer Jason Leigh is the “woman ahead of her time" on the cover of the DVD release for director Alan Rudolph’s 1994 biographical drama Mrs. Parker and the Vicious Circle.


What have you learned, Dorothy?


Jennifer Jason Leigh is no stranger to the Great White North. Born on this day (February 5) in 1962, she made a working visit to Montreal to play the title role in director Alan Rudolph’s 1994 celebration of New York’s Smart Set, Mrs. Parker and the Vicious Circle.

MRS. PARKER AND THE VICIOUS CIRCLE. Co-written by Randy Sue Coburn. Music by Marc Isham. Co-written and directed by Alan Rudolph. Running time: 126 minutes. Rated Mature with the B.C. Classifier’s warning: "occasional nudity, suggestive scenes and very coarse language.” SHE IS REMEMBERED.
Born in the 19th century, Jazz Age critic Dorothy Rothschild Parker lived the life of a 20th century woman. A 1990s generation, uncertain about its own future, knows her through her ironic, survivalist verse.
Razors pain you;
Rivers are damp;
Acids stain you;
And drugs cause cramp.
(If you look carefully, you can see Parker’s poem spray-painted on the wall at 21 Jump Street, home to the undercover cops in the 1987 TV series of the same name.)
Guns aren't lawful;
Nooses give;
Gas smells awful;
You might as well live.
Writer-director Alan Rudolph insists that we remember the pain that produced such poetry. His uneven movie memoir, Mrs. Parker and the Vicious Circle, shows us a woman who "clearly lived with the blues."
"Though witty and clever," Rudolph tells us, "her humorous inventions were set in motion by what James Thurber once called ‘the damp hand of melancholy.' Dorothy Parker was a contradiction — a self-destructive survivor."
Part of the New York literary "Smart Set" following the First World War, she was the most prominent female member of the "vicious circle" — the writers and artists who gathered for lunch at the Algonquin Hotel's famous Round Table. At the centre of American middlebrow culture for nearly a decade, the Round Table has become something of an intellectual legend.
Rudolph and his co-writer Randy Sue Coburn see Parker's story as an American Remains of the Day. Parker (a tour de force of accent and attitude from Jennifer Jason Leigh), a working theatre critic, is estranged from her husband, financier Edwin Parker (Andrew McCarthy).
Her natural soulmate is writer Robert Benchley (Campbell Scott). Married with children, he's a repressed male unable to respond to her come-hithers.
"It's an intellectual relationship," we overhear someone say. "In their minds they hump like bunnies."
Frustrated, Parker takes up with playwright Charles MacArthur (Matthew Broderick). A pregnancy, abortion and suicide attempt follow. "It's a dependable fact of life," she eventually concludes. "Everything is always worse than you thought it would be."
Though the emotional focus is on Parker, we're shown the whole damned Round Table crowd. The effect is a lot like Lust for Paint, that 1977 SCTV parody of artists' biographies [inspired by the 1956 movie Lust for Life].
Alexander Woollcott (Tom McGowan) is forever greeting historic personages, a reminder of Dave Thomas and Eugene Levy at that Paris cafe. "Oh look, there's Louis Pasteur. Loo-eee! Yoo-hoo! It's us, Monet and Degas!".
Introducing such once-famous names as Edna Ferber, Will Rogers, George S. Kaufman, Robert Sherwood and Deems Taylor only serves to fragment our attention. As a result, the story of the remarkable woman, so vividly portrayed by Leigh, becomes a series of disconnected vignettes.
Rudolph is, of course, working in the multi-perspective style of his mentor Robert Altman. We can only wonder what a dark genius like Tim (Ed Wood) Burton would have made of such a demon-driven life.

Afterword: In the spirit of “video killed the radio star,” one might suggest that social media killed the public intellectual. The idea of a Smart Set in the age of Facebook-cum-Meta is suddenly fraught with issues of class, gender, ethnicity, education and, it must be said, mental health. In the above review, I mentioned “a 1990s generation, uncertain about its own future . . .” Mark Zuckerberg, among the masters of today’s tech universe, was just 10 years old when it was published. His legacy may be the replacement of intellectuals with influencers, assuming that the 2020s generation survives the current pandemic and accelerating climate change.
Too grim? These troubled time produce heavy thoughts, which put me in danger of brain strain. So, let’s instead recall the July 4, 1992 party at which director Robert Altman introduced Alan Rudolph to Jennifer Jason Leigh. Rudolph, who was among the celebrities to appear as themselves in Altman’s movie about moviemaking The Player, was working on a screenplay about the Algonquin Round Table. Leigh, who was about to begin work on Altman’s ensemble feature Short Cuts, actually looked like Dorothy Parker. Their meeting, a match made in Hollywood, resulted in a movie made in Montreal.