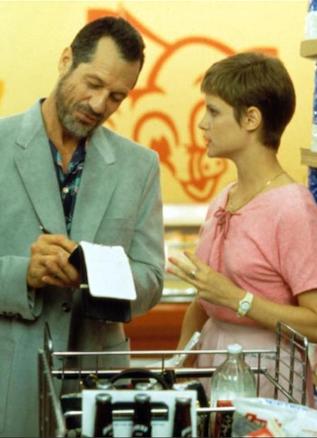 Stitching it all together


From the moment she arrived on screen, Jennifer Jason Leigh has been a force of nature. Born on this day (February 5) in 1962, she won our respect (if not our hearts) as Stacy Hamilton, the 15-year-old kid sister whose quest to lose her virginity was central to director Amy Heckerling’s trend-setting 1982 teen feature Fast Times at Ridgemont High. Leigh lost no time establishing her independence from the American movie mainstream. Her talent was recognized by Dutch director Paul Verhoeven, who personally cast her as Agnes, the keystone role in his first English-language production Flesh+Blood. In 1984, she was off to Europe to play a young 16th century noblewoman kidnapped on the way to her wedding. No submissive victim, her character survives rape, demonstrates intelligence and deploys cunning in a refreshing display of female agency in the movies. The daughter of a Hollywood actor (Vic Morrow) and screenwriter (Barbara Turner), Leigh made a career working with such idiosyncratic directors as Robert Altman, David Cronenberg, Jane Campion and Todd Solondz in the sort of edgy roles that critics take delight in. Finally, her performance in Quentin Tarantino’s 2015 Western The Hateful Eight earned her a long-overdue Oscar nomination. In today’s six-feature package (with links to all titles included following the Afterword), we revisit Leigh’s turn as the ever-hopeful prostitute “Pepper” Waggoner, in director George Armitage’s 1990 urban drama Miami Blues.

MIAMI BLUES. Based on the 1984 novel by Charles Willeford. Music by Gary Chang. Written and directed by George Armitage. Running time: 97 minutes. Restricted entertainment with the B.C. Classifier’s warning "suggestive scenes, some violence and nudity.” HEY, I'M TOUGH.
I’ve been to the 'Nam (by way of Apocalypse Now), aboard the Nostromo (Alien),  to hell (Hellraiser) and to the Rickshaw Club (Cold Front).
Even tough guys like me have to turn away during the needle-and-thread scene in Miami Blues, though.
But I'm getting ahead of myself. Life, after all, is a mixture of pain and pleasure, something that mystery writer Charles Willeford had a nice handle on.
Willeford, who died in 1988, wrote about life in a big city served by a rough police sergeant named Hoke Moseley. In 1985, actor Fred Ward read a Moseley novel and optioned it for the movies.
Ward, on the lookout for an attention-grabbing role, saw himself playing the part of Willeford's Miami Blues villain. A murderous sociopath, Frederick J. Frenger, Jr., is a character full of charm, ingenuity and sudden, deadly violence.
The actor took his acquisition to Jonathan Demme, the man who directed him in 1984’s Swing Shift. Think of Demme and you think of comedies with an edge of danger, movies like Something Wild (1986) or Married to the Mob (1988).
In Miami Blues, Ward had a thriller with a comic edge. Picture a seedy, pain-wracked, middle-aged cop. Apparently off-duty, shopping basket in hand, he "accidentally" runs into a young, slow-witted ex-hooker, "Pepper" Waggoner (Jennifer Jason Leigh), in a suburban supermarket.
What do they talk about?
Why, cooking, of course.
Moseley passes along his special pork chop recipe. Pepper has some advice for him on the preparation of an old South Florida favourite, vinegar pie.
Demme was enthusiastic about the project but not about directing. Signing on as producer, he recommended his old friend from the Roger Corman New World Film days, action-exploitation expert George Armitage.
An inspired choice, Armitage wrote his own screenplay, one that captures the battered humanity of fringe folk living a frontier existence in modern America.
“My problem is that I can have anything and everything I want,” villain Frenger says with self-assurance. “But I don’t know what I want.”
Frenger is played not by Ward but by Alec Baldwin (still on view [in 1990] as CIA analyst Jack Ryan in The Hunt For Red October). Attractive and darkly charismatic, he excites dreams of white-picket-fence domesticity in pretty, naive Ms Waggoner.
Jennifer Jason Leigh, in Holly Hunter mode, brings just the right amount of damaged hope to the role of the young prostitute. When Moseley’s partner, Detective Ellita Sanchez (Nora Dunn) calls her “Princess-Not-So-Bright,” it’s less a put-down than a poignant expression of understanding.
Ward is Moseley, providing a solid portrait of a tired, aging professional who suffers the humiliation of having his badge, gun, handcuffs and dentures stolen by the bad guy. He also takes a vicious beating in the process.
About that needle and thread scene. Near the end of the story, one of the principal characters — I’m not saying who — is cut by flying glass, sustaining a nasty injury above the left eye.
The character insists on self-repair. Neither the super-heroic stitchery of Rambo (in First Blood) nor Patrick Swayze (Road House) can compare to the raw, wince-inducing realism of this particular screen moment.
Its power is a tribute, not to special effects, but to director Armitage's ability to involve us in the intense, tragi-comic lives of his characters.

Afterword:  Fred Ward was definitely on to something. As the above review notes, bringing Charles Willeford’s Hoke Moseley character to the screen was his idea. Willeford wrote four Moseley novels between 1984 and 1988 so, had director George Armitage’s movie been a box-office success, Miami Blues might have been the basis for a film franchise or a TV spinoff. That great supermarket scene between Ward’s Moseley and Jennifer Jason Leigh’s “Pepper” Waggoner suggested that there was real potential in the intersection of cops and cuisine.
Twelve years earlier, Ted Kotcheff’s black comedy Who Is Killing the Great Chefs of Europe? hinted at something similar. Three months after Miami Blues was released, a show called Master Chef made its debut in London. The first of the TV celebrity cook competitions, it was part of a reality program trend that began with 1989’s COPS (a show currently in its 33rd season), a trend that really took off in the late 1990s.
For Ward, who includes a brief stint as a short-order cook on his career resumé, this seems to have been a missed opportunity. The idea did not go away, though. As recently as 2019, an action comedy called Extreme Job set box-office records in Korea. It told the story of some undercover police team members who discover that they’re really better at running a restaurant. Lobster Cop, the movie’s Chinese version, enjoyed similar success in the PRC, and a U.S. remake is said to be in the works. I wouldn’t be surprised to see Law and Order: The Cookbook turning up any day now.