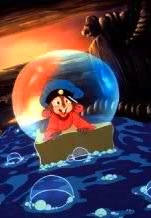 Fievel Mousekewitz is washed overboard in a storm, a scene that allowed director Don Bluth's cartoon studio to demonstrate its skill at animating water in 1986's An American Tail.


And the streets are paved with cheese


Today (September 14), an emergency meeting is being held in Brussels to discuss the European refugee crisis dominating world news headlines. Meanwhile, in the U.S., immigration remains an election issue almost as dire as it was in Don Bluth's 1982 feature An American Tail.

Friday, November 21, 1986.
AN AMERICAN TAIL. Written by Judy Freudberg and Tony Geiss. Music  by James Horner and Barry Mann. Song lyrics by Cynthia Weil. Co-produced and directed by Don Bluth. Running time: 78 minutes. General entertainment. PAPA MOUSEKEWITZ (THE VOICE of Nehemiah Persoff) is a mouse with a dream. "In America," he tells his wide-eyed children, "there's a mouse hole in every wall."
Little Fievel (Phillip Glasser) and his sister Tanya (Amy Green) share their father's dream. "In America, there are breadcrumbs on every floor."
The year is 1885. Mice may be oppressed on the snowbound Russian steppe "but," says Papa, " . . . in America there are NO CATS!"
Don Bluth is a man who cherishes a dream. A Texas-born Mormon, he remembers an America in which magic once flowed from the pencils, pens and brushes of movie animators.
Bluth would like to return to the days of Fantasia and Pinocchio, a golden age in which art and imagination combined to produce cartooning's unchallenged classics. A Disney studio animator himself during the 1970s, he headed up a group of artists that left to set up their own company and practice the exacting craft that then seemed unimportant to the modern, diversified Disney corporation.
With The Secret of NIMH (1982), Bluth produced a film with the classic (read "golden-age Disney") look. Stunning visually, its emphasis on craft over story hinted that narrative might well be a problem for Bluth.
With An American Tail, Bluth forges a link with Steven Spielberg, one of the film industry's most successful story-tellers. Co-written by Sesame Street alumni Tony Geiss and Judy Freudberg, their feature is based on an idea originally presented to Spielberg during the making of 1984's Indiana Jones and the Temple of Doom, and it shows.
Beset by pogroms, the Mousekewitz family emigrates to America. Fievel, washed overboard by a storm, lands in the New World alone, and sets out in search of his parents.
Plotted like any number of recent Spielberg-produced adventures, An American Tail offers the family audience roller-coaster action rather than real emotion. In the process, Biuth and his colleagues show how well they can handle animation's most difficult subjects: fire and water.
In scenes more impressive than involving, we see flames flicker realistically above candles and torches, and consume villages. Waves sweep over ships' decks, rise, fall and shape themselves into frightening sea demons.
Less convincing is the character animation. Perhaps we've just seen too many cartoon cats and mice over the years, but whatever the reason, Bluth's cast of critters lack the definition, freshness and vitality that make  for lasting impressions.
In a year that has seen the Disney Studios bounce back with The Great Mouse Detective and a scheduled Christmas rerelease of a classic, 1955's Lady and the Tramp, Bluth's strengths and his still unresolved weaknesses are thrown into dramatic relief.
What An American Tail makes clear is that he remains a powerful contender.

Afterword: At the time of An American Tail's release, the phrase "boat people" had recently entered the language. It described about two million migrants who fled Vietnam in the years following the withdrawal of U.S. forces from Southeast Asia. By 1997, more than 400,000 had been accepted for resettlement in the U.S., with Canada taking in about 100,000. Though I can find no evidence that either director Don Bluth or producer Steven Spielberg were drawn to the subject of immigration by the news of the day, the idea was certainly in the air. And whether intended or not, their picture celebrated America's historic generosity in accepting "your tired, your poor, your huddled masses yearning to breathe free." Today (September 14, 2015), as the interior ministers of the 28 European Union countries gather in Brussels, generosity is not  guaranteed. In the U.S., there are those who argue the invitation famously featured inside the pedestal of the Statue of Liberty should be rescinded, and walls built along the nation's land borders with Mexico, and even Canada.
Back in 1986, An American Tail was another triumph for Spielberg, earning $150 million with a picture that cost a reported $9 million. Spielberg brought his Raiders of the Lost Ark  collaborator George Lucas on board as executive producer for his second project with Bluth, 1988's The Land Before Time. Anticipating his live-action dinosaur epic Jurassic Park (1993), the cartoon feature told the story of an orphan brontosaurus called Littlefoot. During the production, Bluth and Spielberg experienced "creative differences." They ended their working relationship, and Bluth had no involvement in the 1991 An American Tail sequel Fievel Goes West, or the twelve direct-to-video features in the subsequent The Land Before Time franchise (1994-2007).

See also: In a 1982 interview, Don Bluth discussed quitting his job at Walt Disney Productions and forming his own animation studio. In 1992, I reviewed his cartoon feature Rock-A-Doodle.