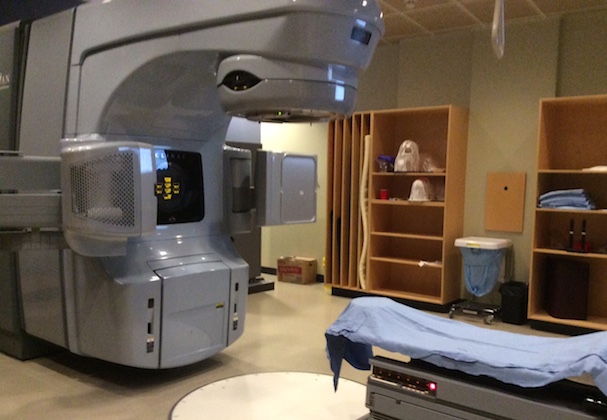 Visiting the linear accelerator at Unit D of the B.C. Cancer Agency was part of my daily routine during the month of April, 2018.
THE WHOLE STORY — To see a complete list of the more than 930 items currently posted to Reeling Back, visit the FULL SITE INDEX. To locate specific names or subjects, type your key word(s) into the Search box (located in the right-hand corner of the nameplate above), and click on the magnifying glass (search) symbol. The archive grows almost daily, so feel free to explore.

Reeling Back set back


The plan was to increase the number of postings to the website during my recovery from some recent medical issues. Today (September 4) I'll explain why that didn't happen. Be warned, this blog entry contains the somewhat disturbing C-word.

Reeling Back has been on hiatus since mid-May. Its absence from cyberspace was not part of my plan . . .

According to the U.S. government’s National Cancer Institute, approximately 11.2 percent of American men will be diagnosed with prostate cancer at some point in their lives. The Canadian Cancer Society tells us that one in seven Canadian men will develop the disease, and that one in 29 of them will die from it. On a more positive note, the CCS assures us that prostate cancer has a five-year relative survival rate of 95 percent. In 2017, an average of 58 of us were diagnosed with “the most common cancer among Canadian men” every day, and 11 died from it each day.

This story also involves some dates.

On January 9, on the advice of my urologist, I underwent an ultrasound and biopsy procedure. The official diagnosis of prostate cancer came on January 24, after which I was advised of my treatment options by a surgeon (February 1) and a radiation oncologist (February 28). Throughout, it was made clear that I would have all the information that I needed to make an informed choice, but that the ultimate choice was mine.

Additional tests — a bone scan on February 2 and a CT scan on March 7 — suggested that a course of radiation therapy was my best option. To prepare for that, there was a March 27 CT pre-scan, which included three pinpoint tattoos on my lower abdomen. These, I was told, would help the linear accelerator target its shots with precision. On April 3, I reported to Unit D of the B.C. Cancer Agency for the first of 20 radiation therapy sessions.

Regardless of the chosen treatment, there would be a recovery period. At my age, radiation seemed preferable to surgery. Since I expected to be relatively pain-free, I developed an active recovery plan that involved an increased commitment to Reeling Back. In late March, the site featured just over 900 postings. I was determined to cross the 1,000 mark by Labour Day. When the treatments ended on May 3, it was going along nicely.

I was advised that there could be side effects to radiation therapy. Fortunately, I was spared all of the messier ones. Unfortunately, I caught a really bad cold, which played tag team with the treatment's fatigue side effect. It provided a knock-out blow to all but my most basic brain function for, well, too long. This blog entry is my first posting since the one dated May 15.

A bare-bones chronology, it omits much from an intense, seven-months-and-counting experience. During that time I managed much reading and television, and even some live theatre. There were many personal encounters and, of course, it all resulted in too many thoughts and feelings to set down adequately.

According to the Canadian Life Expectancy Calculator website, I’m currently good for 86.1 years. Until then I’ll continue working on Reeling Back. Aside from this update, the five most recent postings were:

DEADLY CURRENTS — Made in 1991, Israeli-Canadian documentarist Simcha Jacobovici’s Genie Award-winning examination of the tragic conflict between the Israeli state and the Palestinian people seems even more relevant today. (Posted May 15)

THE LAIR OF THE WHITE WORM — Phallic symbolism, a defining characteristic of Ken Russell’s style, was generously deployed in the English director’s 1988 adaptation of Bram Stoker’s final novel, the story of a snake-obsessed Derbyshire noblewoman. (Posted May 11)

THE RAINBOW — Director Ken Russell broke through to international audiences in 1969 with his critically acclaimed adaptation of D.H. Lawrence’s Women in Love. In 1988, he offered this lush, nuanced adaptation of an earlier Lawrence novel about Ursula Brangwen’s coming of age. (Posted May 11)

SALOME’S LAST DANCE — An illicit production of Oscar Wilde’s notorious stage play, banned because it parodied a Biblical tale, is incorporated into director Ken Russell’s psycho-fantastic 1988 examination of the writer and his homosexuality. (Posted May 11)

PAPERHOUSE — British independent director Bernard Rose made his feature debut with this 1989 adaptation of a 1958 fantasy novel about a feverish 11-year-old who believes she has the power to make her dreams come to life. (Posted May 11)