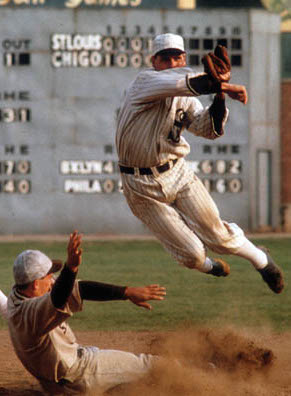 
In baseball, it seems, every day is historic. Yesterday (October 24), for example, was the 111th anniversary of Take Me Out to the Ballgame, the U.S. national pastime’s anthem. Written in 1908 by two guys (composer Albert Von Tilzer and lyricist Jack Norworth) who’d never been to a game, it was recorded by a pop artist (Billy Murray) who didn’t actually sing it. Ball fans are famous for their devotion to such obscure facts. For example, on this day (October 25) in 2007, Hideki Okajima of the Boston Red Sox became the first Japanese-born player to pitch in a World Series. Among the batters he retired was Kazuo Matsui, which made it the first time Japanese natives faced one another in the U.S. championship series. Today, of course, the Huston Astros meet the Washington Nationals at D.C.’s Nationals Park for the third game of the 2019 World Series. Canadians are taking a special interest in the match because the Washington team, founded in 1969 as the Montreal Expos, played its first 35 seasons in the Quebec metropolis. In 2005, the Nationals made their D.C. debut. Incidentally, it was on this day in 2005 that a World Series game was played for the first time in Texas. That year, the Astros, currently trailing the Nationals two games to zero, were eliminated in just four games by the Chicago White Sox. And that reminds us that this is the 100th anniversary of the sport’s most infamous moment: the “Black Sox” scandal that erupted in the wake of the 1919 World Series. In the fine style we'd come to expect from him, independent writer-director John Sayles turned that tale into a classic sports movie, his 1988 feature Eight Men Out.

Friday, September 23, 1988
EIGHT MEN OUT. Music by Mason Daring. Based on the 1963 book Eight Men Out: The Black Sox and the 1919 World Series by Eliot Asinof. Written and directed by John Sayles. Running time: 119 minutes. Mature entertainment with the B.C. Classifier’s warning: occasional very coarse language. SIMPLY PUT, THE FIX was in. When the dust cleared, eight men were tried for conspiring to throw the 1919 World Series.
In the dock were eight members of the pennant-winning Chicago White Sox, men who were part of the team that sportswriter Ring Lardner had labelled "the best ever.” They stood accused of having engineered their own defeat at the hands of the less favoured Cincinnati Reds.
Suddenly, the national pastime was a national scandal. Children felt betrayed, their parents were outraged and the team owners desperately sought some way to restore confidence in the game.
Simply put, the film is a winner. Eight Men Out, writer-director John Sayles's adaptation of Eliot Asinof’s best-selling dissection of the "Black Sox scandal," offers a humane, multi-faceted look at baseball's mythic moment of shame.
Throughout, the filmmaker's sympathies are with the players. Though the fix was organized by a disaffected first baseman — "You don't play the angles, you're a sap," says “Chick” Gandil (Michael Rooker) — Sayles makes it clear that this Chicago eight had real grievances.
Gandil, a former boxer, reasoned that professional gamblers would pay dearly for the chance to bet on a sure thing. After the Sox pennant victory, he took his proposition to Boston high-roller Joe "Sport" Sullivan (Kevin Tighe).
“You say you can find seven men on the best team ever to take the field to throw the World Series?" scoffs Sullivan. "I find that hard to believe."
"You've never played for Charlie Comiskey," counters Gandil.
Ah, yes, Charles Albert Comiskey (Clifton James), the self-styled "grand old man of baseball."
Sayles opens his film on the day of the Sox pennant win, showing us the opulent party the self-promoting "Commy" holds for the press and politically influential fans.
Beneath the stands, in the Sox dressing room, pitcher Eddie Cicotte (David Strathairn) steps forward to ask about the "victory bonus" promised the players.
"This is it,” says embarrassed team manager "Kid” Gleason (John Mahoney), motioning toward some bottles of flat champagne.
With economy and precision, Sayles introduces us to the shamelessly exploited champions. In for Gandil’s promised payday are pitchers Cicotte and "Lefty" Williams (James Read), shortstop "Swede" Risberg (Don Harvey) and fielders "Shoeless" Joe Jackson (D.B. Sweeney), "Hap" Felsch (Charlie Sheen) and Fred McMullin (Perry Lang).
Not included are pitcher Dickie Kerr (Jace Alexander), catcher "Cracker” Schalk (Gordon Clapp) nor second baseman Eddie Collins (Bill Irwin). Recruited, but wanting no part of the fix, is straight-arrow third baseman "Buck" Weaver (John Cusack), a man caught between loyalty to his teammates and his love of the game.
Besides offering a flawless evocation of a time and a place, Sayles, the socially-committed director of such films as Matewan and The Return of the Secaucus Seven, provides filmgoers with two distinct points of view.
In one instance, we see the scandal through the eyes of the knickerbockered young ones, the kids that hawk papers for the money to pay for bleacher seats, and who idolize the players. It's their pain that's summed up in the famous cry, "Say it ain't so, Joe!"
On another level, we can follow it along with the press corps, represented by newpaper legends Hugh Fullerton (Studs Terkel) and Ring Lardner (Sayles). Credited with breaking the original story, Fullerton covers the court case convinced that another kind of fix may be in place.
A brilliant combination of social history and sports nostalgia, Sayles’s feature is also an example of superb filmmaking.

Afterword: Well, that’s one version of the story. Until this year, baseball historian Eliot Asinof’s 1963 book Eight Men Out was the go-to account of the “Black Sox” affair. That changed in June, when a group called the Society for American Baseball Research published Scandal on the South Side: The 1919 Chicago White Sox. Edited by Jacob Pomrenke, who was interviewed  earlier this month on CBC Radio's The Sunday Edition, it is a forensic account of the year’s events that debunks many of the myths that have grown up around the game’s darkest hour.
Just to be clear, I’m no fan of pro sports. The Afterword to my review of director Roger Spottiswoode’s 1986 football comedy The Best of Times sets out my position on the subject. I argue that “the values promoted by pro sports are nakedly fascistic,” and modestly propose that we “disband the leagues, outlaw for-profit team ownership, and ban all pro sports forever.” That said, I kind of like baseball.
Despite having no interest at all in any commercial spectator sports (football a.k.a. soccer, American football, boxing, basketball, or hockey), I confess to having enjoyed many a minor league ball game from a seat in the bleachers of Vancouver’s Nat Bailey Stadium. No other sport has inspired as much literature, or as many writers and poets to celebrate its wonders. And, though there may be more movies about football out there, the ones about baseball are better. Trust me, I’m a critic.

Home run hits: Baseball-themed features currently in the Reeling Back archive include director Michael Ritchie’s 1976 Little League classic The Bad News Bears; Ron Shelton’s tale of life in the minors, Bull Durham (1988); and Penny Marshall’s celebration of women outstanding on the field, A League of Their Own (1992).