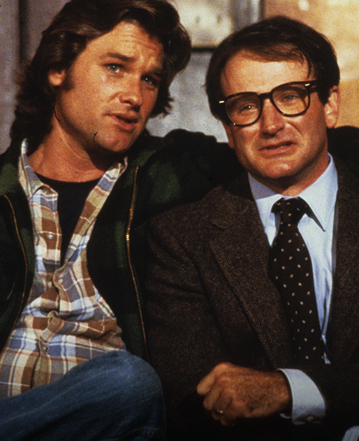 
It can be argued that moviemaking was in his blood. Roger Spottiswoode, born in Ottawa on this day (January 5) in 1945, is the son of cinema theorist Raymond Spottiswoode. Dad was one of the founding fathers of the National Film Board of Canada, and author of the pioneering 1935 book A Grammar of the Film: An Analysis of Film Technique. Raised in the U.K., Roger learned his craft in television, working as a documentary editor. In 1971, he was part of the team that cut Sam Peckinpah’s British-made feature Straw Dogs, and he relocated to Hollywood to work on the director’s Pat Garrett and Billy the Kid (1973). He returned to Canada during its era of tax-shelter pictures to make his own directorial debut with the 1980 slasher flick Terror Train. (And he keeps coming back, with six of his 19 theatrical features to date shot here.) He was soon recognized as a craftsman with a knack for choosing challenging projects and, in 1997, he was put in charge of Tomorrow Never Dies, the 18th “official” James Bond adventure. Roger Spottiswoode’s diverse interests show through in the four films being added to the Reeling Back archive today (with links to each following the Afterword to this posting). Demonstrating that not every play results in a touchdown, he was less than successful with a tale of an arrested adolescent’s sports obsession, the 1986 Robin Williams comedy The Best of Times.

THE BEST OF TIMES. Written by Ron Shelton. Music by Arthur B. Rubinstein. Directed by Roger Spottiswoode. Runing time: 103 minutes. Mature entertainment with the B.C. Classifier’s warning: some coarse language, swearing and suggestive scenes. JACK DUNDEE (ROBIN WILLIAMS) is a jerk. Thirteen years ago, he fumbled the ball in a high school football game, a clumsy moment that he broods about in every waking moment.
When he confesses his shame to town trollop Darla Robinson (Margaret Whitton) — “These are times when a man must look deep into the bowels of his soul," he moans piteously — she very sensibly suggests that he just replay the game and have done with it.
From that moment, Dundee dedicates himself to reassembling the 1972 Taft High School Rockets for a rematch with the Bakersfield Tigers. “This town is heading into the bowels of hell," he tells his wife Elly (Holly Palace), “and only a great victory can provide an enema for its soul."
The movie business is in trouble. In recent years, the studio production bosses have become so used to pandering to the "youth audience" that the process is now routine.
Remember [1985’s] Cocoon? In order to sell the product to teens, director Ron Howard's fountain-of-youth fantasy featured a group of senior citizens who use the gift of restored health to revert to adolescent behaviour patterns.
Howard's picture comforts young filmgoers with the idea that adults are nothing but physically enfeebled kids. In it, adult aspirations are reduced and trivialized into familiar teen obsessions,
It happens again in The Best of Times, an obnoxious attempt at comedy from director Roger (Under Fire) LINK Spottiswoode. In his least interesting role to date, comic Williams plays a small-town banker obsessed with football and sex (in that order).
As Dundee, he tries to convince good ol' boy Reno Hightower (Kurt Russell), “the greatest quarterback in the history of South Kern County,” to back his plan for a rematch. Though more interested in saving his marriage to former prom queen Gigi (Pamela Reed), Hightower is eventually drawn into Dundee's dimwitted little psycho-drama.
Russell, an actor who gives a professional performance every time out, does his best to infuse some humanity into his one-note role, but the effort is lost in the general tedium. Made to appeal to undemanding teens and arrested adolescents, The Best of Times makes an entirely predictable journey into the bowels of a jerk’s soul.

Afterword: I’ve always had something of a problem with sports. Yes, I know that getting out on the pitch, the diamond, the court, the field or the rink with other like-minded individuals builds character and promotes good health. We’re told that “the battle of Waterloo was won on the playing fields of Eton,” and the movies, such as The Best of Times, underscore the notion that American-style football has become something of a religion in that country. I know that I’m hardly alone in seeing the contradiction here, or being a little disturbed by those two bits of received wisdom: sport weaponized as training for war, and sport as an act of faith.
Obviously a distinction needs to be made. Sports, viewed as “physical education” and a part of growing up, are OK. I take no issue with the idea that playing games can be good for kids. But, to paraphrase 1 Corinthians 12:11, “When we are children, we play as children, we compete as children, we learn children's rules: but when we become men, we put away childish things.”
Professional sport — games played by adults for money — is the polar opposite of good. My younger brother, who spent a number of years as a Canadian Football League coach, once told me that pro sports only exist as an excuse for gambling. I’ve thought a lot about what he said back then, and I’ve yet to see anything positive in an industry that profits from professionalizing childish things. Team owners, an evil lot, are in a direct line of descent from the plantation-owning aristocrats of the Old South, while the athletes — assets that are bought, sold and traded at auction — are encouraged to abuse drugs and sustain life-altering injuries for the entertainment of the fans. Every year, billions of dollars in public funds are squandered in tax breaks and the construction of facilities to house “home” teams, all to enrich league executives.
Pro sport fans, of course, are the enablers. The fact that Superbowl Sunday™ has become an unofficial national holiday in the U.S. tells us a lot about the psycho-dymanics of life in 2018. As many thoughtful commentators have observed, the values promoted by pro sports are nakedly fascistic. So, what can we do about it?
My own modest proposal is that we just go cold turkey: disband the leagues, outlaw for-profit team ownership, and ban all pro sports forever. Sports would, in effect, be returned to the kids, who could enjoy them in the moment.