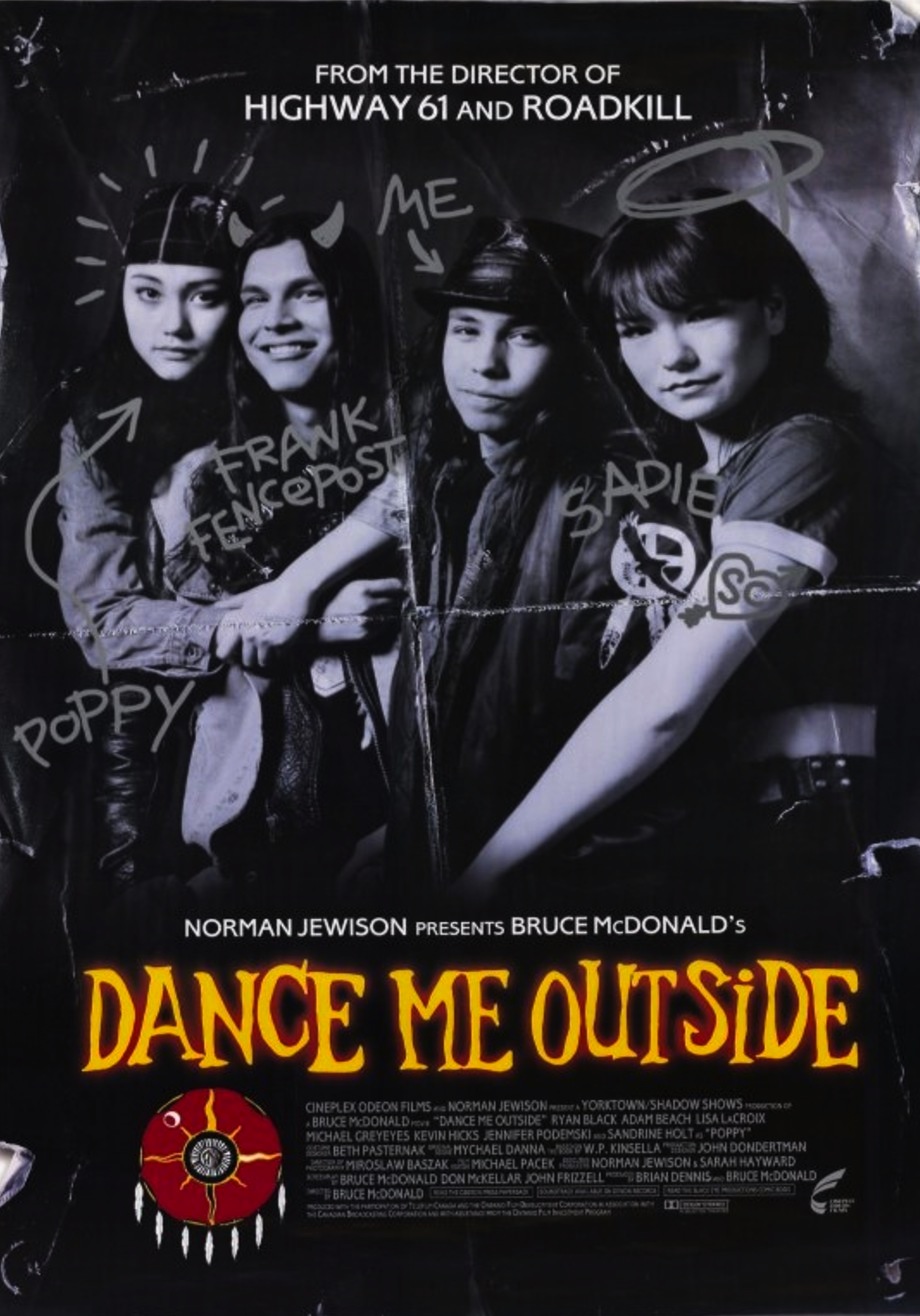 A First Nations generation growing wise is featured on the theatrical release poster for director Bruce McDonald's 1994 drama Dance Me Outside.


Not just growing up, but growing wise


First marked 20 years ago today (June 21), National Aboriginal Day was created "to recognize and celebrate the unique heritage, diverse cultures and outstanding contributions of First Nations, Inuit and Métis peoples." In the words of the federal department of Indigenous and Northern Affairs website, "the Government of Canada chose June 21, the summer solstice," because "for generations, many indigenous peoples . . . have celebrated their culture and heritage on or near this day due to the significance of the summer solstice as the longest day of the year." Which is a nice way of saying that, despite 400 years of policies designed to marginalize them, our native peoples are not going away. On the one hand, the annual observance is a positive step in the necessary process of redress and reconciliation. On the other, as broadcaster and activist Tom King pointed out in 2013, "it's not a national holiday," but one part of a multicultural package leading up to Canada Day (July 1). King, author of The Inconvenient Indian, argues that Victoria Day, a statutory holiday that's "lost its importance," should be repurposed as "First People's Day." Among the cinematic metaphors for the many ambiguities contained in the current National Aboriginal Day is director Bruce McDonald's powerful 1994 feature Dance Me Outside.

Tuesday, March 14, 1995.
DANCE ME OUTSIDE. Co-written by Don McKellar and John Frizzell. Based on the the 1977 short story collection by W.P. Kinsella. Music by Mychael Danna. Co-written, produced and directed by Bruce McDonald. Running time: 87 minutes. Mature with the B.C. Classifier's warning: some very coarse language, occasional violence and suggestive scenes. GET SERIOUS, EH?
There's not a lot of future in being a couple of First Nations Mackenzie brothers. In director Bruce McDonald's eye-opening Dance Me Outside, teenaged Silas Crow (Ryan Black) and his best buddy Frank Fencepost (Adam Beach) finally face up to the fact that there's more to life than beer and smokes.
It begins the weekend that Silas's sophisticated sister Illianna (Lisa LaCroix) comes home from Toronto with her new husband, bespectacled, non-native lawyer Robert McVey (Kevin Hicks). They're at the dance at the Blue Quill Hall, where she runs into her old boyfriend Gooch (Michael Greyeyes), who's just back from three years in prison.
He'd expected her to wait for him.
"We're not 17 any more," she says. Gooch, who's grown up a lot since his hell-raising days on Sucker Lake's Kidabanesee Reserve, is cool.
Not so Clarence Gaskill (Hugh Dillon), the local non-native sleazeball who leaves the dance with Little Margaret Wolfchild (Tamara Podemski). The next morning, Little Margaret's body is found down by the river.
The murder and the marriage set in motion the screenwriting team's almost casually told tale of alternative justice. Adapted by McDonald, Don McKellar and John Frizzel from W.P. Kinsella's 1977 short story collection, Dance Me Outside picks up the narrative one year later.
Because of her husband's low sperm count, Illianna has not been able to produce a grandchild for Ma Crow (Rose Marie Trudeau). Because of the vagaries of the Canadian criminal justice system, killer Gaskill is about to be released from prison after serving a ridiculously short sentence.
Says native rights activist Hobart Thunder (Vincent Andre Manitowabi) in a speech to the local folk: "It's time for the seventh-generation peoples to ask, 'Where's the justice in it all?' "
Moved by "it all," Silas becomes involved in two parallel conspiracies, both designed to redress imbalances caused by a white man's relationship with a reservation woman.
One — a lovingly intended scheme to distract McVey so that the virile Gooch can impregnate Illianna — is played for comedy. The other, vengeance for the murder, is biblically severe.
At long last, director McDonald is getting serious. Having wasted years (and several fistfuls of taxpayer-support dollars) on such self-indulgent "outlaw" features as Roadkill (1989) and Highway 61 (1991), the Toronto-based film-maker has actually made a movie worth the time it takes to sit through it.
Disciplined, perhaps, by the presence of a no-nonsense executive producer (Norman Jewison) and inspired by Kinsella's professionally crafted story line, he demonstrates a fine talent of his own. Maintaining a loose mood and an offhand manner, his contemporary youth drama delivers considerable cinematic substance.
A film about growing up and growing wise, Dance Me Outside is McDonald's finest work yet.

Afterword: Forests have been felled to provide paper for the countless books written about Canada's "founding nations," their conflicts and the "two solitudes" in which they live. Only recently, though, has it become clear that the English and the French were just the first immigrants, arriving in a land that had an indigenous population. By some estimates, there were as many as two million people living in what we now call Canada when, in June 1604, the French trader Pierre du Gua, Sieur de Monts came ashore on St. Croix Island, in what we now call the Bay of Fundy. Together with his 79-man crew, he established a settlement. "Whites want land," Tom King told us in his 2012 social history The Inconvenient Indian: A Curious Account of Native People in North America. "The issue that came ashore with the French and the English and the Spanish, the issue that was the raison d’être for each of the colonies, the issue that has made its way from coast to coast to coast and is with us today, is the issue of land. The issue has always been land.”
For 400 years, white folk have created the narrative, writing the histories, the novels and, eventually, the movies that told us how it was. That's now changing. "The 1992 Columbian quincentenary set into motion a reconsideration of the place of the Native American in our historical memory," the historians Peter C. Rollins and John E. O'Connor wrote in the introduction to their 1998 essay collection Hollywood's Indian: The Portrayal of the Native American in Film. Independent U.S. films, such as 1989's Powwow Highway, and the 1989 Canadian feature Where the Spirit Lives, blazed a trail for the big-budget Hollywood features, a cycle of titles that includes Dances with Wolves (1990), The Last of the Mohicans (1992), Thunderheart (1992) and Geronimo: An American Legend (1993). Canadian artists have been well represented in the creative shift, in part because of the existence since 1992 of the Aboriginal Peoples Television Network, a cable broadcaster based in Winnipeg, Manitoba. If the 20th annual National Aboriginal Day event is a celebration of works in progress, at least their direction is a positive one.

See also: In the Afterword to my review of 1995's animated Pocahontas, I noted that First Nations (Canadian) performers outnumber Native American actors in the movies by more than two to one, a stunning disparity given that the U.S. population is 10 times bigger than Canada's.
Other features with aboriginal themes in the Reeling Back archive include: Alien Thunder (1974); The Inbreaker (1974); The Wolfpen Principle (1974); Black Robe (1991); Incident at Oglala: The Leonard Peltier Story (1992); Shadow of the Wolf (1992); and Pocahontas: The Legend (1995).