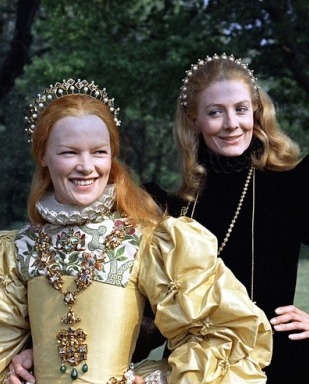 Glenda Jackson (as Elizabeth I) and Vanessa Redgrave (as Mary Stuart) are dressed to rule in a publicity photo for director Charles Jarrot’s 1971 historical drama Mary, Queen of Scots.


A woman first, and then a monarch


Oscar buzz is part of the marketing campaign for the independent British feature film Mary, Queen of Scots as it goes into release today (December 7). According to the oddsmakers, three-time nominee Saoirse Ronan, who plays the title role, is likely to be among the best actress contenders when the 91st Academy Awards are handed out on February 24, 2019. Her co-star, Margot Robbie, who has one previous nomination, is touted as supporting actress competitor for her work as Mary’s nemesis, England’s Queen Elizabeth. That the Brits should be inclined to revisit their tumultuous past is hardly surprising. They may even take comfort in it during the mess that their Brexit process has become. Less remarked upon is the fascination that American audiences have with tales of dynasty and royal prerogative. The nation’s egalitarian values would seem to be at odds with the divine rights claimed by those born to wealth and privilege. And yet Disney’s “magic kingdom” thrives, with a princess for every day of the week. The special burden of monarchy when the sovereign is a queen is central to the stories told in the three films being added to the Reeling Back archive this Friday (with links to each following the Afterword to this posting). In terms of plotting, the movie opening today appears to be a remake of director Charles Jarrot’s 1971 Elizabethan romp, a picture also titled Mary, Queen of Scots.

MARY, QUEEN OF SCOTS. Written by John Hale. Music by John Barry. Directed by Charles Jarrott. Running time: 128 minutes. THE ENGLISH — BLESS 'EM — have finally developed their very own movie genre. Dropping all pretence, they have turned the royal epic into a proper film subspecies governed by its own set of accepted quirks and conventions.
Although it must take its place among all the other genres (like horror films, westerns, science fiction and super-spy thrillers), the new entry remains uniquely English. Its heart is England's own turbulent history; its soul, the Power Game that only anointed princes could play.
The Game was regulated by complex codes of honour, rules of succession, family ties and religious convictions. It featured enough intrigue, passion, blood and battling to keep any mass audience enthralled.
Shakespeare knew that 400 years ago. The BBC, with a pair of multi-part historical sagas in successful international distribution, also knows that.
And so do the moviemakers. Charles Jarrot, the former TV director, assigned by Hal Wallis to his 1969 Tudor romance Anne of the Thousand Days, may never make a great film, but he's already a solid genre man.
His new feature, Mary, Queen of Scots, though historically inaccurate and visually unexciting, still manages to be a lot of fun.
Adversaries in the Game are two of the Reformation's most colourful queens, Elizabeth I of England and Mary Stuart, Queen of Scots. The queens are played by two of Britain's most interesting actresses, Glenda Jackson and Vanessa Redgrave.
Redgrave, herself a fiery political activist, plays Mary as a retiring, sensitive creature forced into the centre of conflicts she hardly understands and cannot control.
Her very existence is a threat to Elizabeth's throne and, in the shadow of the more powerful monarch, Mary blossoms into a genuine Scottish thistle, filled with fanatic determination to become a martyr.
Glenda Jackson, easily the most compelling actress on the screen today, has made the role of Elizabeth her own. "That monarch," her Elizabeth says of Mary, "is first a woman. This woman" she says of herself, "is first a monarch."
In a phrase she catches the essential tragedy of the two queens.
Shrewd, calculating and in control, it is Elizabeth who holds the reins of power. Jackson takes command of her character, and holds her audience as completely as Elizabeth held her court.
The ladies are performing in a story that might have been torn from the pages of a Classics Illustrated edition of Sexual Politics. Everyone from churchman John Knox (Robert James) on up is constantly practising his bawdy English.
In amongst the gunpowder plots, drugged drinks, stormings of the battlements and midnight flights, there is a syphilitic king, homosexual emissaries, doomed lovers and some pretty strong hints that Elizabeth, herself, was no virgin queen.
In the foreground are the various formal courtiers, a crew of solid British actors, all of whom are able to speak the scriptwriter's variations on Elizabethan English rapidly and with great clarity.
In the background is a sinister gang of Scottish lords. A shadowy lot of bearded, humourless nasties, they lurk about in leather and furs, ready to beat, stab or garrote a victim at a moment's notice.
Jarrot plays fast and loose with his history —a sure sign that his project is designed for an audience rather than the ages. His film may not be great art but he knows what we like.

Afterword: In 1972, it was hardly necessary to name the two BBC Tudor dramas on offer internationally. Its 1970 mini-series The Six Wives of Hernry VIII became a North American phenomenon when CBS broadcast it in 1972. Success breeds sequels and, fortunately for the Beeb, the much-married Henry left a daughter who became the subject of Elizabeth R (1971). Glenda Jackson, already an Oscar winner for her performance in the 1969 feature film Women in Love, added an Emmy to her honours when that second mini-series premiered on PBS’s Masterpiece Theatre. We’ll leave for another day the question of how the U.S. Public Broadcasting System, founded to promote non-commercial educational TV content, became so wedded to the anglophile worldview.
I don’t recall any Oscar buzz accompanying the release of 1971’s Mary, Queen of Scots. When the time came, though, it had five nominations, mostly for its look (in art & set direction, and costume design) and sound (for sound, and John Barry’s original dramatic score). Its star, Vanessa Redgrave was among the also-rans in the best actress category. Redgrave, who played Anne Boleyn (in 1966’s A Man for All Seasons) and Guinevere (Camelot; 1967), returned to the throne again in 2011, starring as Elizabeth I in Anonymous, the movie that argues that the Earl of Oxford wrote all those plays attributed to William Shakespeare.
Mary Stuart’s fate has fascinated filmmakers since the very beginning of the industry. Credited by historians as the first movie to use special effects is director Alfred Clark’s The Execution of Mary, Queen of Scots, released by the Edison Manufacturing Company on August 28, 1895. The 18-second epic shocked 19th-century viewers with the sight of an actress — Mrs. Robert L. Thomas — apparently beheaded (which, some say, makes it the world’s first exploitation picture).