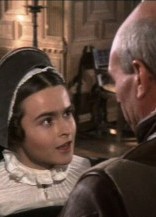 
Pity the daughter of a really bad dad


Oscar buzz is part of the marketing campaign for the independent British feature film Mary, Queen of Scots as it goes into release today (December 7). According to the oddsmakers, three-time nominee Saoirse Ronan, who plays the title role, is likely to be among the best actress contenders when the 91st Academy Awards are handed out on February 24, 2019. Her co-star, Margot Robbie, who has one previous nomination, is touted as supporting actress competitor for her work as Mary’s nemesis, England’s Queen Elizabeth. That the Brits should be inclined to revisit their tumultuous past is hardly surprising. They may even take comfort in it during the mess that their Brexit process has become. Less remarked upon is the fascination that American audiences have with tales of dynasty and royal prerogative. The nation’s egalitarian values would seem to be at odds with the divine rights claimed by those born to wealth and privilege. And yet Disney’s “magic kingdom” thrives, with a princess for every day of the week. The special burden of monarchy when the sovereign is a queen is central to the stories told in the three films being added to the Reeling Back archive this Friday (with links to each following the Afterword to this posting). In his 1986 historical romance, director Trevor Nunn crosses A Man for All Seasons with Romeo and Juliet to tell the tragic story of Lady Jane.

LADY JANE. Written by David Edgar, based on a story by Chris Bryant. Music by Stephen Oliver. Directed by Trevor Nunn. Running time: 143 minutes. Mature entertainment with the B.C. Classifier’s warning: occasional nudity. HER FATHER, HENRY GRAY, the Duke of Suffolk  (Patrick Stewart), is bowing and backing away. Her mother, the Duchess Frances (Sara Kestelman), is with him, glowering at her daughter, and urging that she follow them.
Between her parents, on the far wall of a chamber full of great lords and men-at-arms, she sees the empty throne.
"No!" she whispers to herself. "Wake me! Wake me! This is a nightmare."
It is July 10, 1553. To her horror, 15-year-old Jane Grey (Helena Bonham Carter), great-granddaughter of Henry VII, grand-niece of Henry VIII, designated successor to her cousin Edward VI (Warren Saire), is being proclaimed Queen.
Shy, studious and politically naive, Lady Jane has every right to be scared. In accepting the crown she is blocking the claim of Henry VIII’s eldest daughter, Mary the Princess of Wales (Jane Lapotaire), and setting off another round of civil strife in the already divided English realm.
Playwright William Shakespeare considered the story of  Lady Jane's nine-day reign too hot to handle. Though it contained all of his favourite dramatic elements, it remained politically dangerous for as long as he lived.
No fool, the bard always wrote histories that reflected well upon his royal patrons. He was not ashamed to be a Tudor propagandist. It was safer to vilify Richard III, lionize Henry V and legitimize Elizabeth I (in his 1613 play Henry VIII).
When director Trevor Nunn set about bringing Jane Grey's tragic tale to the screen, inflaming political passions was no longer a consideration. Together with screenwriter David Edgar, he concentrates on the romantic possibilities inherent in a story of ill-starred lovers.
It is a matter of historic record that Jane was forced to marry Guilford Dudley (Cary Elwes), the 17-year-old son of the Lord Protector, John Dudley (John Wood), Duke of Northumberland, seven weeks before her surprise coronation. She was, by ail accounts, an intensely religious young woman, and is said to have maintained her Protestant faith to the very end.
By developing these two themes — in effect crossing A Man for All Seasons with Romeo and Juliet — the filmmaker succeeds in producing a picture that should please both history buffs and historical romance fans. Drawing upon the acting resources of The Royal Shakespeare Company, Nunn makes the 16tth century come alive in all its deviously energetic glory.
Into this scrupulously accurate depiction of Tudor times, Nunn drops the entirely fictional tale of a perfect first love. He makes the historically antagonistic couple into a pair of marvellously modern teenagers who share a dream of a better world, and tells their personal story not as it was, but as we would have had it be.
Brave as well as talented, Nunn is gambling that the youthful audience will respond to his attractive young lovers, while older filmgoers enjoy his sumptuous, fair-minded recreation of a delicate moment in British history. If there remains a market for elegant, intelligent mass entertainment, his Lady Jane is sure to be a winner.

Afterword: I’ve never forgiven Patrick Stewart for his treatment of the then-19-year-old Helena Bonham Carter in Lady Jane. Yes, I know that it's utterly irrational to mistake the actor for the role, but he was just so good as the bad dad that to this day I suspect any character that he plays of harbouring some inner evil. Before his memorable turn as Henry Grey, Stewart had been a somewhat sinister supporting player in such films as 1981’s Excalibur, Dune (1984) and Lifeforce (1985 ).
Almost immediately after, he began a seven-season run as Jean-Luc Picard, captain of the Federation Starship Enterprise on TV's Star Trek: The Next Generation (1987-1994). Throughout, I feared for young Wesley Crusher, and suspected that Picard's alter-ego Locutus of Borg was closer to his true nature. Stewart went on to reprise his Picard character in four feature films, including 1994’s Star Trek Generations, Star Trek: First Contact (1996), Star Trek: Insurrection (1998) and Star Trek: Nemesis (2002). Earlier this year, it was announced that the 78-year-old actor will play Picard yet again in an as-yet untitled new Trek TV series scheduled for the autumn of 2019.
In real life, the man’s been a vocal advocate for abused women and children, lending his name to the campaigns of Amnesty International and a UK charity called Refuge. In 2010, Queen Elizabeth II honoured her loyal subject with a knighthood. By then, Sir Patrick was a wealthy man, having starred in seven of Marvel’s X-Men movies as Charles Francis Xavier (aka Professor X), founder  of the Xavier School for Gifted Youngsters. And here I am, after all these years, still creeped out by the idea that Henry Grey is in charge of a boarding school full of impressionable underage superheroes.