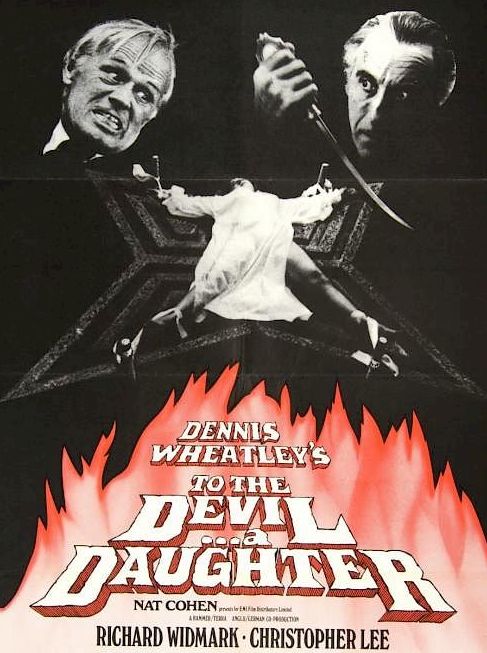 Stars Richard Widmark and Christopher Lee are pictured while novelist Dennis Wheatley is credited on the British poster for director Peter Sykes’s 1976 shock feature To the Devil, a Daughter.


Tepid take on an underground of evil


Theirs was an act of faith. On this day (November 18) in 1978, more than 900 members of the Peoples Temple Agriculture Project joined with their spiritual leader Jim Jones in an act of “revolutionary suicide.” Making the act particularly horrific was the fact that a third of the dead were children poisoned by their own parents, and the phrase “drinking the Kool-Aid” entered the language to describe the unquestioning acceptance of self-destructive beliefs. Called the Jonestown massacre, it is remembered alongside such historic mass suicides as Masada (in 133 BCE Palestine) and Matuba (1802, Guadeloupe). Shortly after Jonestown, sects such as Quebec’s Order of the Solar Temple and California’s Heaven’s Gate were in the headlines. Today, of course, religiously-inspired suicide is popularly believed to be a Muslim thing, a political act perpetrated by followers of “terrorist” organizations named Al-Qaeda (believed responsible for New York’s 9/11 event) or ISIS. Though self-slaughter falls well outside the teachings of mainstream religion, the practice holds a fascination for popular culture consumers. The power of cults and their beliefs are central to the plots of the four feature films being added to the Reeling Back archive today (with links to each following the Afterword to this posting). Worshipers of Satan help the angel-turned-demon become a dad in director Peter Sykes’s 1976 Hammer horror show To the Devil, a Daughter.

TO THE DEVIL, A DAUGHTER. Written by Chris Wicking, John Peacock and Gerald Vaughan-Hughes. Music by Paul Glass. Directed by Peter Sykes. Running time: 95 minutes. Restricted entertainment with the B.C. Classifier's warning: “gory and frightening scenes.” CHRISTOPHER LEE IS ONE actor who takes Satanism seriously. During an interview  last October [1975] — Lee was in Vancouver to play the title role in Tom Drake's period thriller, The Keeper — the sombre-voiced horror star described the film he had just finished in London as a "warning" to those casually involved with the Dark Arts.
People will be shocked, he said. It was a terrible, shocking movie but, he added, anything else would have been less than honest in a film designed to expose an underground of evil at work in the world today.
Given its high purpose, it almost seems insulting to call To the Devil, a Daughter a horror movie. Apparently, though, such purpose wasn't made clear to the film's distributors who are selling it as a mid-quality screamer.
In contrast with Lee, director Peter Sykes appears to have approached this particular project with mixed feelings. Sykes’s involvement with his material is limp and detached, with the result that his film lacks the kind of relentless gusto that makes The Omen [1976] a boxoffice bestseller.
While To the Devil, a Daughter may be short on the true screamer spirit, it has no lack of plot. The film opens with a heretical priest, Father Michael Rayner (Lee), being ceremonially excommunicated.
We flash forward to Bavaria, 20 years later. Rayner, still wearing his cassock and collar, is in charge of a convent. He is sending a young nun, Catherine Beddows (Nastassja Kinski) to meet her father in England.
At the same moment in London, Henry Beddows (Denholm Elliott) is crashing a press party for occult expert John Verney (Richard Widmark), author of a new book called The Devil Walks Among Us. Verney, the hero of the piece, seems to be screenwriter Chris Wicking's tribute to novelist Dennis Wheatley.
In an age of occult authors, Wheatley is probably the grand old man. Although the 1971 novel The Exorcist (by William Peter Blatty) and 1967’s Rosemary's Baby (Ira Levin) both found their way to the screen more quickly, Wheatley's To the Devil — a Daughter, first published in 1953, is the grand-mumsie of the lot.
As adapted here, it observes some of the more shopworn of horror-film conventions. When Verney finds that he is dealing with the followers of Astaroth, for example, he trots off to a friendly bishop for a look at an ancient grimoire.
Later, he will explain to a friend that “they baptize a baby in the blood of her dead mother. Then they bring her up in seclusion, then baptize her again as the devil.” To Varney goes the task of saving Catherine, Rayner’s intended victim.
There is no denying the basic efficiency of the Hammer horror film factory. Even through the layered complexity of an international co-production, there is a satisfying slickness to the look and brisk pace to the story development.
The performers, a group that includes Honor Blackman (as Verney's brittle, non-believing literary agent), all give their best.
Only director Sykes is seriously out of step. He is reluctant to come to grips fully with what Lee recognized as the truly shocking nature of the film's plot.
It is probably impossible to be both decorous and honest when a storyline insists on the existence of rites that require babes to be ripped from the wombs of their screaming mothers, of demonic rape or of murderous ghosts. It is hard to maintain a tasteful mien when your horrific highlight is a reverse birth, a nightmare in which the devil's own fetus forces its way up the virginal heroine's birth canal.
Low-key to the point of understatement, To the Devil, a Daughter makes every effort to be bland and inoffensive. It is no compliment to Sykes to say that he comes near to succeeding.
*    *    *
GRIM EXPECTATIONS: We knew that the devil takes an interest in children (described in 1973’s The Exorcist), and that he has something of a sex life (depicted in 1968’s Rosemary's Baby) but, during the last few years, he's really been running himself ragged.
Although his plans miscarry in The Antichrist (1974), they come to term in The Devil Within Her (1975). If you add the results of 1976’s The Omen and consider the possibilities hinted at in To the Devil, a Daughter, you can imagine a considerable thunder of little hooves around Hell.

Afterword: Though hardly a major motion picture, To the Devil, a Daughter foreshadowed  the "moral panic" that gripped American society (and generated endless tabloid headlines) in the 1980s. Concern over ritual abuse of children by devil worshippers followed the publication of a book called Michelle Remembers (1980), co-written by Michelle Smith and her husband Lawrence Pazder. In it, they alleged that Smith was the victim of abuse by Satanists during her childhood in Victoria, B.C. In 1984, in what became known as the McMartin preschool scandal, the Los Angeles district attorney brought charges against seven people accused of abusing children in their care. Coverage of the case fanned the flames of public concern on the subject of recovered memories, and over the idea of an international conspiracy of evil.
The McMartin case went on for six years and resulted in no convictions. All charges were dropped in 1990. The fact that Michelle Remembers co-author Lawrence Pazder was a practicing psychiatrist gave his book an initial credibility. It was soon debunked, though, by investigative reporters (including my old Toronto Telegram colleague Paul Grescoe). Pazder recanted the charge that five-year-old Michelle had been abused in 1955 by “the Church of Satan” when its founder, Anton LaVey, threatened a libel suit.
And, yes, there is a Church of Satan. Based in San Francisco, it was founded on April 30 (also known as Walpurgisnacht) in 1966. One of many movements born in the fever dream that was the 1960s, it preached an “atheistic Satanism,” and took as its text LeVey’s The Satanic Bible (1969). It survived the panic of the 1980s and exists to this day. Because it’s now the 21st century, The Church of Satan has a website.