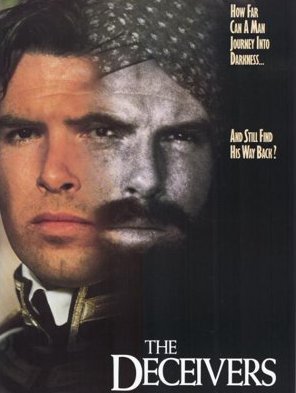 The theatrical release poster features Pierce Brosnan in his role as a British officer and undercover Thug in director Nicolas Meyer’s 1988 adventure The Deceivers.

Those who kill for Kali


Theirs was an act of faith. On this day (November 18) in 1978, more than 900 members of the Peoples Temple Agriculture Project joined with their spiritual leader Jim Jones in an act of “revolutionary suicide.” Making the act particularly horrific was the fact that a third of the dead were children poisoned by their own parents, and the phrase “drinking the Kool-Aid” entered the language to describe the unquestioning acceptance of self-destructive beliefs. Called the Jonestown massacre, it is remembered alongside such historic mass suicides as Masada (in 133 BCE Palestine) and Matuba (1802, Guadeloupe). Shortly after Jonestown, sects such as Quebec’s Order of the Solar Temple and California’s Heaven’s Gate were in the headlines. Today, of course, religiously-inspired suicide is popularly believed to be a Muslim thing, a political act perpetrated by followers of “terrorist” organizations named Al-Qaeda (believed responsible for New York’s 9/11 event) or ISIS. Though self-slaughter falls well outside the teachings of mainstream religion, the practice holds a fascination for popular culture consumers. The power of cults and their beliefs are central to the plots of the four feature films being added to the Reeling Back archive today (with links to each following the Afterword to this posting). Thuggee killers in the service of the Hindu goddess Kali cause a spot of bother for India’s British administrators in director Nicholas Meyer’s 1988 period piece The Deceivers.

Wednesday, October 19, 1988
THE DECEIVERS. Written by Michael Hirst. Based on the 1952 novel by John Masters. Music by John Scott. Directed by Nicholas Meyer. Running time: 102 minutes. Rated Mature with the B.C. Classifier’s warning: “some violence, occasional suggestive scenes.” COLONEL WILSON (KEITH MICHELL) is not convinced. A cult of killers running loose in 1825's British India? Unthinkable!
Captain Savage (Pierce Brosnan) exceeded his authority. “You discover a few men murdered by bandits and turn it into the biggest conspiracy in history," the colonel fumes.
He'd like to believe the lad’s story. Not only is William Savage his ablest officer, but his newly acquired son-in-law.
Unfortunately, Savage's investigation into this Thuggee business has been most irregular. Confound it, the British East India Company has regulations and procedures that must be observed if the rule of law is to obtain.
The Deceivers is not convincing. In attempting to bring John Masters' 1952 novel of pre-Raj India to the screen, director Nicholas Meyer's grasp exceeds his dramatic reach.
It's a story that would have worked as straight adventure. Masters based his book on the real-life exploits of William Sleeman, the British officer who penetrated India's Thuggee (or "Deceiver") brotherhood.
In Michael Hirst’s screenplay, Captain Savage is the brave Englishman. When relieved of his command by the colonel, he takes the identity of Gopal, a local weaver, and sets out to build an irrefutable case against the sect which robs and kills in the service of the Hindu goddess Kali.
Leaving his new bride Sarah (Helena Michell), Savage takes to the road with Hussein (Saeed Jaffrey), a Thug who has allied himself with the relentless Briton. “Hunting” with the band controlled by the leader Feringea (Tariq Yunus), he begins to understand the meaning of Hussein's words, "to serve (Kali) is to know ecstasy.”
Meyer does not lack ambition. No simple remake of Terence Fisher's 1960 thriller Stranglers of Bombay, his film attempts something akin to psychodrama. Like Michael Mann's stylish Manhunter (1986), Meyer tells the story of a crimefighter who adopts the mindset of the criminals he is pursuing.
Unlike Mann, he is unable to make his hero's inner struggle ring true.
Part of the fault is with Brosnan, an actor who never disappears into either aspect of his complex role. His undercover identity as Gopal is impossible to take seriously.
Most of the problem, though, is with a screenplay that relies on superficial imagery and action-film clichés to carry its message. The deeper questions of cultural identity and its inquiry into the meaning of a society “older than time and just as mysterious”  merely muddle the mix.
The Deceivers ends up as a failed attempt to combine Kiplingesque thrills with Forster-like insight.

Afterword: As a rule, I really like a Nicholas Meyer movie. Although, in the words of the old cliché, he always wanted to direct, he first gained fame as a writer. In 1974, his best-selling Sherlock Holmes novel, The Seven-Per-Cent Solution, noted that athletes were not the only ones who used performance-enhancing drugs. Two years later, Meyer provided director Herbert Ross with the screenplay for the movie version, and earned an Oscar nomination for his trouble. He leveraged that success into his first directorial assignment, the cheerful 1979 fantasy Time After Time, the first American steampunk film. In it, Jack the Ripper commandeers H.G. Wells’s time machine to escape into modern San Francisco.
I liked both of his contributions to the Star Trek franchise — 1982’s Star Trek II: The Wrath of Kahn, and Star Trek VI: The Undiscovered Country (1991) — and his piquant cold war comedy Company Business (1991), a picture that paired Gene Hackman and Mikhail Baryshnikov as unlikely allies. Since all of those pictures involved Meyer as writer-director, could it be that The Deceivers misfired because he was not the author of the screenplay?
But wait. My favourite Meyer feature has to be his timeless bridge-building comedy Volunteers, in which Tom Hanks stars as an unlikely Peace Corps worker who finds love and political enlightenment in rural Thailand. Actually, the 1985 satire is among my favourite movies, period. And, in common with The Deceivers, it was not written by its director. So, let me try a different theory. The Deceivers misfired because neither Rudyard Kiplingesque thrills nor E.M. Forster-like insight are compatible with Meyer’s greatest strength, the ability to find the wry humour in almost every situation. Death cults just aren’t funny.