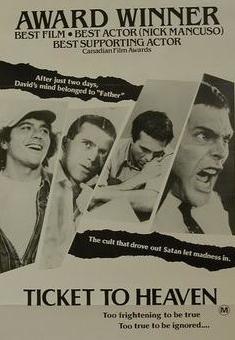 In Canada, Genie Award honours were emphasized on the posters for director Ralph L. Thomas’s 1981 deprogramming drama Ticket to Heaven.

Wrestling with a monster


Cult addiction a crisis of our times


Theirs was an act of faith. On this day (November 18) in 1978, more than 900 members of the Peoples Temple Agriculture Project joined with their spiritual leader Jim Jones in an act of “revolutionary suicide.” Making the act particularly horrific was the fact that a third of the dead were children poisoned by their own parents, and the phrase “drinking the Kool-Aid” entered the language to describe the unquestioning acceptance of self-destructive beliefs. Called the Jonestown massacre, it is remembered alongside such historic mass suicides as Masada (in 133 BCE Palestine) and Matuba (1802, Guadeloupe). Shortly after Jonestown, sects such as Quebec’s Order of the Solar Temple and California’s Heaven’s Gate were in the headlines. Today, of course, religiously-inspired suicide is popularly believed to be a Muslim thing, a political act perpetrated by followers of “terrorist” organizations named Al-Qaeda (believed responsible for New York’s 9/11 event) or ISIS. Though self-slaughter falls well outside the teachings of mainstream religion, the practice holds a fascination for popular culture consumers. The power of cults and their beliefs are central to the plots of the four feature films being added to the Reeling Back archive today (with links to each following the Afterword to this posting). Canadian director Ralph L. Thomas offers a serious look into the mind of an urban street-cult believer in his 1981 drama Ticket to Heaven.

TICKET TO HEAVEN. Co-written by Anne Cameron. Based on the 1980 book Moonwebs: Journey into the Mind of a Cult by Josh Freed. Music by Micky Erbe and Maribeth Solomon. Co-written and directed by Ralph L. Thomas. Rated Mature with the B.C. Classifier’s warning: “occasional very coarse language.” DAVID KAPPEL (NICK MANCUSO) is hooked. Although he doesn't understand how or quite know why, he is totally committed to a mind-numbing love, to an all-knowing Father, to his divine fix.
It didn't come easily. He had to wrestle with the Satanic forces within himself, to confess his sinfulness, to face up to his own worthlessness, to lose himself in Father and the family.
He has conquered his lust and learned to love. He lives the creed — “bring in the money; stay awake; smash out Satan" — and he has earned his Ticket to Heaven.
Now, with inner peace within his grasp, David is to be tested. Satan's multiple manifestations — his mother Esther (Marcia Diamond), his father Morley (Paul Soles), Larry (Saul Rubinek), the man who was once his best friend, and Sarah (Dixie Seatle), the woman who tempted him into carnal connection — and Satan himself have stolen him away from his family, locked him in a bare room and are attempting to shake his faith in the new messiah.
Satan recognizes his strength. “He's tough and he's smart,” says Linc Strunc (R.H. Thomson), a former cult member turned professional deprogrammer. “It's like trying to start a Cadillac that's been sitting for five years,”
I'm tempted to call Ticket to Heaven an important movie. After seeing it, one mother of three school-age children said “it should be shown in all the schools.”
Said another: “It’s like showing a movie on VD. It's not pleasant but they need to know.”
The trouble with important movies is that they tend to be ignored.  Les Ordres, Michel Brault's 1974 Québec crisis film, was important. Everybody said so. It died at the box office because everybody was off seeing Jaws the summer that it came to town.
The street corner religious cults — Moonies, Process, Children of God, Krishnas — have been with us for some time now. In the year that Les Ordres was released, Rolling Stone magazine commissioned Vancouver comic artist Rand Holmes to comment on the phenomenon.
Holmes's offering was called "Spiritual Hamburgers”. It introduced a counter-culture burn-out case, Osgood Snaid, a kid who "is definitely ripe for . . . a new religion!”
Hearing a catchy jingle — “You deserve a break today, why not throw your mind away . . .” —  Osgood checks out the menu at MaHarjJi’s. “Wow!" he says, “free peace of mind. All I have to do is give everything I own to that little fat kid and spend the rest of my life workin’ my ass off so he can indulge his tastes in fast cars and stereo equipment.”
In Ticket to Heaven, writer-director Ralph Thomas applies an artist's instinct as sharp as that of Holmes. Managing to turn an important topic into solid screen entertainment, he has produced a film that is by turns fast, funny and thoroughly frightening.
His film introduces us to a cult called The Heavenly Children, and details how it helps its converts throw their minds away. David, a Toronto schoolteacher on the rebound from an unhappy love affair, goes on vacation to San Francisco, where he hopes to share a few laughs with his old friend Karl (Stephen Markle).
As it turns out, Karl has something else to share.
Why not spend a weekend in the country? Hoping to make it with Ruthie (Kim Cattrall), a vivacious bundle of beautiful energy, David accepts.
Ruthie, once a teacher herself, is one of Father's most effective agents.
Based on Montreal journalist Josh Freed’s 1980 book, Moonwebs: Journey into the Mind of a Cult, Thomas’s Ticket to Heaven chronicles David’s conversion and subsequent efforts by his real family and friends to restore his mind and will.
We see David become a zombie for Father, a self-proclaimed messiah from southeast Asia whose striking resemblance to Korean arms merchant-cum-guru Sun Myung Moon is, of course, purely coincidental.
The focus of the film then shifts to his best friend, Larry, a would-be stand-up comedian whose sense of humour becomes a weapon against the cult’s otherwise effective brainwashing techniques. Together with Eric (Guy Boyd), a good old boy who once survived solitary confinement in a southern prison, he escapes to set up David's deprogramming.
Few human dramas are more powerful than the moment when an addict confronts his addiction. Frank Sinatra earned an Oscar nomination for playing a junkie who goes cold turkey in 1955’s The Man With the Golden Arm. Jack Lemmon won the Academy Award for his epic battle with the bottle in 1962’s Days of Wine and Roses.
Now, Nick Mancuso wrestles with the monster that has replaced David Kappel’s mind. Perhaps he, too, will pick up an Academy Award nomination for his riveting portrayal.
Actually, it’s a bit unfair to single him out for special praise. Mancuso — currently [1981] working in Vancouver opposite actor-director Charlton Heston on his Mother Lode project — is part of a finely-tuned ensemble. Virtually everyone involved in this perfectly cast picture deserves recognition for a job well done.
A daring and different film thriller, Ticket to Heaven is a gripping exposé of some of the sinister forces infesting our streets.

Afterword: I was wrong about the Academy Awards, whose members failed to take note of Ticket to Heaven’s value. But the New York-based National Board of Review did, including it among its Top Ten Films of 1981. On its home turf, the Academy of Canadian Cinema  & Television showered the picture with 14 Genie Award nominations. Its four wins included Best Motion Picture, Actor (Nick Mancuso), Supporting Actor (Saul Rubinek) and Editing (Ron Wiseman).
Ralph L. Thomas, who was nominated for direction and screenplay Genies, was no stranger to issues of faith. Born in Brazil, he was the son of Canadian Baptist missionaries sent to preach the gospel in a foreign land. Growing up, he attended Alberta’s Prairie Bible Institute High and the Toronto Bible College. In 1963, he went to work for the Toronto Star as an entertainment writer. In 1968, he moved on to a job with the CBC as a story editor, where he was involved in the production of such documentaries as 1972’s The Bible Belt: The Politics of the Second Coming and Thy Kingdom Come: The Politics of Salvation. Thomas made his feature film debut in 1978, directing Tyler, a story of generational conflict within a rural Ontario farm family, following that with the much honoured Ticket to Heaven.
For personal reasons that I explain in the Afterword to my review, I was less impressed with his 1983 biographical drama The Terry Fox Story. I never saw his 1988 feature, a return to the subject of cult belief called Apprentice to Murder, but found a lot to like about 1989’s The First Season, his made-in-B.C. tale of a widow who works to save her family’s fishing business. Thomas directed his last feature in 1992, and appears to have been in retirement since about 2000.