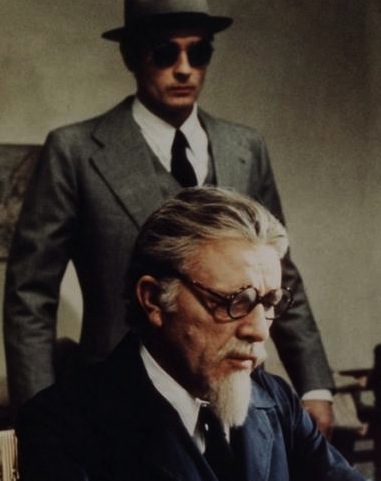 There will be no clean kill as Jacson (Alain Delon) stalks his prey, the revolutionary exile Leon Trotsky (Richard Burton), in Joseph Losey's The Assassination of Trotsky.

Bull, but not a prime cut


Worlds away from the Winter Palace


According to Bill Cain's 2009 play Equivocation (currently being staged by Vancouver's Bard on the Beach), Shakespeare once refused a commission to write a play about the Gunpowder Plot. He resisted it, because the 1605 attempt to kill James I was foiled, and therefore lacked a dramatic ending. In the matter of political assassination, The Bard preferred examining such historical events as the death of Julius Caesar, a classic tragedy that has been the subject of a dozen feature film and TV adaptations since 1914. Filmmakers hardly need to look back that far for their inspiration, though. Movies recalling the events of November 22, 1963 have become a sub-genre ever since David Miller's Executive Action (1973) first questioned the Warren commission's lone-gunman verdict. John F. Kennedy's death may be the most examined political murder, but it's not the only one. Mark Robson's 1963 feature Nine Hours to Rama (1963) focused on the Hindu activist who shot Mahatma Gandhi, while Year of the Gun, a 1991 John Frankenheimer thriller, recalled the killing of Italy's Prime Minister Aldo Moro. Steven Spielberg examined Israel's policy of targeted assassinations in Munich (2005), while the recent execution of Osama bin Laden was celebrated in Kathryn Bigelow's Zero Dark 30 (2012). This day (August 20) in 1940 is recalled in Joseph Losey's 1972 feature, The Assassination of Trotsky

Monday, November 27, 1972.
THE ASSASSINATION OF TROTSKY. Written by Nicholas Mosley. Music by Egisto Macchi. Directed by Joseph Losey. Running time: 103 minutes. Mature entertainment with the B.C. Classifier's warning: scenes of excessive brutality. THE LAST TIME RICHARD Burton showed up in town, he was wearing a thick blue beard and playing the part of an Austrian fascist. He was half-heartedly slogging through the title role in the doughy comedy Bluebeard [1972].
This week, he's on view in a wispy white beard. It's the sonorous Welshman's major concession to his current role, that of Leon Trotsky, and it's nowhere near enough to save this uninteresting film from enervating even a politically-minded audience.
Unlike Bluebeard, Trotsky is considered something of a hero. Born Lev Davidovich Bronshtein, he was one of the original Bolsheviks, equal in importance to Lenin during the revolutionary period in Russia. He founded the Red Army, and guided it to victory during the Civil War that followed.
An internationalist, Trotsky ran afoul of Stalin after Lenin's death, and was rapidly demoted into a wandering exile. In 1940, he was living in a heavily guarded house in Mexico City. It was there that Stalinist agents allegedly arranged for his assassination.
Director Joseph Losey, who has worked with the Burtons as a team (Boom; 1968) and with Mrs. Burton [Elizabeth Taylor] as a single (Secret Ceremony; 1968), assumes his audiences will be politically sophisticated. He assumes they will know who Trotsky was, what he stood for, and why he was in conflict with the Soviet dictator Stalin.
Such assumptions absolve him from having to explain any of this in his film and, to a large extent, absolves his actors from having to work any harder than the mannequins in a stylized historical pageant. It allows Losey the pretence of being an artist without demonstrating any skill as a communicator.
His film opens in Mexico City on May Day, 1940. Under the surveillance of the local police, various left-wing groups are on parade, with Trotskyites eventually coming into conflict with the Stalinists.
While this is going on, a moody Spaniard named Jacson (Alain Delon), an enigmatic figure who claims to be a Belgian but is traveling on a Canadian passport, is enjoying an explosive tryst with Gita (Romy Schneider), a member of Trotsky's secretarial entourage.
Jacson is a none-too-stable individual, but he is definitely in the know. In a series of meetings with a mysterious stranger (always held beneath message-laden murals, on church roofs or in bell towers), he gets the latest news bulletins from the anti-Trotsky forces. In the process, he is set up to do the violent deed promised in the film's title.
Trotsky is introduced as a brooding old man surrounded by greying followers, guards, and the recorded sound of his own voice. He has become tired, and is given to telling his young partisans that "you should have been with us when we stormed the Winter Palace."
(The real Trotsky was actually several miles from the centre of Petrograd when Bolshevik forces laid siege to the Winter Palace. Together with Lenin, he was secreted away in an upper room of the Smolny Institute, co-ordinating the many elements of the October Revolution.)
When an armed attack on the old revolutionary's compound fails to kill him, Jacson readies himself for the task. He does so by going to a bullfight, an event that provides the film's central image (and the major bit of brutality referred to in the B.C. Classifier's warning).
It's not a very good bullfight. The matador is an inept youngster who is, at first, thrown by the bull. Later, he loses his sword in the beast's back. There is no "moment of truth," no clean kill. As Jacson watches, the bull reels around the arena, the blade deep in his flesh, vomiting blood.
Later, director Losey elbows his audience in the ribs, intercutting flashes of the wounded bull into a scene of a wheezing Trotsky. The old bull — get it? — is going to be cut down with an ice axe. Blood, people. Wait for it.
It's bull, all right. Unfortunately, it's not exactly prime cut.
Three years ago, Constantine Costa-Gavras proved that it was possible to make a political thriller without sacrificing excitement, understanding or entertainment. His 1969 feature Z told its own story, and was outstanding cinema whether or not the viewer had a background in modern Greek politics.
Depite his pretentions, Losey has no such skill. His principals, including Delon's glassy-eyed Jacson, Schneider's hysterical Gita and Burton's pompous Trotsky, have no more depth than the director's symbolic bullfight. Neither the mind of the killer nor that of his victim comes into focus, with the result that The Assassination of Trotsky is never more than a flat, dull film.

Afterword: Wisconsin-born Joseph Losey was no stranger to political exile. He arrived in Los Angeles just after the Second World War, having made his reputation as a Depression-era New York theatre director commited to social change. In 1951, with five Hollywood pictures to his credit, Losey ran afoul of the House Un-American Activities Committee in its relentless pursuit of entertainment industry Communists. Blacklisted, he relocated to Europe, where he became an honoured American expat working in the British, Italian and French film industries. Shot on location in Rome and Mexico City, The Assassination of Trotsky was the 19th (and far from the best) of his 27 European features. Between 1962 and 1980, he earned a basketful of high profile European award nominations and wins. The U.S. Academy of Motion Picture Arts and Sciences, by contrast, never heard of him.

See also: Available for your reading pleasure are my reviews of films about historical assassinations, including the made-for-TV feature Killing Kennedy (2013); Oliver Stone's much-honoured JFK  (1991); the controversial Executive Action (1973); the "truthiness" told in Ruby (1992); and the real-life tragedy of Romero (1989). Not based on true stories are the assassination attempts by government killers in Apocalypse Now (1979), and Russian Roulette (1975).