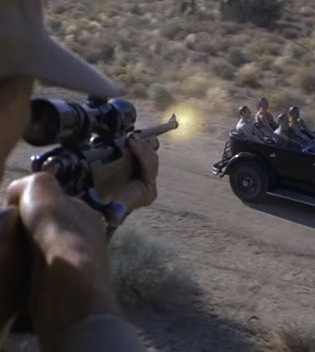 Practice makes perfect in Executive Action, in which a team of assassins prepare well in advance of their assignment in Dallas, Texas.

Death in Dallas, day one


Fired 50 years ago today (Nov. 22), they were the shots heard down the years. To this day their number and source remain matters of dispute. Their result, the death of the 35th President of the United States, left its mark upon a generation. John Fitzgerald Kennedy was not the first president to be assassinated, but he was the first in an age of mass media. The world (and the world of film), has shared the shock, the grief and the questions about the event ever since. Originally the subject of documentary — Four Days in November (1964), Years of Lightning, Day of Drums (1965), Rush to Judgment (1966) — that day in Dallas would eventually be taken up by fictional filmmakers. Over the next three days, Reeling Back will recall six features and the emotions they stirred. We begin with the 1973 conspiracy thriller Executive Action and director Oliver Stone's unsparing investigative drama JFK (1991). Tomorrow, we'll continue with Love Field (1993) and Ruby (1992), finishing up on Sunday with Flashpoint (1984) and Winter Kills (1979).

Thursday, November 22, 1973
EXECUTIVE ACTION. Written by Dalton Trumbo, based on a story by Donald Freed and Mark Lane. Music by Randy Edelman. Directed by David Miller. Running time: 91 minutes. General entertainment. FIRST, NUMBNESS.
I remember that day with hollow, painful clarity.
So do you. So does everyone.
Ask around the room. "Where were you on Friday, November 22, 1963?"
We remember because, unlike so many historical tragedies, the murder of John Fitzgerald Kennedy touched us all. As David Frost said a  matter of hours later on the BBC, "death has become immediate to people all over the world." The loss was somehow personal to every one of us.
Ten years and a day later comes Executive Action, a film that tears at the unhealed wound, clawing at it until it opens, until the blood flows and the pain returns undiminished. The event, rather than the film, numbs the senses, making it difficult to know quite how to review the film. Ask me questions.
What is it?
A conspiracy theory — remember all the conspiracy theories? — acted out.   A small group of rich and powerful men, personifications of the military-industrial complex,  fear that the Kennedy family, together with their liberal coalition — intellectuals, the young, the blacks and the press — will become a presidential dynasty.
Specifically, they fear Kennedy will not oppose, but rather lead the black revolution, that he will negotiate a test ban treaty with the Russians and that he will withdraw U.S. forces from Vietnam. To stop him, they decide to take extra-legal "executive" action.
Who thought it up?
Dalton Trumbo, who was once blacklisted by Hollywood's ultra-Americans, wrote the script. It's based on a story by Mark Lane, author of one of the original conspiracy theory books, Rush to Judgment.

Afterword: It's obvious from the tone of the above review that the first American movie to seriously challenge the Warren Commission's conclusion (that the accused assassin Lee Harvey Oswald had acted alone) hit me like the proverbial ton of bricks. While I recognized that cinematically the film was no great shakes, I found the story emotionally overwhelming. I am reminded of how much the teen-aged me had invested in the charismatic Kennedy's presidency. Another 18 years later, when I reviewed Oliver Stone's polished, persuasive conspiracy epic JFK, I discovered that nerves were raw enough to call forth new tears. For the record, I was between classes and leaning over a drinking fountain in the halls of Toronto's York Memorial Collegiate when I heard someone behind me say "President Kennedy's been shot."