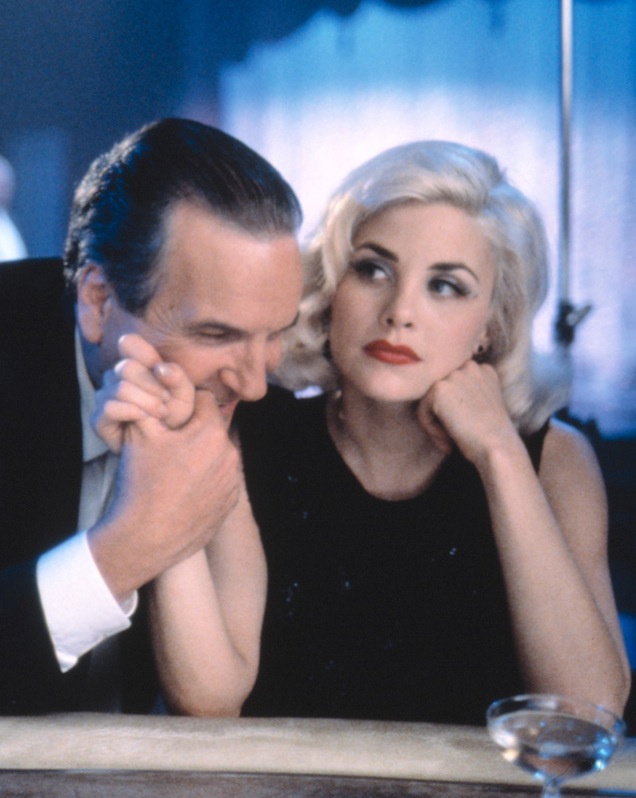 
Fired 50 years ago, they were the shots heard down the years. To this day their number and source remain matters of dispute. Their result, the death of the 35th President of the United States, left its mark upon a generation. John Fitzgerald Kennedy was not the first president to be assassinated, but he was the first in an age of mass media. The world (and the movie world), has shared the shock, the grief and the questions about the event ever since. Originally the subject of documentary, the story of that day in Dallas were eventually taken up by fictional filmmakers, whose creations would rekindle powerful feelings of anger and loss. Yesterday, Reeling Back looked at the 1973 conspiracy thriller Executive Action and Oliver Stone's "counter-myth" JFK (1991). Today, we continue with Ruby, the 1992 drama that views the story through the eyes of Lee Harvey Oswald's killer, Jack Ruby, and Love Field (1993), a tale of two strangers bound together by the tragedy. We'll finish up tomorrow, with 1984's second-gun thriller Flashpoint and the darkly comic Winter Kills (1979).

Wednesday, March 25, 1992.
RUBY. Written by Stephen Davis, based on his play Love Field (1987). Music by John Scott. Directed by John Mackenzie. Running time: 100 minutes. Rated Mature with the B.C. Classifier's warning "some violence and very coarse language, occasional nudity." PSSST, BUDDY! Seen JFK yet?
Yeah? Well now, have I got a conspiracy theory for you.
Remember Ruby, the guy that did Oswald? Jack Ruby. Born Jack Rubenstein. Known to his Chicago mobster buddies as "Sparky".
Also known as the owner of the Carousel Club, a low-rent strip joint in downtown Dallas, Texas. Ruby was there when it all happened, and he knew more than he was telling.
Listen. There's, like, truth and then there's The Truth. Go to a movie like Oliver Stone's JFK (1991) and you get the first kind.
Stone is into facts, heavy emotions, big stars and deep thinking. His kind of truth makes you think until your brain hurts.
A movie like Winter Kills, William Richert's 1979 adaptation of the Richard Condon novel, retails the other kind. Total fiction, it leaves you breathless because, after seeing it, you know things none of us were ever meant to know.
British director John Mackenzie's Ruby is the sort of movie that sits in between. Based on Stephen Davis's 1987 London stage play Love Field, it deals in an after-hours kind of truth.
It begins with Ruby (Danny Aiello) telling us that "this is the best sense I can make of it." The time is 1962.
In Chicago, minor mafioso Action Jackson (Frank Orsatti) is being tortured to death. In Rising Star, Texas, attractive young Sheryl Ann Dujean (Sherilyn Fenn) is leaving her abusive husband.
Meeting Ruby in the Dallas bus terminal, Dujean accepts the hospitality of his Carousel Club. Renamed Candy Cane, she is soon its star attraction.
When the Mob sends Ruby to Havana to do a "little job," Candy tags along. Later, they travel together to Las Vegas, where FBI informant Ruby wears a wire to a Syndicate summit meeting.
The same evening, while the pretty stripper is entertaining JFK (Gerard David) in the presidential suite, a CIA agent pseudo-named Maxwell (Arliss Howard) takes Ruby for a ride in the desert.
With B-movie-maker bravado, Mackenzie blends fact with fiction. We know that Ruby, Kennedy, Sam Giancana (Carmine Caridi) and Lee Harvey Oswald (Willie Garson) all existed.
Characters like Maxwell and Candy Cane (identified in press notes as "an amalgam of several different strip queens Ruby knew") are used to fill in the blanks. Mackenzie's style is to offer the truth if necessary, but not necessarily the truth.
In the tradition of Larry Cohen's The Private Files of J. Edgar Hoover (1977) and Mackenzie's own The Long Good Friday (1980), Ruby details dark deeds and darker motives.
"Everything connects up wrong," says a despairing Ruby following the presidential assassination. "The system's fucked."
Angry action entertainment, Mackenzie's conspiracy thriller delivers The Truth that only the movies can tell.
*    *    *
DANDY CANDY — As played by Sherilyn (Twin Peaks) Fenn, the fictional Candy Cane recalls Marilyn Monroe and Judith Campbell Exner, the girlfriend that JFK "shared" with mobster Sam Giancana. Mostly, though, she recalls Texas-born beauty Juanita Slusher, known professionally as Candy Barr.
The sort of character who deserves her own movie, Barr gained fame in the 1950s as a stripper and stag film star. For a time she was Los Angeles gangster Mickey Cohen's mistress and a pal to various movie stars. She was also Jack Ruby's friend. Following the Kennedy assassination, Barr was among the people questioned by the FBI.

Afterword: Although Ruby is hardly remembered today, it's due for rediscovery by cult-film fanciers. Despite the all-American subject matter, both the director and screenwriter are products of Thatcherite Britain and the artistic resistance that it bred. Together, they brought to the project the edgy nastiness that characterized that era and left us with a very English take on a great American tragedy.
As for "Dandy Candy," the real-life Candy Barr