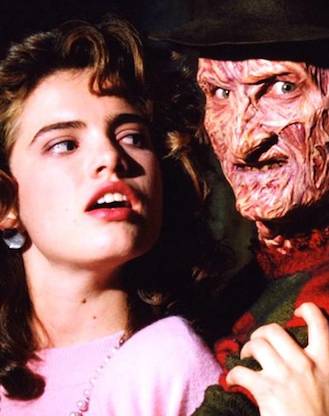 
A new twist on the teen-killer genre


Today (October 31), practicing Catholics in the historic city of Regensburg mark the feast of Bishop Wolfgang, the patron saint of Bavaria, who was canonized by Pope Leo IX in 1052. Closer to home, well, it’s All Hallow’s Eve, the day kids get to dress up and shake down their neighbours for sugary treats. It would also be the perfect day for me to post my review of John Carpenter's feature Halloween, arguably the most influential horror movie of its time. Except, I’m embarrassed to say, I have no record of ever having written one. Yes, I saw the picture and even remember a Halloween-related nightmare afterwards . . . but no actual review. So, let me divert your attention with the fact that Wolfgang also is the patron saint of wood carvers, many of whom might set aside their work gloves to raise a toast to him during the annual Oktoberfest celebration. Topping off their tankards (in German, krügs) would be an attentive tavern-keeper (or krüger). Which reminds me . . . there was another influential horror show from the 1980s that spawned a franchise, though I doubt that Wolfgang would approve of its homicidal Krueger character, or of his carving up the hapless teens who encounter him in their troubled dreams. The four fright films being added today to the Reeling Back archive (with links to each following the Afterword to this posting) include writer-director Wes Craven’s series opener, 1984’s A Nightmare on Elm Street.

A NIGHTMARE ON ELM STREET. Music by Charles Bernstein. Written and directed by Wes Craven. Running time: 93 minutes. Restricted entertainment with the B.C. Classifier’s warning: frequent gory violence. TINA GRAY (AMANDA WYSS) is terrified. Alone and clad only in a nightie, she is being pursued through some kind of subterranean steam plant by a hulking maniac with razor-sharp blades extending from the fingers of his gloved hand.
Just when escape seems impossible, just as the blades flash before her . . . she wakes up. Safe in her own bed, Tina notices that her nightie has somehow acquired four parallel rips down the front.
In the morning, on her way to school, the teenaged girl discovers that she was part of a subconscious nocturnal block party. Her friends — Nancy (Heather Langenkamp), Rod (Nick Corri) and Glen (Johnny Depp) — all shared the same Nightmare on Elm Street.
Just when we thought we'd seen the last of the slasher flicks, along comes writer/director Wes (The Hills Have Eyes) Craven. Just in time to infuriate crusaders against violence in popular entertainment, he's managed to reinvent the stalking-killer genre.
Here, he offers us a fiend that has bubbled up from the collective unconscious minds of its victims. To fall asleep is to risk falling into the grasp of that lethal hand.
Tina is the first. Rod Lane watches in horror as wounds open up on his comatose girlfriend's body. The police, having no previous experience with dream killers, book Rod for her murder.
Nancy Thompson knows better. Aware that some kind of evil force is lurking around Elm Street, she is slowly coming to the realization that she is going to have to destroy it, or die in the attempt.
Craven's picture is no mere catalogue of casualties. While providing the requisite number of shocks for the blood freaks, he takes the time to develop Nancy as a character with enough presence of mind and self-reliance to undertake her own defence.
Craven's gripping, humour-laced screenplay and imaginatively unnerving special effects make up for the ho-hum acting of his cast. The result is the best film of its kind since the original Halloween.

Afterword: When asked, the creators of 1978’s Halloween (John Carpenter), Friday the 13th (1980; Sean S. Cunningham) and A Nightmare on Elm Street (1984; Wes Craven) have all denied that their famous fright films were conceived for any purpose other than making money for their producers. Social commentary on the great issues of the day? Never crossed their minds, they say. Finding such meaning in their simple entertainments is the job of cinema historians, pop culture analysts and movie critics.
Well, OK. Let’s take note of the fact that Carpenter’s Halloween, the first “slasher” film, was released the two years before Ronald Reagan was elected President of the United States on a “conservative” agenda that included dismantling Franklin Roosevelt’s progressive New Deal. Just as small-town Illinois killer Michael Meyers threatened the lives of American teens, the Illinois-born Reagan was determined to limit their futures. Government, he said, was “the problem,” and he promised cuts to spending, taxes, regulations and the money supply.
Craven’s Nightmare was released a month after Reagan's re-election, and the old dotard was already showing the signs of a dementia that would later be diagnosed as Alzheimer’s disease. Were we supposed to see the remorseless Freddy Krueger as a Reagan dopplegänger? The filmmakers would reject any such suggestion, but the American dream was clearly falling apart for the generation coming of age during the administration of “the great communicator.” In common with Freddy, the Reagan nightmare became a franchise, generating horrors under the Bushes, George and George Jr., Bill Clinton, Barack Obama and now Donald Trump.
On a lighter note: Had he not gone on to fame in the films of Tim Burton (eight to date), Johnny Depp might be forever remembered for his screen debut in the role of Glen Lantz, a.k.a. Freddy Krueger’s third victim.