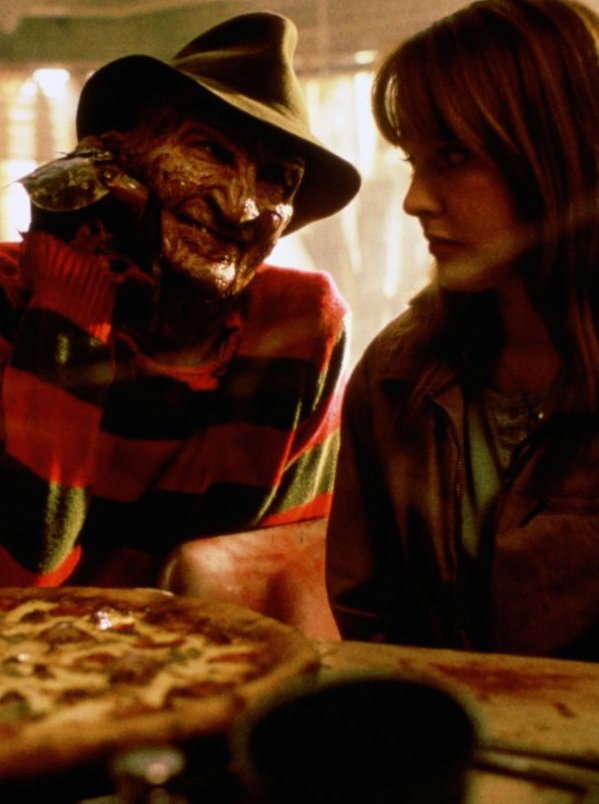 
Today (October 31), practicing Catholics in the historic city of Regensburg mark the feast of Bishop Wolfgang, the patron saint of Bavaria, who was canonized by Pope Leo IX in 1052. Closer to home, well, it’s All Hallow’s Eve, the day kids get to dress up and shake down their neighbours for sugary treats. It would also be the perfect day for me to post my review of John Carpenter's feature Halloween, arguably the most influential horror movie of its time. Except, I’m embarrassed to say, I have no record of ever having written one. Yes, I saw the picture and even remember a Halloween-related nightmare afterwards . . . but no actual review. So, let me divert your attention with the fact that Wolfgang also is the patron saint of wood carvers, many of whom might set aside their work gloves to raise a toast to him during the annual Oktoberfest celebration. Topping off their tankards (in German, krügs) would be an attentive tavern-keeper (or krüger). Which reminds me . . . there was another influential horror show from the 1980s that spawned a franchise, though I doubt that Wolfgang would approve of its homicidal Krueger character, or of his carving up the hapless teens who encounter him in their troubled dreams. The four fright films being added today to the Reeling Back archive (with links to each following the Afterword to this posting) include director Renny Harlin’s 1988 continuation, A Nightmare On Elm Street 4: The Dream Master.

Reviewed with:
DESTROYER. Written by Peter Garrity, Rex Hauck and Mark W. Rosenbaum. Directed by Robert Kirk. Running time: 94 minutes. Restricted entertainment with the B.C. Classifier's warning: frequent violence, very coarse language, occasional nudity.
HERO AND THE TERROR. Written by Dennis Shryack and Michael Blodgett, based on Blodgett’s 1982 novel. Directed by William Tannen. Running time: 96 minutes. Rated 14 Years Limited Admission with the B.C. Classifier’s warning: some violence, some very coarse language.
BLINDSIDE. Written by Richard Beattie. Music by Paul Zaza. Directed by Paul Lynch. Running time: 98 minutes.  Restricted entertainment with the B.C. Classifier's warning: some violence, nudity and suggestive scenes. THE DEATH TOLL IS ENORMOUS. In just four features, some 34 lives are snuffed out in graphic detail for the delectation of filmgoers.
The guilt felt by the guilty is nil. In three of the four pictures, the villain is a serial killer with powers bordering on the supernatural.
The Destroyer is Ivan Moser (Lyle Alzado), convicted slayer of 22, who survived the electric chair. Described as “half-alive,” this massively muscled behemoth lurks about an abandoned state prison awaiting fresh prey.
"Terror" Simon Moon (Jack O’Halloran), did away with 23 before being committed to a facility for the criminally insane. A hulk with “no thought processes,” he escapes to kill again in Hero and the Terror.
Freddy Krueger (Robert Englund), the dream demon who specializes in teen terminations, has a rap sheet going back three films. "I am eternal!’’ he boasts to 17-year-old Alice Johnson (Lisa Wilcox) in A Nightmare on Elm Street 4: The Dream Master.
Only Blindside, director Paul Lynch’s dull, Canadian-made thriller, offers reasonably mortal villains. A low-rent reprise  of Francis Ford Coppola’s The Conversation (1974), Lynch's picture features Harvey Keitel as Penfield Gruber, a morose professional snoop caught in a web of gangland betrayal and assassination.
In common with Krueger, Moon and Moser, Lynch’s killers are uniformly amoral and without conscience as they “whack” one another with maniacal glee. The mood of the film, though, is utterly gloomy, reflecting the depressed Gruber’s conviction that people are awful.
Since Blindside's bad guys are all drug dealers, it's possible to read into their ends a minor moral lesson. By contrast, the other movies' villains deal exclusively in death.
Despite the relentless pursuit of soulful rogue cop Dan O'Brien (Chuck Norris), the deranged Moon gets to snap a selection of (mostly female) necks before he faces down the hero.
Moser manages to wipe out most of an exploitation film crew working on location in his prison hideout. Krueger, adding gallows humour to his repertoire, continues to deplete Springwood’s adolescent population.
Worth noting, perhaps, is the fact that both Moser and Krueger are bested by self-reliant female characters. (Deborah Foreman’s Susan Malone in Destroyer; Wilcox’s Johnson in Nightmare 4).
As welcome as this is as a film trend, it’s overshadowed by the realization that these movies are offering mass murder as entertainment. Taken individually or together, this stuff is sick.

Afterword: It hardly seemed safe to set foot on Vancouver’s Theatre Row during the first week of autumn, 1988. Mass murderers lurked in almost every movie house, it seemed. Overwhelmed, I offered up the above package review expressing my disappointment with the lot. If I’d written a full review of the fourth film (of an eventual nine) in the Freddy franchise, I might have mentioned that it was an actual sequel to Nightmare 3. Surviving Dream Warriors Kristen (Tuesday Knight), Kincaid (Ken Sagoes) and Joey (Rodney Eastman) return for another go-around with an accidentally resurrected Krueger. What I didn’t know at the time was that the picture’s heroine, Alice (Lisa Wilcox) would go on to A Nightmare on Elm Street 5: The Dream Child, a film that I fully reviewed in 1989.
Nightmare 4 turned out to be a financial success for New Line Cinema, and marked the Hollywood breakthrough for Finnish director Renny Harlin. He scored a major hit with his next film, Die Hard 2 (1990), and seemed poised for great things. Considering his subsequent career, his most impressive accomplishment seems to have been his five-year (1993-1998) marriage to actress Geena Davis. During that time, they set up their own production company, and he directed her in two features, the 1995 pirate adventure Cutthroat Island and the 1996 superheroine epic The Long Kiss Goodnight. Neither was a financial success.