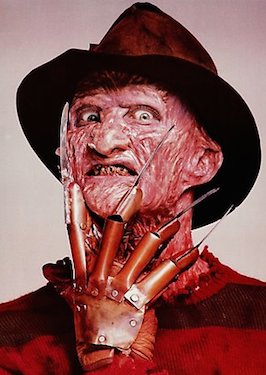 
Today (October 31), practicing Catholics in the historic city of Regensburg mark the feast of Bishop Wolfgang, the patron saint of Bavaria, who was canonized by Pope Leo IX in 1052. Closer to home, well, it’s All Hallow’s Eve, the day kids get to dress up and shake down their neighbours for sugary treats. It would also be the perfect day for me to post my review of John Carpenter's feature Halloween, arguably the most influential horror movie of its time. Except, I’m embarrassed to say, I have no record of ever having written one. Yes, I saw the picture and even remember a Halloween-related nightmare afterwards . . . but no actual review. So, let me divert your attention with the fact that Wolfgang also is the patron saint of wood carvers, many of whom might set aside their work gloves to raise a toast to him during the annual Oktoberfest celebration. Topping off their tankards (in German, krügs) would be an attentive tavern-keeper (or krüger). Which reminds me . . . there was another influential horror show from the 1980s that spawned a franchise, though I doubt that Wolfgang would approve of its homicidal Krueger character, or of his carving up the hapless teens who encounter him in their troubled dreams. The four fright films being added today to the Reeling Back archive (with links to each following the Afterword to this posting) include director Jack Sholder’s 1986 sequel A Nightmare On Elm Street Part 2: Freddy’s Revenge.

A NIGHTMARE ON ELM STREET PART 2: FREDDY’S REVENGE. Written by David Chaskin. Music by Christopher Young. Directed by Jack Sholder. Running time: 74 minutes. Restricted entertainment with the B.C. Classifier’s warning: some gory violence. COACH SCHNEIDER, THE BOYS' gym teacher at Springwood High, is no Mr. Chips. A locker room martinet, he is reputed to frequent leather bars in search of after-hours diversion.
This evening, in a smoky roadhouse called Don's Place, he has had the luck to find one of his very own students, a sleep-starved teen named Jesse Walsh (Mark Patton). Returning to the school basement, he orders Jesse into the showers, while he paces about his darkened office plotting lord knows what improprieties.
Suddenly the place goes crazy. Tennis balls pop out of their cans, basketballs leap from their shelves and a skipping rope comes alive, binding his wrists and dragging him across the floor.
The shocked Schnieder finds himself suspended from some ceiling pipes as invisible forces tear the clothes from his body.
Who's that emerging from the shadows, raising a gloved hand that ends in four razor-sharp metal claws? Is the unfortunate coach about to fall victim to night-stalking mass murderer Freddy Krueger (Robert Englund)?
A Nightmare on Elm Street, Part 2: Freddy's Revenge is one of those misbegotten little horror epics that can’t make up its mind whether it wants to be funny or frightening. In its confusion, it succeeds in being neither.
Less a sequel than a remake of writer-director Wes Craven's effectively unsettling 1984 chiller, director Jack (Alone in the Dark) Sholder's sophmore feature returns to the old Thompson house at 1428 Elm. After sitting empty for five years, it has a new family for its resident spook to harass.
As in the previous film, phantasmic Freddy invades the dreams of a sleeping teenager. "Kill for me," the nightmare monster says to 17-year-old Jesse.
As in the previous picture, the aggravated adolescent has a girlfriend a lot brighter than himself. When Lisa Webber (Kim Myer) decides to get involved, the question becomes “can pure evil prevail over the power of young love?”
Craven, to his credit, was able to translate a powerful, if implausible, idea into a gripping terror tale. Sholder's stroll through the same neighbourhood has neither the imagination nor the shock value of the original.

Afterword: A Nightmare on Elm Street writer-director Wes Craven never saw his 1984 feature as series material. But its production company, New Line Cinema, could hardly ignore the film’s financial success (made for $1.8 million, it eventually grossed $25.5 million). As Craven had no interest in a sequel, producer Robert Shayne put a script by first-time screenwriter David Chaskin into the hands of journeyman horror director Jack Sholder and, voila, Freddy Krueger was  back in business.
To date, the franchise has spun off nine big-screen films, and a two-season syndicated TV series, Freddy’s Nightmares (1988-1990). An anthology show in the manner of the classic Twilight Zone, it featured Krueger as the sinister program host, introducing a weekly package of new horror stories. (There have also been novelizations of the movies and a lot of comic books, but those are items that fall into the category of collectors’ ephemera.)
Perhaps the greatest beneficiary of the Nightmare phenomenon was actor Robert Englund, a supporting player in low-budget genre pictures before his breakthrough as Freddy Krueger. Since 1984, he’s been cast as the character in eight features, 44 TV shows (plus one guest appearance on the 1998 Treehouse of Horror episode of The Simpsons), two music videos and a video game. With success came recognition, and Englund continued as  a starring player in low-budget genre pictures.