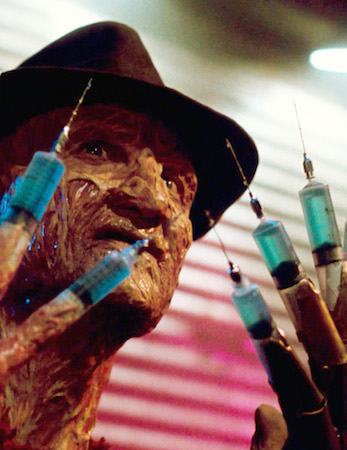 
Today (October 31), practicing Catholics in the historic city of Regensburg mark the feast of Bishop Wolfgang, the patron saint of Bavaria, who was canonized by Pope Leo IX in 1052. Closer to home, well, it’s All Hallow’s Eve, the day kids get to dress up and shake down their neighbours for sugary treats. It would also be the perfect day for me to post my review of John Carpenter's feature Halloween, arguably the most influential horror movie of its time. Except, I’m embarrassed to say, I have no record of ever having written one. Yes, I saw the picture and even remember a Halloween-related nightmare afterwards . . . but no actual review. So, let me divert your attention with the fact that Wolfgang also is the patron saint of wood carvers, many of whom might set aside their work gloves to raise a toast to him during the annual Oktoberfest celebration. Topping off their tankards (in German, krügs) would be an attentive tavern-keeper (or krüger). Which reminds me . . . there was another influential horror show from the 1980s that spawned a franchise, though I doubt that Wolfgang would approve of its homicidal Krueger character, or of his carving up the hapless teens who encounter him in their troubled dreams. The four fright films being added today to the Reeling Back archive (with links to each following the Afterword to this posting) include director Chuck Russell’s 1987 series continuation, A Nightmare On Elm Street 3: Dream Warriors.

A NIGHTMARE ON ELM STREET 3: DREAM WARRIORS. Written by Wes Craven and Bruce Wagner. Music by Angela Badalamenti. Directed by Chuck Russell. Running time: 94 minutes. Restricted entertainment with the B.C. Classifier's warning: some gory violence and very coarse language. DR. NEIL GOLDMAN (CRAIG Wasson) needs a rest. A staff psychiatrist at Springwood's Westin Hills Hospital, he's been losing patients at an alarming rate in what appears to be an epidemic of teen suicide.
The one thing his young charges have in common is a fear of falling asleep. A monster awaits them in their dreams, they claim, a monster that's out to kill them.
According to Sister Mary Agatha (Nan Martin), a nun who  appears mysteriously at the second victim's funeral, the problem is an “unquiet spirit (that) must be laid to rest. It is an abomination to God and man. ''
According to Nancy Thompson (Heather Langenkamp), a  graduate student specializing in sleep disorders, the monster has a name — Freddy Krueger (Robert Englund) — and an established history. A lock of white hair recalls her own teenaged encounter with him in the Thompson family home at 1428 Elm St.
“Nothing makes any sense,” protests the confused Goldman.
“Then, maybe you're ready for the truth,” says Nancy, as she relates the tale told in 1984's A Nightmare on Elm Street.
Wes Craven should give it a rest. The writer-director who created the original Elm Street shocker, he could have been remembered for his imaginative reinvention of the slasher movie.
An unsettling fantasy, the first Elm Street film introduced Krueger as a child killer who beat the courts, only to be burned alive by an angry mob of parent vigilantes. An example of really bad karma, Krueger found his way into the collective unconscious of their teenaged children.
Though more complex than Friday the 13th, et al, Craven's film was still in the modern tradition of amoral horror. In such pictures, evil is random and a victim's virtue counts for less than guile and good luck.
In A Nightmare on Elm Street 3: Dream Warriors, he makes the mistake of tossing religion into his mix. From the nun, Goldman learns that Frederick Charles Krueger is “the bastard son of 100 maniacs,” a child born to a young hospital worker who was accidentally locked in with the criminally insane and “was raped thousands of times.”
The only thing that will stop Krueger is burial of his mortal remains “in hallowed ground.”  While Goldman seeks out his corpse, Nancy group-hypnotizes the kids — “the last of the Elm Street children” — so that they can confront Freddy together as dream warriors in the world of the unconscious.
An inelegant mess of the supernatural and pseudo-science, tyro director Chuck Russell's picture eventually falls apart in a confusion of ethically dubious expectations and shock effects.

*    *    *
ELM STREET ODDMENT: No, Wes Craven was not involved in the making of 1986’s A Nightmare on Elm Street Part 2: Freddy's Revenge. Though actor Englund reprised the Freddy role, its story and other characters were entirely new.
Working from a script by David Chaskin, director Jack Sholder couldn't make up his mind whether the results were supposed to be funny or frightening. The result was something of a mess.

Afterword: OK, the third Nightmare on Elm Street instalment suggests that Freddy Krueger’s background is Roman Catholic. It was an impudent choice, considering that the series creator and film’s co-writer Wes Craven was an Ohio-born Baptist. Raised, by his own admission, in “a very strict and conservative” family environment, he attended the Evangelical Protestant Wheaton College. Craven’s appropriation of Catholic practice reminded me of a conversation I had in 1976 with Harvey Bernhard, the producer of director Richard Donner’s antichrist epic, The Omen.
The earlier picture’s plot, involving rogue priests and menacing monks, seriously misrepresented Church doctrine as I understood it. When I asked Bernhard where it had all come from, he cheerfully admitted that the film’s “prophecy” was based on a pamphlet a street-corner preacher handed him one afternoon on Hollywood Boulevard. The Catholic trappings were essentially set decoration, he said. Most Evangelical clergy dressed like civilians, but Catholic priests had “uniforms,” and that made them recognizable representatives of a spiritual belief system. For the movies, where stories are told visually, the choice was a no-brainer.
So, the moral of this story seems to be that, when settling into a horror film, put your brain in neutral and just go with the flow. To quote the ad line for Craven’s debut feature, 1972’s The Last House on the Left, “keep telling yourself: it’s only a movie.”