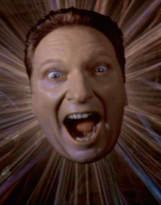 
Director Peter Hyams spent his first visit to B.C. outdoors working on the railroad, to produce the 1990 action film Narrow Margin. It worked out well, so Hyams, born on this day (July 26) in 1943, returned to Vancouver to shoot his next picture, the 1992 special-effects fantasy Stay Tuned.

Thursday, August 20, 1992.
STAY TUNED. Written by Tom S. Parker and Jim Jennewein, based on a story by Parker, Jennewein and Richard Siegel. Music by Bruce Broughton. Photographed and directed by Peter Hyams. (Animated sequences directed by Chuck Jones.) Running time: 88 minutes. Rated Mature with no B.C. Classifier's warning. THE AFTERLIFE IS SO uncertain.
It can be heavenly. When actor Jeffrey Jones signed on with director Tim Burton for 1988's Beetlejuice, the result was a supernaturally funny post-mortem comedy.
It can be hellish. A few years earlier, poor Jones was possessed by extraterrestrial demons in a lame fantasy called Howard the Duck (1986).
It can be Stay Tuned, a feeble attempt at pop parody. Here, the saturnine Jones plays Spike, the managing director of Hellvision, coming to you via satellite dish with the promise of 666 channels.
Satan's own cable network, Hellvision has "turned the process of soul acquisition into an entertainment bonanza." People who sign up for the service end up as infernal game-show contestants.
To give the devil his due, Stay Tuned director Peter Hyams often has good ideas. Pictures like 1977’s Capricorn One, Hanover Street (1979) and 2010 (1984) all looked good on paper.
It's his follow-through that's disappointing. In Stay Tuned, suburban Seattle couple Roy (John Ritter) and Helen Knable (Pam Dawber) are the lost souls condemned to 24 hours of living in their big-screen TV.
Among Roy's torments is a guest appearance on the Duane's Underworld segment of Saturday Nite Dead. If the very idea of this sets you to giggling, then Stay Tuned may well be for you.
For me, the idea of a movie satirizing a television spot that is, itself, a parody of television self-parody, is just too stunned to be taken humorously. It tells me that Hyams is aiming his picture directly at viewers whose lips move during the commercials.
Thank goodness for Charles M. “Chuck” Jones. Called in to direct the picture's cartoon segment — a bit in which Roy and Helen are turned into mice and pursued by RoboCat — Jones brings the film alive with all the pace and energy of classic Warner Brothers animation.
Then it's back to Hyams's own dreary, uninspired live-action feature. "I think he's losing it," one of Spike's perfidious executive assistants says of his boss.
"It's a pathetic thing to watch."
It is indeed.
Perhaps it will look better on video.

Afterword: Peter Hyams deserves more respect. Yes, the above review is something less than positive, and the New York-born director didn’t score a hit every time he stepped up to the plate. To the best of my knowledge, no one’s ever called him an auteur. His talent was eclecticism. Hyams brought a vivid imagination and a solid B-movie sensibility to a variety of genre projects. You could usually rely upon his pictures to be interesting, if not always successful. Coming of age creatively in the 1960s, he made good use of the skepticism that he internalized as a young TV newsman. In his fourth feature and breakthrough hit, 1977’s Capricorn One, it informs the story of a faked mission to mars. He’d already tried his hand at gritty buddy cop comedies (1974’s Busting) and period teen drama (Our Time; 1974). He would follow up his sci-fi success with a Second World War romance (Hanover Street ; 1979) and an urban vigilante thriller (The Star Chamber ; 1983).
In 1984, Hyams was back to the future, releasing 2010: The Year We Make Contact, the authorized sequel to Stanley Kubrick’s 1968 classic 2001: A Space Odyssey. It was the first feature on which he worked as his own cinematographer, a job that he performed on his 13 subsequent features. In 1990, he made the  first of the three features that he would shoot in British Columbia. Locations for the noir thriller Narrow Margin included Grouse Mountain and B.C. Rail's Howe Sound line. The 1992 fantasy Stay Tuned (reviewed above) was shot in Burnaby’s versatile Bridge Studios complex, and 1994’s Timecop made full use of urban Vancouver.
An early example of a feature film adapted from a comic book, Timecop was the first time that Hyams worked with action star Jean-Claude Van Damme. It turned out to be the congenial Van Damme's most successful film, and he reunited with Hyams a year later for Sudden Death (1995), shot on location in Pittsburgh. Hyams’s most recent feature, 2013’s Enemies Closer, is his third with the star action icon. Though its story is set on a remote stretch of the Pacific Northwest border, the picture was filmed in Bulgaria. The ever-innovative Peter Hyams turns 73 today (July 26).