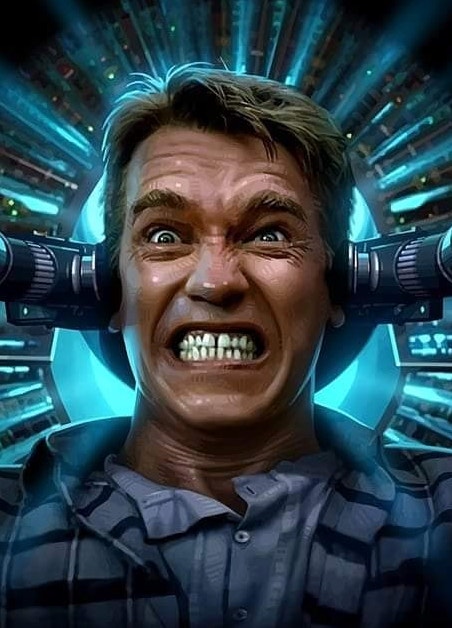 
Looking ahead to the tech of today


If this Reeling Back posting had been made on July 18, it might have noted the 1610 death on that day of Michelangelo Merisi da Caravaggio, the Italian Baroque painter who gave us new ways of seeing art, or the 1817 passing of Jane Austen, the English novelist who was a pioneer of literary realism, especially in the depiction of women. In addition, it would have celebrated the birth in 1938 of Paul Verhoeven, the Dutch director who expanded our ways of experiencing cinema art and whose “career-long project,” (according to Slant online magazine critic Jaime N. Christley) has been “to demonstrate that every woman has a touch of Lysistrata.” Today, it’s November 9, so instead we’ll recall the opening of the 2016 Total Verhoeven event in New York. Organized by the Manhattan-based cinema archive Film at Lincoln Center, it was a 14-day retrospective that included his 16 feature films and five short subjects, each an example of his ability to “push the boundaries of sex, violence, and accepted good taste to daringly subversive ends.” The four Verhoeven films being added today to the Reeling Back archive (with links to each following the Afterword to this posting) include his action-packed interpretation of a short story by science-fiction icon Philip K. Dick, in which Arnold Schwarzenegger stars as a man who may not be what he seems, 1990’s Total Recall.

Friday, June 1, 1990
TOTAL RECALL. Written by Ronald Shusett, Dan O’Bannon and Gary Goldman. Based on the 1966 short story We Can Remember It for You Wholesale, by Philip K. Dick. Music by Jerry Goldsmith. Directed by Paul Verhoeven. Running time: 111 minutes. Rated 14 Years with the B.C. Classifier’s warning: frequent violence, some very coarse language, occasional nudity and suggestive scenes. “OPEN YOUR MIND."
Pain is evident in the mutant Kuato’s face as he tries to mind meld with Douglas Quaid (Arnold Schwarzenegger).
"Open your mind!" A Martian revolutionary leader, Kuato (Marshall Bell) needs to psychically connect with Quaid's subconscious in order to release the secrets that will topple the mining colony's evil dictator Cohaagan (Ronny Cox).
"Open your mind!" Schwarzenegger tries. His eyes bulge with the effort.
Sadly, his mind already is as open as they come. Empty of all furnishings, it resembles a basement suite with a vacancy sign in the window.
I went in to see Total Recall with an open mind. After all, director Paul Verhoeven is the man who made RoboCop, my choice as the best film of 1987.
After 15 years of serious, innovative filmmaking in his native Holland, Verhoeven had answered America's siren call. RoboCop, his first Hollywood feature, was a stunning blend of sharp social commentary and effective action entertainment.
He'd earned his admission to the toy shop. In Total Recall —based on the short story We Can Remember It for You Wholesale, a 1966 tale of pulp paranoia by Philip K. Dick — he does manage to offer the best selection of high-tech playthings since the halcyon days of the Bond films.
Its hero, Douglas Quaid, is a 21st century construction worker who visits Rekall, Inc., a company that implants fantasies directly into the brain. He opts for an "Ego Trip," a simulated visit to Mars as a secret agent.
Quaid's trip ends before it starts, when Rekall technicians discover he has already been the subject of memory erasure.
Or do they?
Recycling one of the oldest plots in the genre, screenwriters Ronald Shusett, Dan O’Bannon and Gary Goldman tell the story of a man who may, or may not, be experiencing a pre-fab B-budget fantasy.
Verhoeven's own 1941, Total Recall is an A-plus-budget item. Unfortunately, just to get into the toy shop, the director had to accept the shop-owner's version of a Catch-22.
To protect its investment, Carolco Pictures promised the starring role to bankable superstar Schwarzenegger, a performer who's only effective when partnered with a skilled comedian (as in the 1988 pictures Twins and Red Heat), cast as a remorseless villain (1984’s Terminator) or allowed to play a simple, good-natured bodybuilder with an Austrian accent (1976’s Stay Hungry, or 1982’s Conan the Barbarian).
A beefcake presence does not preclude acting talent, of course. The granitic Charlton Heston (whom Arnie resembles) works hard at his craft, effort that's won him critical respect.
Arnie just works out.
Though the script calls for the mutant to connect with Quaid, Arnie seems incapable of connecting with anything like a believable character.
Lacking a credible dramatic performance at its centre, Total Recall is just another visually stunning special-effects show built around an emotionally empty exercise in ultra-violence.

Afterword: Paul Verhoeven’s second Hollywood feature was an even bigger hit than his 1987 home run RoboCop. The brainchild of screenwriter Ronald Shusett, who acquired the rights to the short story in 1974, Total Recall eventually became a script in 1980. According to Rob van Scheers’s 1996 biography Paul Verhoeven, the project languished in development hell for nearly a decade. When it arrived on Verhoeven’s desk, it existed in 45 versions. The director saw the potential, but to get his version on the screen, he had to accede to production company Carolco’s insistence that he cast established action star Arnold Schwarzenegger. My negative review of the big guy’s performance did not prevent the picture from becoming an international boxoffice success.
Two years later, in my review of Verhoeven’s 1992 mystery-thriller Basic Instinct, I focused more on the work of the director than his star. “Reduced to naked essentials, (his) films are all about identity. Since arriving in Hollywood, the Dutch director has made the search for the authentic self his key theme.” At that moment, I might have been writing about the author whose work inspired Total Recall, Philip Kindred Dick. Today, the Chicago-born author is among the best-known American sci-fi writers. His paranoid visions have inspired such accomplished directorial talents as Ridley Scott (Blade Runner, 1982), Verhoeven, Steven Spielberg (Minority Report, 2002), John Woo (the filmed-in-Vancouver Paycheck, 2003) and Richard Linklater (A Scanner Darkly, 2006). Sadly, the big bucks that follow major motion-picture adaptations eluded him. Dick died of a stroke on March 2, 1982, just 16 weeks before Blade Runner's June 25 U.S. premiere.
Paul Verhoeven moved from Holland to Hollywood in 1983. I can find no evidence that he ever met Dick. Even so, he displayed a remarkable understanding of the writer’s thought process. He’d read We Can Remember It for You Wholesale, Van Scheer tells us, and “he was struck by the continuously open border between fact and fiction — and the continual fear of psychosis that burdens the protagonist. Verhoeven realized that, as with his own film [1983’s] De verde man, [The Fourth Man] this script could be interpreted on two levels: either everything that happens to the main character Quaid is reality, or it takes place only in his head.” As a result, Verhoeven’s “collaboration” with Dick remains a powerful commentary on today’s tech-mediated world.