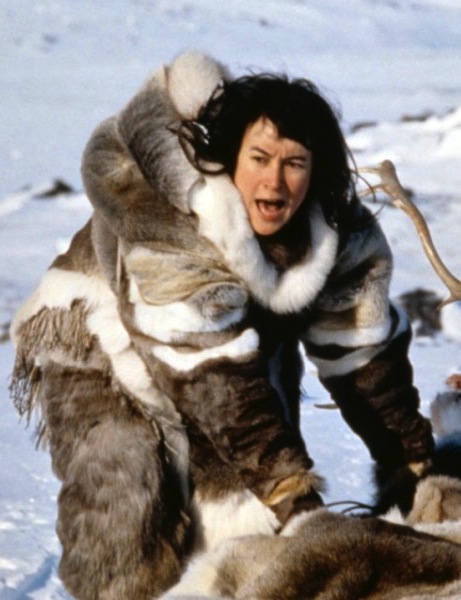 Assertive Igiyook (Jennifer Tilly) finds herself caught between loyalty to her husband and the demands of the tribal chief in 1992's Shadow of the Wolf.


Because she grew up on Vancouver Island, we think of Jennifer Tilly (and her sister Meg) as Canadian. Born on this day (September 16) in 1958 in California, she made her first Canadian feature, Shadow of the Wolf (1992), in Quebec.

Thursday, March 11, 1993.
SHADOW OF THE WOLF. Written by Rudy Wurlitzer and Evan Jones. Based on Yves Theriault's novel Agaguk (1958). Music by Maurice Jarre. Co-produced and directed by Jacques Dorfmann. Running time: 112 minutes. Rated 14 Years Limited Admission with the B.C. Classifier's warning "some violence, occasional nudity and suggestive scenes." THE OPENING SCENE is a Far Side cartoon come to life.
Alone on the tundra, an Inuk hunter sleeps in his igloo. Suddenly, a polar bear's paw scoops through the snow-block dome seeking snack treats.
Says the bear in the famous Gary Larson version: "I just love these things! . . . Crunchy on the outside, and a chewy center!"
In director Jacques (Le Palanquin des larmes) Dorfmann's Shadow of the Wolf, the bear has no dialogue. In a turnabout on the cartoon, the arctic predator loses both his lunch and his life when fearless Agaguk (Lou Diamond Phillips) turns out to be an expert in hand-to-paw combat.
At this point, of course, the mood of the piece is up for grabs. The picture immediately cuts to an extremely silly-looking shamanistic ritual being performed by Agaguk's dad, the full-bearded Chief Kroomak (Toshiro Mifune).
Dorfmann is not trying to be funny. Unfortunately, his fascination with period exotica produces something that plays like a cross between 1991's Black Robe and Clan of the Cave Bear (1986)
The story of a man facing his destiny, it features international stars spouting stilted dialogue. "Stop, in the name of the law," says Constable Henderson (Donald Sutherland), a Mountie manhunter.
"Women do not ask questions," Agaguk tells his wife, the self-assertive Igiyook (Jennifer Tilly).
"There is no place in this camp for your son and me," villainous whiskey trader Brown (Bernard-Pierre Donnadieu) snarls at Mifune's Kroomak.
The story begins with the banishment of Agaguk, who comes into conflict with Kroomak over possession of Igiyook. His departure occasions a struggle with the unpleasant Brown, resulting in the white man's death. Flight and pursuit by lawman Henderson ensue.
Based on Quebecois writer Yves Theriault's pulpy 1958 novel Agaguk, Shadow of the Wolf offers the sort of mildly mystic noble-savage nonsense that plays well in Europe. Canadians will remember Theriault as the journeyman author who novelized one late-1960s Quebec-made sexploitation film (director Denis Heroux's Valerie; 1969) and provided the screenplay for another (Heroux's Initiation; 1970).
Set in the mid-1930s, Dorfmann's plodding Agaguk adaptation gets actress Tilly out of her parka just long enough to work the old sex cure on Phillips after his character has been seriously injured fighting with a wolf. Anthropology students will recognize in this a symbolic fulfillment of the traditional shamanistic resurrection.
But then, we all know that there has to be a serious artistic reason for a name performer to do a nude scene.

Afterword: After her standout performance in a supporting role in 1989's The Fabulous Baker Boys, Jennifer Tilly likely saw Shadow of the Wolf as an opportunity to join an international cast making an offbeat, potentially important contribution to cinema art. A Franco-Canadian co-production, its Toulouse-born director Jacques Dorfmann had co-produced the hit prehistoric epic Quest for Fire  (1981). Among her co-stars were the Japanese acting legend Torshiro Mifune, French cinema stalwart Bernard-Pierre Donnadieu and Canada's Donald Sutherland, proof that Dorfmann knew how to put together a package. The son of Robert Dorfmann, the Parisian producer whose resume included classics of the French New Wave (1961's Last Year at Marienbad) and mid-Atlantic co-productions such as Papillon (1973), Jacques grew up in the European movie business. He'd earned his own first feature producer credit in 1969, for the Franco-Italian thriller Crime Thief. Quest for Fire was his 22nd feature, and the first of 10 he would make under the provisions of the Canada-France co-production treaty. Dorfmann made his directorial debut with Le Palanquin des larmes (aka Journey of Tears), a multi-generational drama that added China to the production mix. Filmed in Shanghai as a TV mini-series, it was trimmed down to feature length for its 1987 theatrical release. He was back in 1990 as the producer on Bethune: The Making of a Hero, (1990), an historical biography that starred Donald Sutherland. Shadow of the Wolf, his second directorial effort, was filmed in Montreal and the Northwest Territories. In 2001, he brought together Christopher Lambert, Klaus Maria Brandauer and Max van Sydow for Vercingetorix (released in North American as The Gaul). An epic set in the 1st century B.C., it was filmed in Bulgaria in yet another co-production deal with Canada.