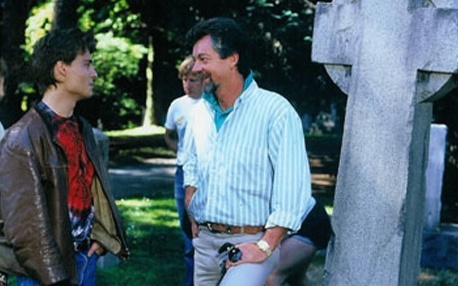 
In Part 7 of an eight-part series, Reeling Back brings the story of the first century of B.C.'s Filmmaking Industry to a conclusion with the dream of a “Hollywood North” realized in the reality of Vancouver as North America’s second largest screen media production centre.

When Justis Greene took over as film promotion officer in July 1978, all the important infrastructure was in place for an industry to provide full-service location support. The Canadian dollar had begun its historic decline that would reach 72 cents US in 1986, an economic reality that made it possible for U.S. producers working in B.C. to realize irresistible savings. A significant increase in the production of features, TV movies, series pilots and series episodes created the need for new facilities.
In 1981, the Dominion Bridge Co. building in Burnaby was pressed into service as a movie soundstage for the Charlton Heston-directed feature Mother Lode. It remained busy, officially opening as the provincially-owned Bridge Studios in 1987, the year that Los Angeles producer Stephen J. Cannell brought two television series — Wiseguy and 21 Jump Street — to B.C. In 1989, together with Canadian Paul Bronfman, Cannell built the North Shore Studios in North Vancouver (renamed Lions Gate Studios in 1997).
The growth of the service sector continued under Dianne Neufeld, who succeeded Greene at the BCFC in 1982. It was reflected in an annual industry directory, The Reel West Film And Video Digest, first issued in 1980. Its publishers, Sandy Flanagan and Martin Borycki, spun off the bi-monthly Reel West Magazine in April, 1985, a periodical that became an advocate for the B.C.-based industry.
Telefilm Canada's creation of a  a Broadcast Fund (1984) and Feature Film Fund (1986) did not impress the magazine's editors, who pointed out that the federal agency received 16 percent of its funding from B.C., and returned only two percent to the province.
TV producers, meanwhile, were sufficiently impressed with B.C. to bring ever more sophisticated series into the province. By the mid-1990s, so many special-effects-dependent shows were based in Vancouver that the region became known as “Hollyweird.”
The Vancouver International Film Festival, revived in 1982, added a proactive Trade Forum in 1986. A year later, the privately-owned Vancouver Film School opened. Such factors contributed to the parallel growth of indigenous film making. In 1987, the provincial government set up B.C. Film, with Wayne Sterloff as president, to provide funding for local productions.
Some B.C.-based producers, including Lloyd Simandl and James Shavick, prospered by making direct-to-video features. Others, including Peggy Thompson, Charles Wilkinson, Sandy Wilson and the fearless documentarist Nettie Wild, developed independent theatrical features.
In 1991, University of B.C. film student John Pozer produced as his Master's thesis a feature film, The Grocer's Wife, that brought together Bruce Sweeney, Mina Shum, Kathy Garneau, Gregory Wild and Lynn Stopkewich, all of whom went on to direct their own independent features.
The visibility of filmed-in-B.C. TV shows such as The X-Files (1993-1997) and such blockbuster features as First Blood (1982), The Accused (1987),  Legends of the Fall (1994) and Double Jeopardy (1999), have established B.C. as a major North American production centre, rivalling New York for the No. 2 position (after Los Angeles).
Such is its success that in 1999 California's production unions began lobbying U.S. politicians to protect them from B.C.’s "foreign" predators.

The above is Part 7 of an eight-part restoration of an Encyclopedia of British Columbia entry written by Michael Walsh originally published in 2000. For additional information on this archived material, please visit my FAQ.


TIMELINE: 1978-2000
These are the significant events in the history of the B.C. film industry. For those who want to know more, included in square brackets at the end of each item is a reference  to my source for the information. The first one — [HP/11] — guides you to page 11 of Hot Property - A Tribute to 86 Years of Motion Picture Production in British Columbia 1898 - 1984, published in 1984. All of the works I consulted in the preparation of this history are listed in this posted Bibliography. Each has a reference code to identify it in the Timeline listings.