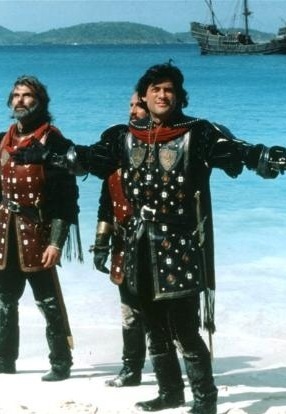 Overdressed for an afternoon on a Caribbean beach, Cristoforo Colombo (George Corraface) assures the natives that he comes in peace before asking for directions to the gold, in director John Glen's Christopher Columbus: The Discovery

Are we there yet?


While Canadians take time off to mark Thanksgiving, our American friends celebrate Columbus Day. It's the U.S. national holiday that recalls the voyage of a confused Genoese mariner who fetched up in the Caribbean on this day (October 12) in 1492. (He was searching for Asia on behalf of Spain.) Well, many Americans mark it. The two most recent stars on the spangled banner, the states of Alaska and Hawaii, don't recognize it at all. Nor do Oregon or South Dakota, while Iowa and Nevada currently sit on the fence, with laws that allow their governors to proclaim it (or not) from year to year. The traditionally feisty citizens of Berkeley, California, turned their backs on Chris in 1992, replacing his day with an annual celebration of America's Indigenous People. Despite some push-back from Italian-Americans — who view Columbus as one of their own — rebranding the October holiday has been gaining momentum on the municipal level. This year, Minneapolis and Vancouver's closest neighbour, Seattle — two cities with names taken from local native languages — will join those now marking Indigenous People's Day. In Spain, where the crown enjoyed the benefits of his four voyages for the next three centuries, Columbus remains a hero, with October 12 celebrated as Fiesta Nacional (National Day). In 1992, there were two feature films marking his first voyage's 500th anniversary. Warner Brothers made it into theatres first, with Christopher Columbus: The Discovery.

Tuesday, August 25, 1992.
CHRISTOPHER COLUMBUS: THE DISCOVERY. Written by John Briley, Gary Bates and Mario Puzo from a story by Mario Puzo. Music by Cliff Eidelman. Directed by John Glen. Running time:  120 minutes. Rated Mature with the B.C. Classifier's warning "some nudity and occasional violence." WHERE IS RICHARD Lester now that we really need him?
The director of 1973's The Three Musketeers  is one man who knows how to buckle a swash, while bringing past times to life with authentic feeling and great good humour. Lester might have made something out of Christopher Columbus: The Discovery.
As it is, the film is mostly at sea. Under the indifferent hand of James Bond specialist John Glen, the picture founders between light-hearted action-adventurism and dutiful historical epic.
Credited with the discovery of "the new world," Columbus's 1492 voyage coincided with the expulsion of both Jews and Moslems from a newly unified Spain. Tradition has it that the Italian-born "dreamer" had the ear of Isabella, Queen of Castile.
In this version, he also attracts the eye of Spain's Grand Inquisitor, the Dominican monk Tomas de Torquemada. At first, both the dialogue and casting favour a puckish approach.
In the title role is European actor George Corraface, a player best remembered for his performance as Felicien Mallefille, George Sand's impulsively violent lover in 1991's Impromptu.
As Cristoforo Colombo, his first scene has him marvelling at the imported goods in a Turkish bazaar. "Imagine the profit in a shipload of these," he says. Glen establishes his character by having him buy a map, win a street fight and attempt to charm a local lady.
More profitably charmed is Spain's Isabella (Rachel Ward). "You have a way with women, Columbus," says the flirtatious monarch.
"I am from Genoa, your Ladyship."
Less impressed is the sticklike King Ferdinand (Tom Selleck). Potentially hostile is the powerful Torquemada (Marlon Brando at his most toadlike) with whom Columbus successfully debates cosmology.
Eventually given command of a ship, the fun-loving mariner invites his mistress, busty Beatriz Enriquez (Annette Funicello clone Catherine Zeta Jones) into his captain's cabin.
"She's a fine vessel," Chris says. "Perhaps a bit top-heavy and narrow of beam. Not unlike someone else I know."
Faster than you can say "Santa Maria," he tips his lady on to a handy bunk. I'd say that director Glen harbours fond memories of Errol Flynn's greatest hits.
Unfortunately, a pall of historical pretence falls over the proceedings. When the voyage gets underway, Captain Blood turns into Captain Bligh.
Suddenly, more characters than we can comfortably recognize are skulking about, glowering, griping, plotting and praying. The story turns nasty and brutish as the three tiny ships bob across the "Ocean Sea" in pursuit of gold and glory.
Since our history teachers gave away the ending years ago, it's incumbent upon screenwriters Mario (The Godfather) Puzo, John (Gandhi) Briley and Cary Bates to keep us interested in the working out of the tale. This they fail to do.
Drawing upon the historical record, they get serious and seriously bogged down. The result is a plodding second half that may be correct — indeed, even politically correct — but lacks clarity or momentum.
Christopher Columbus - The Discovery ends up a voyage of the darned.

Afterword: From the team that brought you The Three Musketeers, The Four Musketeers, Superman: The Movie (plus its sequels) and Santa Claus: The Movie . . . 1992's Christopher Columbus - The Discovery was the final production from the father-son team of Alexander and Ilya Salkind. Alexander died in 1997 at the age of 75. Ilya, now 67, has done little of note since their Columbus feature sailed off the edge of the earth, a major commercial and box-office failure. (Its competition for the almost non-existent maritime-epic audience, 1492: Conquest of Paradise, did no better.) For Georges Corraface, a Paris-born leading man with a dozen years of European television and feature film roles to his credit, it was his best chance to grasp the brass ring of international stardom. In the years since, the trilingual actor has worked continually in Europe, but remains a faded memory in North America. The Hollywood fame that eluded Corraface went instead to the young woman who played his character's mistress, the girl I described as an "Annette Funicello clone."  Although Catherine Zeta-Jones played the role of Sheherazade in director Philippe de Broca's little-seen 1990 comedy Les 1001 nuits, Christopher Columbus - The Discovery was effectively her feature film debut. Starring roles ensued, in which the Welsh-born beauty demonstrated her ability to sing, dance, wield a sword and win an Oscar (for her killer performance in 2002's Chicago).

See also: Last year at this time, Reeling Back sliced into some Thanksgiving turkey to mark the Canadian holiday celebration. On offer was a package of five theatrical motion pictures that were inspired by popular TV series, a collection of big screen gobblers that included 1994's The Flintstones