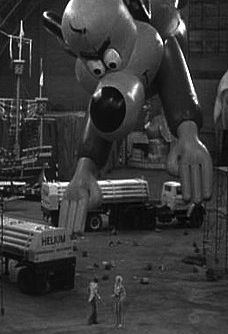 
Today (November 26) is Thanksgiving Day in the U.S., the national holiday that evokes considerable ambivalence in American popular culture. In 1984, writer-director Woody Allen marked the occasion by serving up a slice of cinematic turkey called Broadway Danny Rose.

Sunday, January 29, 1984.
BROADWAY DANNY ROSE. Music supervised by Dick Hyman. Written and directed by Woody Allen. Running time: 86 minutes. General entertainment with the B.C. Classifier's warning: occasional swearing. IS IT TIME FOR ANOTHER Woody Allen movie already?
Well, a contract is a contract, I suppose, and Broadway Danny Rose looks like a picture that got made because the boys in Orion Pictures' front office said they needed a picture, any picture!
In fulfillment of his contractual obligation and failing a good idea, Allen fell back on another go-around with his exaggerated schnook character. Here, he plays Danny Rose, a small-time New York theatrical agent who hustles bookings for one-armed jugglers, one-legged tap dancers and blind xylophonists.
The film begins with a gaggle of off-duty stand-up comedians sitting around telling one another supposedly funny stories about the "legendary" Rose. The topper (and the film's main storyline) is the one about how Danny fell in love.
It all happened while Rose was managing a comeback for Lou Canova (Nick Apollo Forte), a lounge singer who once had a record on the pop charts "for about 15 minutes" in the 1950s. The nostalgia market was ripe for Lou, but only if he could sort out his love life.
In the story, the married Lou is passionately involved with a brassy gangster's widow named Tina Vitale (Mia Farrow). Danny doesn't know about Tina's comic-opera Italian connections when he agrees to bring her to Lou's big opening night.
Naturally, the unglamorous Danny is mistaken for Tina's mysterious lover. Emotionally aggrieved mafioso Johnny Rispoli (Edwin Bordo) dispatches his murderous brothers Vito and Joe (Paul Greco and Frank Renzulli) to restore his wounded honour, and director Allen's picture becomes a mildly amusing chase comedy.
Watching various characters stumble about in a warehouse containing the Macy department store's Thanksgiving Day Parade balloons, I found myself musing on the mysterious nature of the creative process. Is it possible that Woody Allen dozed off to sleep one night while watching the failed Farrah Fawcett-Majors feature Somebody Killed Her Husband (1978)?
It's remarkable how much of that utterly unremarkable movie is recycled through Allen's current offering. And, no surprise, it's no more entertaining in pretentiously arty black and white.
I also wondered if  the name "Danny Rose" was an unconscious reference to Reginald Rose, the author of the previous picture's screenplay.
Like the comedians sitting around the restaurant table, Allen is marking time. A standardized, production-line product, Broadway Danny Rose is ho-hum filler fare, a slice of leftover turkey reheated for the post-Christmas movie market.

Afterword: Broadway Danny Rose was the prolific Woody Allen's 13th feature film. Released between two works of considerable creative imagination — 1983's Zelig and The Purple Rose of Cairo (1985) — I thought it was was a major disappointment. Not that it mattered. Allen had reached the point in his career where he was being hailed as an American auteur. By 1984, he'd won two Oscars (writer and director for 1977's Annie Hall) and been nominated for three others. Broadway Danny Rose earned Allen another two nominations. Since then he's received 14 more nominations, and won two additional Academy Awards for his screenplays. Of some interest today is the fact that the plot of his 15th feature, 1986's Hannah and Her Sisters, includes at least three family Thanksgiving gatherings. Although I found much to enjoy in the early Allen oeuvre, by the late 1980s an off-putting ick factor was showing up in his pictures. Eventually Allen's personal peccadilloes became more more newsworthy than his movies, and I lost interest in him and them. That said, I did produce reviews of at least half of his 45 feature films to date, and I expect that eventually they'll all find their way into the Reeling Back archive.