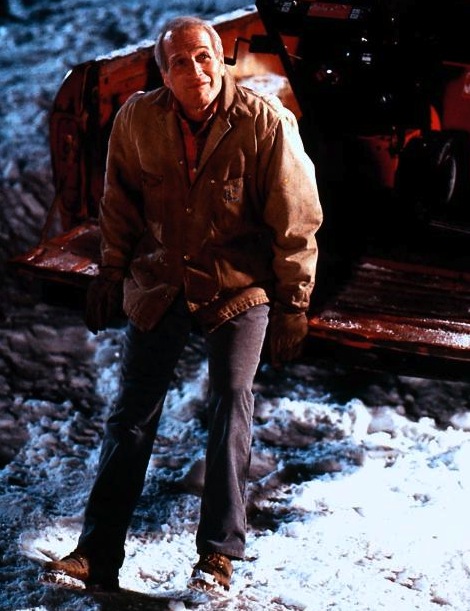 Working man "Sully" Sullivan (Paul Newman) contends with the realities of life in a freelance economy during the Northeastern holiday season.


What counts is doing right by kids and dogs


On the fourth day before Christmas, my TV gave to me . . . Continuing with a list of movies, checked over twice, containing titles both not-my-cup-of-tea and nice. I've chosen an even dozen from the pool of productions endlessly rebroadcast during our ever longer Yuletide. Today (Dec. 21), in keeping with the unexpectedly gritty One Magic Christmas (1985), Reeling Back considers 1986's Nobody's Fool. You may wish to click the Read More button now, though, as I'm going to take time out to repeat my holiday rant. Although I don't buy any of the "war on Christmas" nonsense peddled by the Fox and Sun news networks, I do regret the front-loading of the season at the expense of the traditional 12 Days of Christmas. The modern mercantile version of the season-to-be-jolly has repositioned December 25, making what was once the First Day of Christmas, the last. Thereafter, it's on to the "after-Christmas" sales. What's been lost is the winter solstice moment, that midwinter festival recognizing the rebirth of the land that comes after the year's longest night. It lasts until Twelfth Night (Jan. 5) and makes good sense regardless of your religious beliefs. It also comes closer to my idea of a merry Christmas.

Friday, January 13, 1995.
NOBODY'S FOOL. Based on the novel by Richard Russo. Music by Howard Shore. Written and directed by Robert Benton. Running time: 118 minutes. Rated Mature with the B.C. Classifier's warning "occasional nudity, very coarse and suggestive language." THEIR TIMING COULDN'T be better.
Biz buzz can be heard linking the names Paul, Rob and Oscar. Their feature, Nobody's Fool, is touted as a contender in the picture, actor and director categories.
With Paul Newman said to have a lock on a nomination, writer-director Robert Benton's winter-light drama opens here today. By happy coincidence, January 13 is also the day that Academy Award ballots go into the mail in Los Angeles.
Their subject could be timely. If, as the political pundits say, white male rage is the secret ingredient in the so-called Republican revolution, then Benton's parable of curmudgeonly persistence rewarded is the very thing for the new Newt-onians.
* * *
NAME GAME — Yes, there's already a Nobody's Fool available in the video stores. The directorial debut of Jonathan Demme's ex-wife Evelyn Purcell, it was a 1986 theatrical release. Based on an original screenplay by Pulitzer Prize-winning playwright Beth (Crimes of the Heart) Henley, it was a romantic comedy. Rosanna Arquette starred as a would-be actress involved with Eric Roberts.

Afterword: Both Paul and Rob did, in fact, receive Oscar nominations — Newman for Best Actor and Benton for Best Screenplay. Neither won. For Newman, it would be his ninth nomination of a lifetime total of 10. Remembered for his philanthropy as well as his acting, he carried home an honorary Academy Award in 1986, and the Jean Hersholt Humanitarian Award in 1994. His single acting win was for The Color of Money (1986). For Benton, the nomination would be his seventh of seven. He could console himself with the fact that he already had a matched set, the screenplay and director trophies for 1979's Kramer vs. Kramer.