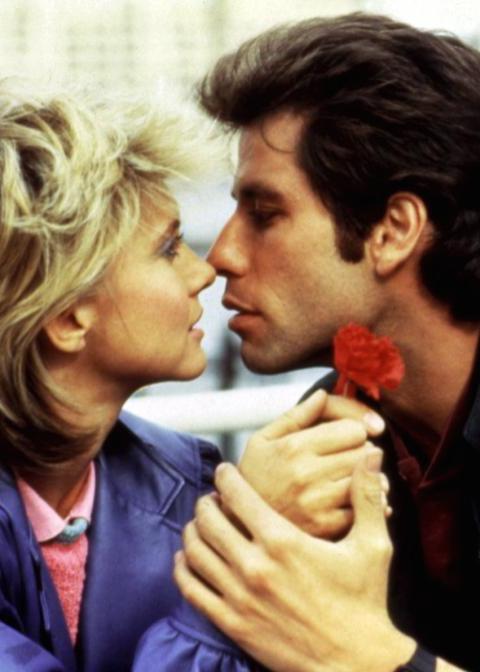 The fate of all mankind depends on the strength of the love between Debbie Wylder (Olivia Newton-John) and Zack Melon (John Travolta) in director John Herzfeld’s 1983 rom-com Two of a Kind.


Winners of the first annual Academy Awards were announced on this day (February 18) in 1929. Actor John Travolta, who was born on this day in 1954, has had two nominations so far, though neither was for his reunion with Olivia Newton-John in the 1983 comedy Two of a Kind.

Tuesday, January 10, 1984.
TWO OF A KIND. Music by Bill Conti. Written and directed by John Herzfeld. Running time: 90 minutes. Mature entertainment with the B.C. Classifier’s warning: some very coarse language, occasional nudity and suggestive scenes. DON’T THEY GO WELL together? Like acne and awkwardness, or ignorance and bliss, John Travolta and Olivia Newton-John are Two of a Kind.
Five years ago [1978], they co-starred in the movie adaptation of Grease. Newton-John was a fresh-faced new presence; Travolta was at the top of his Saturday Night Fever form.
Together, they were credited with making TV director Randal Kleiser’s lead-footed debut feature a big, big hit.
Megabucks, baby. What better reason for the stars to stage a reunion?
In the deadly dull Two of a Kind, pouty John plays Zack Melon, a would-be inventor up to his ears in debt to a violence-prone loan shark.
Aussie Olivia is Debbie Wylder, a teller at the bank that he decides to rob in a desperate attempt to square his account with the aforementioned shark.
They are under the inconsequential direction of John Herzfeld, another television alum making his big screen debut. Together, they are all involved in one of the most stupefyingly dumb movies of 1983, a year that gave us such mush-minded films as Flashdance and Stayin’ Alive.
Two of a Kind opens in heaven. Returning from a vacation, God (the voice of Gene Hackman) expresses disappointment in the stewardship of His angels. He is of a mind to flood the Earth and start over from The Beginning.
Led by Charlie (Charles Durning), angels Ruth (Beatrice Straight), Earl (Scatman Crothers) and Gonzales (Castulo Guerra) argue the case for Mankind. They strike a bargain with the Almighty — a reprieve for all men if self-centred losers Melon and Wylder turn into self-sacrificing lovers within a week.
Doesn’t that just sound like the sort of nice-Nelly nonsense that the writer-director of a bunch of network television Afterschool Specials would come up with? Do you doubt for a moment that true love will conquer all?
Doubt. The enemy here is not the devil Beazley (Oliver Reed) — whose mission it is to thwart God's plan — but double boredom.
Travolta is a disaster in a role that might have been written for the puppy-doggish Robby Benson. Travolta turns 30 next month [February,1984], so his teenaged mannerisms here are less ingratiating than ridiculous.
Newton-John appears downright wasted. The last five years have not been kind to the pop singer, and her freshness has given way to the look of a woman who has bean around the block once too often.
Two of a Kind, the reunion that nobody needed, is an hour-and-half-long yawn.

Afterword: A movie star for some four decades, John Travolta has appeared in many memorable movies, as well as some quite forgettable ones. Most people will recall his Oscar-nominated performance in the 1977 dance-drama  Saturday Night Fever. Two of a Kind, the one released between the Saturday Night Fever sequel Staying Alive (1983) and his aerobics-dance epic Perfect (1985), is among those that seem to have been erased from fan memory. There was no mention of it in the many reports of his January 27, 2018 “reunion” with Grease co-star Olivia Newton-John. The occasion was the annual G'Day USA event in Los Angeles, a celebration of the relationship between Australia and the United States. Celebrity reporters gushed about the 40th anniversary of their pairing in Grease, ignoring the 35th anniversary of a picture that more than qualified as a reunion.
What it didn’t qualify for was hit status. The result was a career low point for the actor, and five years of relative inactivity. That changed following a 1989 working visit to Vancouver, where he starred opposite Kirstie Alley in writer-director Amy Heckerling’s imaginative rom-com Look Who’s Talking. It was a hit, one large enough to prompt their reunion a year later for Look Who’s Talking Too, and a third time for 1993’s Look Who’s Talking Now. His comeback was confirmed when he received his second Academy Award nomination, following the success of writer-director Quentin Tarantino’s 1994 feature Pulp Fiction. John Travolta celebrates his 64th birthday today (February 18).