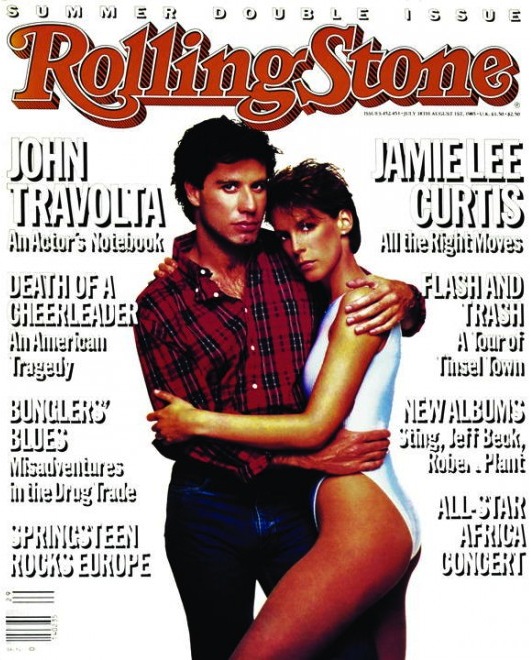 
On this day (November 9) in 1967, the first issue of Rolling Stone Magazine arrived on the newsstands. Founded in San Francisco, it emerged during the last great crisis in American journalism, the one brought about by the Vietnam War and the counterculture movement that it inspired. Responding to the success of such "underground" news weeklies as the Berkeley Barb and the East Village Other, former student journalist and rock music fan Jann Wenner borrowed $7,500 to start his own magazine. His biweekly created its own niche, somewhere between the entertainment trade paper Variety and The National Enquirer supermarket tabloid. Targeting the young adult audience, it nurtured such distinctive writers as Hunter S. Thompson, the gonzo journalist who became the subject of at least two movies; Cameron Crowe, now best known as a Hollywood film director; and Joe Eszterhas, remembered for his big-bucks screenwriting fees for such pictures as 1992's Basic Instinct and Showgirls (1995). Wenner's own journalistic credibility took a serious hit in 1985 with the release of Perfect. A movie based on a Rolling Stone article, it featured Wenner in a supporting role as the magazine's editor in chief. The real-life publication's shameless promotion of its reel-life reflection underscored just how little distinction there was between advertising and editorial in corporate media in fin de siècle America.

Monday, June 10, 1985.
PERFECT. Co-written by Aaron Latham, based on his series in Rolling Stone magazine. Music by Ralph Burns. Co-written, produced and directed by James Bridges. Running time: 118 minutes. Mature entertainment with the B.C. Classifier's warning: occasional very coarse language, nudity and suggestive scenes. JUST ONE LOOK. THAT'S all it takes for aerobics instructor Jessica Wilson (Jamie Lee Curtis) to size up Rolling Stone reporter Adam Lawrence (John Travolta).
"Not another one of those pieces about how health clubs are turning into the new singles bars," she says, glaring disdainfully.
"No," he squirms. That's exactly what he has in mind, of course.
"No," he lies, flashing a greasy grin.
Just one scene juxtaposition. That's all it takes to take the measure of Perfect, writer-director James (Urban Cowboy) Bridges's latest contribution to Western culture.
Midway through the film, Jessie accepts Lawrence at his word and goes to his Los Angeles hotel room. Through the bedroom door, we see them tussling happily beneath the sheets.
The scene cuts suddenly to Jessie's exercise class at the Sports Connection health spa. It is the next day, and Adam is among the dozens of participants.
Set to rock music, this interminable contemplation of pelvic thrusts and knowing looks goes on and on and on. By cutting directly from their sexual encounter, Bridges deliberately infuses a Bacchanal mood into the scene, with actress Curtis cast as a mass market Marilyn Chambers. The cinematic grammar makes it clear what kind of movie we're watching.
Perfect, says Bridges, "is about how the First Amendment should protect all the media." His screenplay, written in collaboration with actual Rolling Stone writer Aaron Latham, has the Lawrence character working on two stories simultaneously.
One involves interviewing Joseph McKenzie (Kenneth Welsh), a John DeLorean-like businessman on trial for alleged dope dealing. The other is a happy-go-lucky expose of the latest California kink, "looking for Mr. Goodbody," a semi-literate hatchet job that focuses on ingenuous Linda Slater (Laraine Newman), "the most used piece of equipment in the gym."
Bridges borrows the interwoven story format from the respected television series Lou Grant. His crotch-level concerns, however, owe more to the style of Larry Flynt, publisher of the blue-collar men's magazine Hustler.
Jessie gets it right when she calls Lawrence "a sphincter muscle." Perfect resembles nothing so much as the product of such a muscle's movement.

Afterword: Although I didn't mention it in the review, the film was "inspired" by screenwriter Aaron Latham's article, "Looking for Mr. Goodbody," the June 9, 1983, Rolling Stone cover story. The title was a riff on Looking for Mr. Goodbar, Judith Rossner's 1975 bestselling novel and its 1977 film adaptation. Apparently I wasn't the only one who really disliked Perfect. Most reviews were negative and people stayed away in droves. The picture failed financially and was a major career setback for John Travolta. Two years later, Christopher Reeve starred in a film called Street Smart, a gritty examination of celebrity journalism that managed to get it right.

See also: As a newspaper film critic, I've always been fascinated by images of the reporter in the popular culture. The Reeling Back website was launched with a package of 13 restored reviews and features based on the theme of Newspapering in the Movies. Included were such obvious items as All the President's Men and the 1974 remake of The Front Page, as well as personal favourites such as Norman Jewison's period comedy Gaily, Gaily and the musical Newsies. There were three more American features — The Paper, the above-mentioned Street Smart and Superman (recalling that Clark Kent was a working reporter) — and three Canadian surprises: High Stakes,  Impolite and Why Rock the Boat? Rounding out the coverage was a Press Gang Quiz featuring Canadians who've played reporters in the movies, and my review of Alex Barris's 1976 book Stop the Presses! The Newspaperman in American Films. Since then, I've added Citizen Kane and two movies about broadcast journalism: Hero and Network.