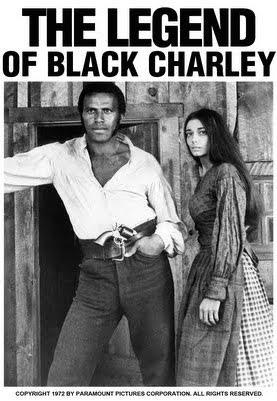 Charley (Fred Williamson) and his ally Sarah (Tricia O'Neil) are featured on the poster provided to theatres that preferred not to use the N-word in their advertising for director Martin Goldman’s 1972 western The Legend of Nigger Charley.

Revenge a result of rage


As 2018’s Black History Month comes to an end today (February 28), the mid-month release of a motion picture called Black Panther will be remembered among its lasting highlights. Based upon a Marvel Comics character created in the mid-1960s, the film’s worldwide box-office gross will soar to over $1 billion, according to the business press. Its popular hit status has been accompanied by a chorus of serious critical praise from the likes of Johns Hopkins social historian Nathan D.B. Connolly, who calls it "a breakthrough in black cultural representation.” I’ve been assured by a fellow critic (who is aware of my lack of interest in superhero movies) that I must see this one. Because I respect her good taste, I will eventually take her advice. For the moment, though, I can’t offer any insight on Black Panther, a film I haven’t seen. What I can do is recall a previous moment when Hollywood, never known for its racial diversity, took note of the presence of a boxoffice opportunity, and attempted to exploit it with “a breakthrough in black cultural representation.” In 1966, the year that Marvel introduced its Black Panther, the FBI was waging a covert war on an African-American social movement called The Black Panther Party. Between 1969 and 1977, moviemakers pandered to black urban audiences with a subgenre of anger-charged “blaxploitation” pictures. In 1972, a white writer-director, Martin Goldman, contributed The Legend of Nigger Charley.

Afterword: In the introduction to the above review, I emphasized corporate Hollywood’s historic lack of interest in cultural diversity. If covering the film beat taught me anything, it was that movies were made to make money. Since the invention of the motion picture in the late 19th century, its much-honoured arts and sciences have been in service to the entrepreneurs who financed its development, men who cared little for anything other than profits. The business model that emerged consisted of three essential elements.
At one end were the producers, the moguls who ran the “dream factories” where films were made. At the other end were the exhibitors, the showmen who owned and operated the theatres where people paid to see pictures move. Between them, and vital to the commercial venture, were the distributors. Largely invisible to the public, the “distribs” (as they were known in the trade press), insured that the money invested in the “product” generated a tidy profit for everyone involved. The system worked best when its three parts were vertically integrated, with one company (for example, Paramount Pictures) owning the production studio, the distribution company and a theatre chain. In place for more than twenty years, it was supposed to have ended in 1948, when the U.S. Supreme Court ruled in United States v. Paramount Pictures, Inc. that such arrangements were in violation of U.S. antitrust law. The American media landscape has changed significantly since then, but that’s another story.
And what does any of this have to do with the arrival of a movie called The Legend of Black Charley on the Strand Theatre marquee? Vancouver, Canada’s Pacific metropolis, did not then have a significant urban black population. Even so, the city’s predominantly white and Asian movie audiences were able to view (and I had the job of reviewing) most of the blaxploitation pictures released during the life of the subgenre. And why was that?
As I pointed out in the “Truth in Advertising” addendum to the above review, U.S. court rulings did not have jurisdiction in Canada. The system of vertical integration that had been upset in the U.S. continued to exist north of the border. Paramount Pictures owned both a distribution arm and Canada’s largest theatre chain (Famous Players). The practice of block booking, a contract that obligated exhibitors to play any and all films released by a distributor, remained the working business model. That meant that the Paramount Pictures feature, The Legend of Nigger Charley, was guaranteed at least a week of screen time in Vancouver, whether or not anybody went to see it. The system pretty much guaranteed that Canadian-made movies would not have access to those screens, limiting any chance for a domestic film industry to compete with the U.S. behemoth. And that, too, is another story.